Now that the City’s campaign to vaccinate highly vulnerable communities has ended, what progress was made in reducing the vaccination gap between Protect Chicago Plus community areas and the citywide average?

An analysis by the Weekly shows that the gap between targeted ZIP codes and the rest of the city has actually increased over time. That is, the Protect Chicago Plus program fell short of its stated goal to “get these communities at or above the citywide vaccination rate.”

That same week, South Side Weekly launched ChiVaxBot, a daily Twitter bot highlighting the geographic disparities between who was dying from COVID-19 and who is fully vaccinated.

However, by May 25, as vaccine supply improved, the gap had grown to eight percentage points, with the citywide average at forty-one percent and the Protect Chicago Plus average at thirty-three percent. 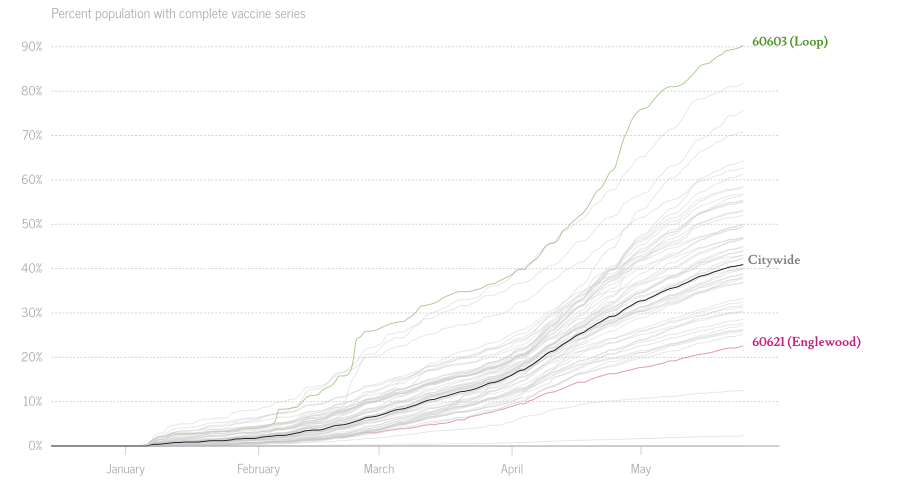 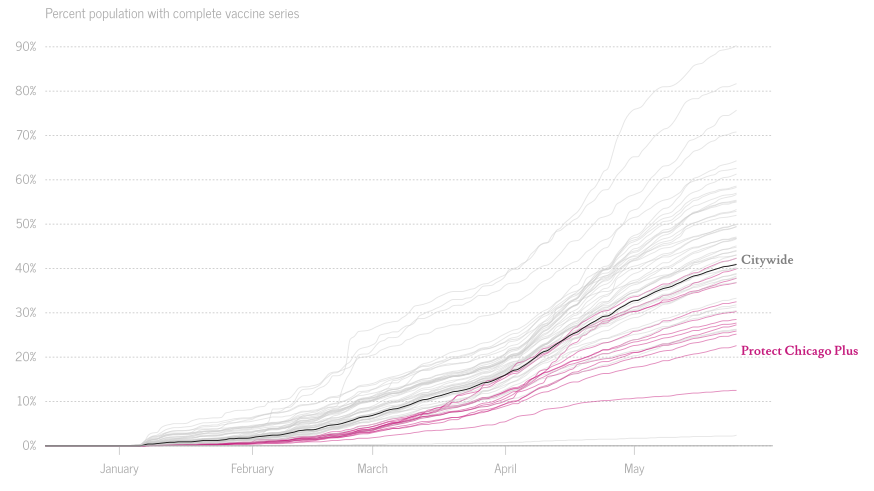 Even though the percentage of fully immune residents across all ZIP codes is rising, the daily Twitter maps that ChiVaxBot posted have not appeared to change much, causing some confusion—that’s because despite the increase in vaccination rates across the city, the disparity between the South and West Sides and the rest of the city remains.

After nearly five months of reporting who is dying from and who has been fully vaccinated for COVID-19, we’ve decided to update the bot to also illustrate change over time. Starting next week, we will be threading a second daily tweet that shows a GIF (an animated graphic) of fully vaccinated residents by ZIP code, and how the percentage has changed week by week.

On February 25, a month after Protect Chicago Plus launched, fewer than ten percent of most ZIP codes’ residents were fully vaccinated. A month later, wealthier ZIP codes on the North Side—as well as in Hyde Park, Beverly, Morgan Park, Mount Greenwood, Garfield Ridge, and Clearing—were in the ten to twenty percent fully vaccinated range, while the rest of Chicago remained under ten percent.

Towards the end of April, the percent of fully vaccinated residents in many South and West Side ZIP codes had improved, but were still far behind areas on the Far North Side and in the Loop.

The first ZIP codes to pass the fifty percent fully vaccinated mark were in Lakeview and near the Loop, but less than a third of residents in South Side neighborhoods like Englewood and Riverdale were fully vaccinated.

We hope that this clarifies that vaccination rates in several neighborhoods are in fact increasing, while still keeping an eye on the divide between the South and West Sides and the rest of the city.

With the program officially over, the city is using their mobile vaccination bus to make immunizations more accessible to four South and West Side neighborhoods. As of press time, the bus is stationed in South Shore on Wednesdays, Englewood and Roseland on Thursdays, and Austin on Fridays; and will offer either a single-dose Johnson & Johnson vaccine or a two-doze Pfizer vaccine. Anyone over the age of twelve is eligible—no appointment necessary.

In early June, CDPH announced door-to-door canvassing plans to increase their hyperlocal vaccine outreach. The City are focusing on the following thirteen communities to start, many of which were a part of the initial Protect Chicago Plus efforts: Auburn Gresham, Austin, Chatham, East Garfield Park, Englewood, Hegewisch, Montclare, Riverdale, Roseland, South Deering, South Shore, West Englewood, and West Garfield Park. Canvassing teams will visit every home in each of these neighborhoods to promote and facilitate vaccination; they will share information about nearby vaccination sites and events, as well as identifying seniors and others who might need at-home vaccinations.

As Chicago reopens and masking and social distancing guidelines loosen, increasing vaccination rates and closing the vaccination gap between the two Chicagos will be even more important.

For updates on both, you can follow @ChiVaxBot on Twitter. For more information on local and pop-up vaccination events, you can visit the City’s vaccine event calendar on their website.

Charmaine Runes is the Weekly’s director of fact checking and a recent graduate of the University of Chicago’s Computational Analysis and Public Policy program. She last wrote about Black running groups on the South Side.