What I love about mulled wine is what I love about so many of my favorite recipes and novels. A drink with an ancient origin, mulled wine has circulated continents and cultures throughout time. And, as the cocktail features aromatic spices from Asia and the Middle East that reached the wine-jar courtesy of the Ottoman Empire, it is itself a favorite daughter of that same cross-pollination. Mulled wine pops up at key moments in history—first-century Greco-Roman cookbooks, sixth-century Arabic poetry, Charles Dickens’s depictions of nineteenth-century Victorian England—before vanishing again, and travels under different names depending on whether the surroundings are Nordic, Iberian, Turkish, Brazilian, Chilean. Preparing and drinking it is, in a way, “an engagement with other times, spaces, and practices that suggest worlds lost.” Its composition, like its history, is (forgive me) muddled.

This is also what I love about mulled wine—that it is less a cocktail and more a genre of hot, spiced, boozy beverages, comprised of an amorphous ingredient list in which each and every element can be discarded, reworked, and replaced save for the wine—and even that can be cheated out with juice. In Elizabeth Raffald’s 1769 recipe in The Experienced English Housekeeper, the wine is thickened with beaten egg yolks, poured back and forth to froth like teh tarik, and served with pieces of dry toast cut into narrow soldiers. The version in the Apicius, a Roman collection of recipes compiled in the first century and one of the oldest cookbooks in the world, is a spiced wine recipe called conditum paradoxum—which translates to something in the vicinity of “surprise wine”—and features an infusion of bay leaf, saffron, and sweet dates with the stones, strained through charcoal. In Sanam Lamborn’s “Persian fusion” version,which also features pomegranate, the wine is simmered with orange peels studded with cloves; in other versions the citrus is sliced, sugared, and baked into caramelized rounds. Mulled wine’s most generous quality is its flexibility. You don’t really need a recipe—in a pinch, you could just make a summer sangria and heat. Still, mulled wine is a no-fuss triple-hitter: aromatic, vaguely “medicinal,” and the brew lends itself to poetry. In the 1585 Elizabethan-era cookbook The Good Huswifes Jewell, English author Thomas Dawson instructs: “You must bruise every kind of spice a little”—apt advice for a life richly lived. This recipe features my favorite fruits and spices—pomegranates because it is their season, cardamom and golden raisins for an Indian touch.

I use a 3–4 quart slow cooker, but you can also make this mulled wine in a really big pot on very low heat!

2 bottles of red wine (Use something cheap and sweet, and which could be described as “fruity” or “jammy.” A Shiraz or Cabernet Sauvignon works great, but you can use literally anything!)

Apple cider or a fruit juice of your preference

2–3 sticks of cinnamon, crushed with a knife

1 star anise petal (or, depending on taste, the whole pod)

1–3 citrus fruits of your choice (I prefer a mix of blood oranges and navel oranges, but you can

also use grapefruit or even add a lime) sliced very thin into full circles, keep the peel!

Optional: Sometimes I also cut up an apple in the same way, into paper-thin slices

Golden raisins (they will rehydrate in the wine and plump up)

Optional: You can add a fourth cup of honey or maple syrup to taste.

Optional: A teaspoon or two of port wine to add to each cup when serving as a finish. If you are really into port, you can also sub in a bottle of port (ruby port or tawny port) for one of the bottles of wine at the start! 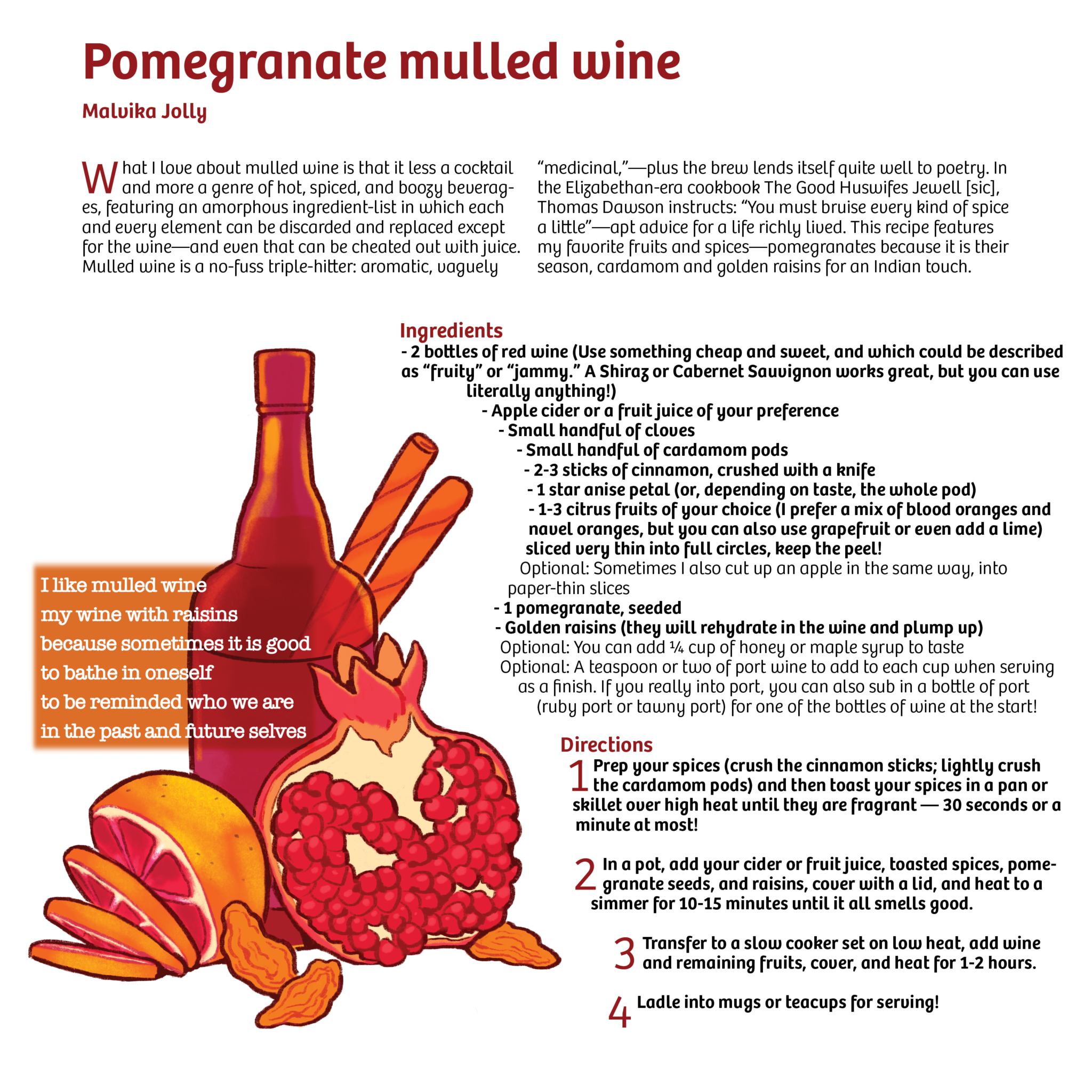 Malvika Jolly is from the South Side of Chicago. She lives in New York and tweets at @dinnertheatrics. She last contributed an interview with architecture critic Lee Bey to the Weekly in October 2017.