Twenty-two year old Raymond Shaq McDonald was a child when the high rises at Cabrini-Green fell. Nijole Kasuba, a grandmother now, was just seven when her family decided to flee the advancing Red Army after they saw family members deported and killed in Siberia during the first Soviet Occupation in the 1940s. Their stories of displacement might seem very different, but last Saturday’s event, part of Inherit Chicago’s intercultural festival, explored the similarities in these stories of displacement.

The Chicago Cultural Alliance is an organization that connects different ethnic museums, cultural centers, and historical societies across Chicago. The organization intends to “connect, promote, and support centers of cultural heritage for a more inclusive Chicago” and launched Inherit Chicago, a series of events around the city, for the first time this year. Included in the programming was this panel discussion about displacement at the Balzekas Museum of Lithuanian Culture in West Lawn.

The discussion centered on stories of displacement from both the Baltic nations and public housing in Chicago. It was an odd pairing that Robert Smith, Associate Director of the National Public Housing Museum, acknowledged in his opening remarks. “In conversations with each of the panelists over the phone and in person,” Smith said, “I’ve learned more and more about the shared experiences [of] the people from these two communities—[communities] who don’t share a language or a national homeland or perhaps much else in a highly segregated city like Chicago.”

Panelist Nijole Kasuba spoke about the loss of her family, her parents’ jobs, her home, and her country during the war. Her experience in the displaced persons camps, where two or three families would be in one room for upwards of five years, was different from panelist and current member of the Cabrini-Green Local Advisory Panel, Raymond Shaq McDonald’s experience of community organizing and marching. “We were fighting for our neighborhoods,” McDonald said. “Leading marches because we knew it was us versus them with their plans for transformation. It still felt like a war zone, but a different kind of war zone this time.”

The discussion had started with a brief history of public housing in Chicago, starting with background on the Chicago Housing Authority (CHA) Plan for Transformation in 2000. This plan was a pledge to rebuild 25,000 homes after the demolition of high rise public housing units at Robert Taylor Homes, Cabrini-Green, and elsewhere by 2009. As of today, the Plan for Transformation has been marked by long delays with minimal construction. CHA housing quotas have been largely filled with vouchers for housing in private buildings while large stretches of land in the State Street corridor intended for new public housing remain empty. Only about eight percent of displaced peoples have been relocated into mixed income housing.

Hearing stories of displacement from different time periods and different places shows that anyone can be displaced. The similar social and political powers that are able to displace peoples with impunity and the similar resistance of the people are particularly moving. But in connecting these stories of displacement, there is the potential for over-simplification of issues that are quite complex. While both McDonald and Kasuba were displaced from their childhood homes, for example, they lived through different fights at different times.

The Balzekas Museum, host of the displacement discussion, is currently featuring an exhibit called “No Home to Go To: The Story of Baltic Displaced Persons 1944-1952.” The persecution of Lithuanians by the Soviet Union in the mid- to late twentieth century is the exhibit’s theme.

The exhibit shows the history of Baltic immigrants to the U.S. through objects of memory, such as wedding dresses, toys, luggage, and more, serving as tactile reminders of the past. The memorabilia on display traces the specific paths of displaced persons from Lithuania, Latvia, and Estonia and their struggles in finding a new home. 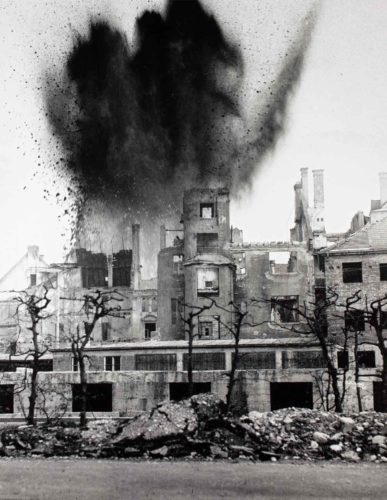 In a room filled with Lithuanian greetings of “labas,” it is clear that without the Chicago Cultural Alliance, connections between the displaced peoples of the Baltic region after World War II would not be readily made to displaced people in Chicago public housing. Yet the common stories of communities working to support each other while others try to tear them apart offers an inspiring cross cultural story of resilience.

While it was an informative discussion, questions still linger about the fate of displaced persons in Chicago and the fate of public housing. Eileen Ryan, an attendee at the event and a resident of Ravenswood, said, “I don’t know how I see myself fitting into the discussion around public housing. I don’t know if they gave a path forward, though I know there were some options like the woman from Pilsen said and community organizing and getting involved. So I think this panel reminded us that people are just like us or they’re one generation removed. We’re all human and we all need to be neighborly and help each other find decent housing. [Housing] is a human right that society doesn’t necessarily embrace. The cultural aspects are very good but also how to create action—that is often the next step that doesn’t happen.”

The Baltic displacement of peoples is a historically important event and the Balzekas Museum of Lithuanian Culture is right in telling this history. But what type of role will the National Public Housing Museum play in Chicago as people fend off further cuts and “redevelopment” in an ongoing public housing battle? As a museum whose goals are to “preserve, promote, and propel housing as a human right,” their institutional role within contemporary politics remains unclear. If we are to take seriously the lessons of Baltic displaced peoples, perhaps it is also necessary to take preventative actions that stop future losses right here in Chicago.

The National Public Housing Museum is set to open in Chicago by the end of 2018. Their current exhibit “Housing as a Human Right: Social Construction” is open until January 8 at 625 N. Kingsbury St.

Tenants Going Through “Hell” at 312 Properties

Why the current system to address unsafe housing structures isn’t cutting it, from the author of a new book on the subject

Management has broken promises, violated housing laws, and ignored complaints for years. Now tenants are banding together to fight for their rights

Tenants Going Through “Hell” at 312 Properties

Why the current system to address unsafe housing structures isn’t cutting it, from the author of a new book on the subject

Management has broken promises, violated housing laws, and ignored complaints for years. Now tenants are banding together to fight for their rights