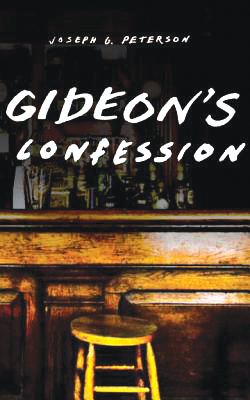 Most people feel aimless or apathetic from time to time, but for the title character of Gideon’s Confession, stasis is a way of life. Describing himself as “a compass without a magnet”—directionless —he wallows in indecision about his career and his life, enabled by regular checks from a generous uncle. Though Gideon recounts his story without shame, or even the sense that he ought to be ashamed, it’s clear from the start that he can’t keep this up without consequences. But Gideon’s Confession, the fourth book by Joseph G. Peterson, who lives in Hyde Park, does not seek to criticize its subject, antihero though he may be. Instead, it explores his motivations with nuance, turning a journey through Gideon’s psyche into a powerful meditation on the allure of inaction and the paralyzing effects of choice.

Gideon is defined by this paralysis; his every interaction with others is regulated by the knowledge that he, unlike them, just watches the time go by as he runs errands and gambles and lies in bed. But he is a compelling character because this attitude is not just rooted in a fear of failure, although that’s certainly a contributing factor. Instead, he seems to be held back chiefly by his genuine enjoyment of the world around him. At first, he asks, “What’s the point of piling up all these years?” and comes up empty-handed. But as he continues it becomes clear that life for him is not meaningless, so long as it isn’t joyless. He’s just disdainful of “the whole concept of working on a treadmill only to end up old and broken with your legs chopped off from diabetes or with a breathing hole poked into your throat.”

This awed pleasure in the world’s details is evident in, among other things, Gideon’s attachment to his surroundings. Gideon’s Confession, is a book that could happen anywhere. Yet it happens in Chicago: there are visits to Division Street and Second City, a view from Promontory Point of the leonine sun rising over the lake—even the late-afternoon light that Gideon describes as special to May here is recognizable. Peterson’s evocations of Chicago are undercut by the motif of New York as the place to go, where things are changing and alive. But that tension is essential, because it’s part of Gideon’s understanding of where he lives. To him, details such as the May sun aren’t a backdrop to his comfortable stagnant existence but rather an integral part of it. It can be hard to tell how much of this attachment comes from the pull of the city itself and how much is tied up in simple resistance to change, but he has put his roots down in Chicago, and he has friends and haunts he loves here.

In any case, Gideon’s sharp-eyed attention to those friends underscores his enthrallment with everyday life. As he narrates his own story, the focus is not so much on the details of scene—these Peterson evokes with just a few deft strokes— as on the details of the mind, and thus of character. Gideon shows a sort of captivated interest in the inner lives of his neighbor and sometime gambling buddy Walt, and his bartender-cum-confidant, Vic, if not nearly as much as he does in himself. He might not be the type to inquire deeply or with much concern, but he’s a great observer, at various points “fascinated by the tragic splendor of it all” and “in love with all of humanity.” In his telling, even minor characters leave their mark, from Horst, the former crewman of the U-boat in the Museum of Science and Industry who gives Gideon a brief summer job at his manhole factory, to the miserly funeral home owner John Boettcher, whose Cro-Magnon-like face and black garb recall the grim reaper.

Delving briefly into these individuals’ stories never comes off as a distraction, for though they may not have any major effect on the plot, they certainly have an effect on Gideon. Each small tale alters our perception of him, filling out the picture in a way that illustrates what kind of person he is—one who’s capable of living devoid of ambition, and how he came to be that way. They also point to the luxury of his position; few of the people he meets have the ability, economic or otherwise, to choose to do whatever they want. Although some of these asides drag on for a little too long, the overall effect is to make reading the book feel like listening to a well-spun yarn, complete with tangents and rich color.

At the same time, we’re given little reason to question Gideon’s sincerity. He appears to hold nothing back, and he asks for no forgiveness, either. If the book is a confession, the reader serves not so much as a priest as a companion on the next barstool, despite Gideon’s Catholic background and the soft religious undertones that occasionally appear in his language (he talks about wishing to be a disciplined teetotaler, “the true secular saints of this world”). There’s a kind of flirtation with the theme of redemption in the use of this subtle Christian motif, but it never feels central to the story, and Gideon’s friendly rather than penitential style actually allows his tale to feel truer and more intimate, unclouded by judgment or a fear of it.

Gideon’s best foil comes in the form of the book’s other extraordinarily candid character: his girlfriend Claire. Claire is ambitious and decisive, in comparison not just to Gideon, but also to nearly anyone else. Her plans for the future fill three pages. And those plans include Gideon: within a day of meeting him, she tells him that they’ll probably be married. But while Claire is stunningly forthright with Gideon, Gideon saves his deepest openness for us; he tells us things he obviously leaves out in their conversations. His relationship with Claire points to his basic problems with commitment; despite how well they work together, he continues to waver about whether to throw himself into the relationship emotionally, a problem only exacerbated by Claire’s asking him to join her in New York.

The story could veer off here into the belabored trope of the young man afraid of committing to a relationship. But this test arises from the same fundamental problem that stops Gideon from getting a job, and so instead it reveals the real trouble with his lifestyle. As Gideon lets months and then years pass as he hesitates to devote himself to anything other than getting drunk and spending his uncle’s money, it becomes clear that his refusal to choose hurts both him (despite his occasional assertions otherwise) and the people around him. The careful escalation of his inaction’s collateral damage and the struggle it creates within him are in many ways the book’s emotional core, and they shape it into something beyond a simple tale of indolence.

When something finally changes, the book swiftly concludes. The ending is abrupt, only pages long, and though it’s been set up for longer, it still feels short, a little too short to be entirely convincing. But that’s a minor lapse, and in a way it feels appropriate. Gideon has been frozen in time as the people around him change and grow; anything capable of overcoming that inertia must necessarily come as a sort of snap, or jolt.