A cold wind blew down South Gratten Street on a chilly November afternoon while Bridgeport residents outside stood in line for Benton House’s food pantry, donning jackets, scarves, gloves, and all. Seniors sat on plastic lawn chairs on the sidewalk with personal shopping carts in tow. Inside, toddlers bounced around the stairs while their mothers monitored them with hawk-like vision.

Benton House, the oldest social services organization in Bridgeport, comprises a couple of brick buildings next to a cul-de-sac, across the street from Bosley Park. Its food pantry is the only one of its kind in the neighborhood, serving food five days a week. According to Mey Lee, the former coordinator of the food pantry, over 134 households, primarily consisting of Latino and Chinese families, use the pantry in an average month; this roughly translates to over two thousand people. There has been consistent demand for the pantry’s services since it opened in 2009; a small, close-knit cadre of volunteers help move each day’s activities along.

Founded in 1907, Benton House housed Japanese families during World War II, was a nursery for children during influenza epidemics, and was featured on a Ghost Hunters episode for its resident ghosts—namely, the founder’s daughter, “Ma Benton.” While a longtime staple in the neighborhood, Benton House has seen many transformations, changes in ownership, and organizational structures over the past century. Most recently, on June 30 of last year, Benton House dissolved its residency program. Its executive director, Mark Lennon, needed help to keep up with the organization’s programming and building needs over the last few years. Lennon decide to establish a board of directors to help resolve the space’s issues, which included a $250,000 financial debt, as well as to bring resources to the space to address its slew of infrastructure problems and building code violations.

Most recently, Benton House has taken the form of a safe space for young and queer people of color; over the past few years the space has hosted art exhibitions supporting local talent, a radical film series, and female punk shows. It has also cultivated a community garden, housed a library shelved with manifestos on queer resistance and nonviolence, and facilitated a hunger walk in which hundreds of kids loaded onto school buses and walked along the concrete coast of Lake Shore Drive to raise money for the food pantry. All these programs and actions demonstrate the progressive spirit that has inhabited the space in recent years, but it is precisely this spirit that many former residents feel is at risk due to the creation of the board of directors and the recent change in management style.

This organizational restructuring led to a falling out between the former residents and the new board—before this transition, the residential staff oversaw the House’s delivery of social services, but now programming decisions are in the board’s control.

Lennon expressed remorse over the abruptness of the change, realizing that several residential staff invested much personal time and energy into this most recent iteration of Benton House and its place in the neighborhood. But he felt that a managerial approach to the space and its usage was necessary in order to address the organization’s infrastructure problems and debts. Despite the transition, which Lennon has referred to as a “period of flux,” Benton House has continued running the pantry five nights a week. The new board also plans to start after-school youth programs and oversee an expansion of its senior services this fall.

Rifts like this one are not unusual for a nonprofit, wherein organizational clashes naturally tend to come up. After the announcement last June, some of the residential staff chose to stay on as volunteers, while others decided to leave. Despite the clash, Lennon says Benton House remains devoted to its mission, as listed on its website, “to build a unified community that reflects the rich ethnic and socioeconomic diversity of the Bridgeport neighborhood, which can advocate for its needs, and works toward a vibrant, sustainable, and healthier community.”

But while Benton House’s stated mission remains the same, different visions still compete to answer the question of how best to actualize it. With new management, those who established the progressive legacy of Benton House mourn the potential loss of a queer safe space and hub for grassroots efforts, especially in the current precarious and harassment-filled political climate for minorities and LGBTQ individuals.

While Benton House has entered an uncertain moment in its trajectory, its century-long history has been nothing short of rich, aiding people from all walks of life.

The House is a rare breed: it stands as the last settlement house in Chicago.  Arising out of the same movement as Jane Addam’s Hull House, Benton House was founded in 1907 by Janett Sturges, a well-known philanthropist at the time. Originally called Providence Day Nursery, it provided meals and healthcare for children whose mothers worked in the local factories during the day with help from St. Paul’s Episcopal Church in Hyde Park. It also provided English classes and clinics on nutrition, hygiene, and housekeeping for the adults in the evenings. It typically cost five cents a day to use the services, and the majority of the families in Bridgeport at the time lived in poverty, but the nursery prided itself on never denying service to a child. At the time, the ethnic demographics of the neighborhood were changing: just under half of the clientele were Irish while the rest came from Polish, Italian, and Lithuanian families. In 1916, the building expanded to include a senior dining hall, which still exists today. 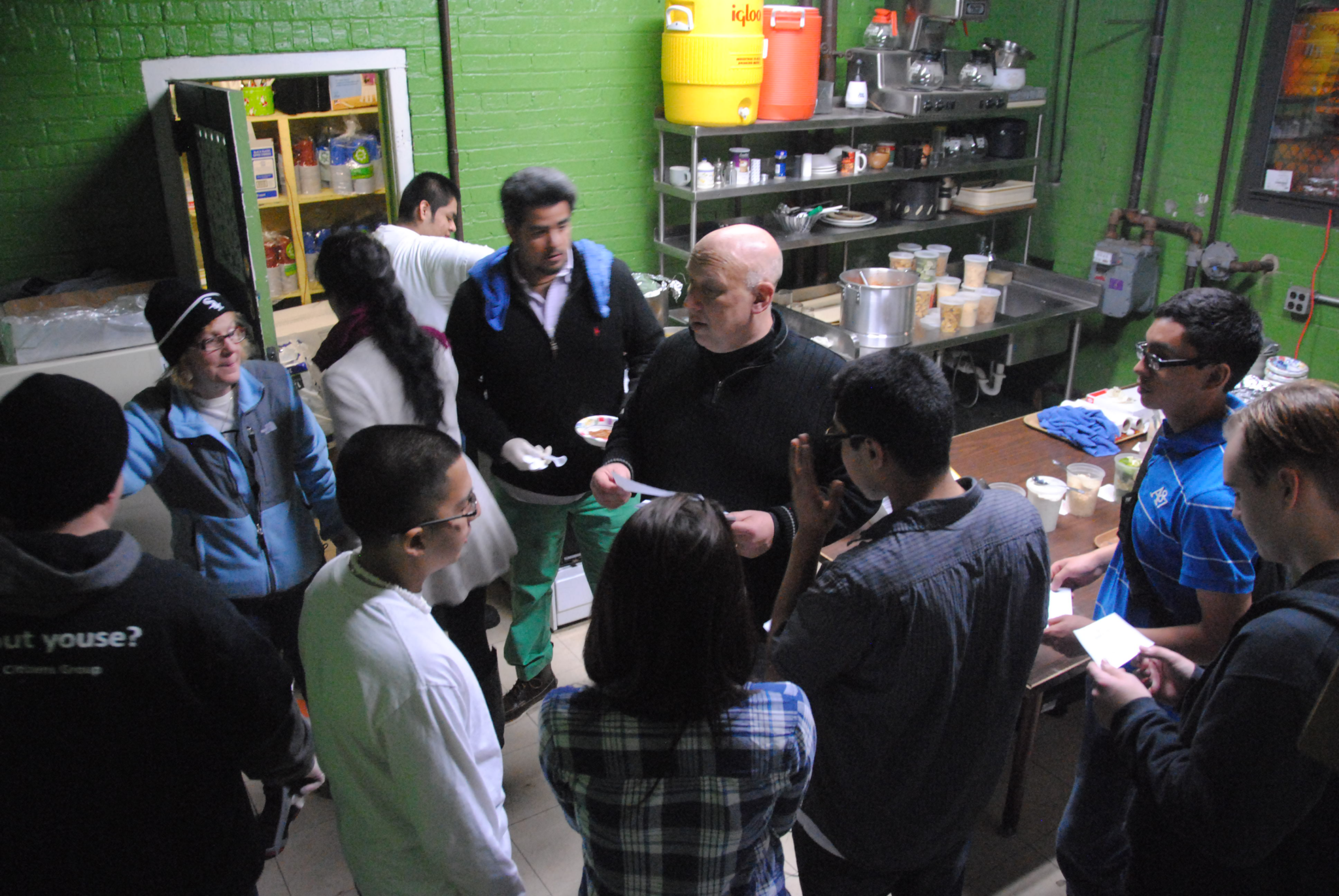 In the 1930s, under the stewardship of Sturges’s daughter Kate “Ma Benton” Sturges Buckingham (who donated the Buckingham Fountain to the city in honor of her brother), the nursery expanded its services and was later renamed Benton House. A 1969 Tribune article titled “Finances Cause Possible Closing of Benton House” reports that the house’s programs were funded by a city agency until 1967, after which funding was abruptly cut off, creating the need for trained and paid staff members for the formerly volunteer-run organization. In 1970, Benton House gained nonprofit status, but even back then a slew of infrastructure problems—leaky roofs, broken windows, and clogged toilets—plagued the space for the following decades. A combination of money came in from the local government and fundraisers were used to pay for these renovations. In a sense, the problems that Benton House has been dealing with over the past several months are not new—they, too, result from the neglect of social services at a governmental level.

While residential involvement in providing the House’s services varied throughout the 1970s and the early 2000s, it wasn’t until 2008 that a formal residency program was started by Mark Lennon. Lennon, born and raised in Bridgeport, has fond memories of stepping into Benton House in 1975 as a teenager to play basketball. He’s had a relationship with Benton House for over thirty years, first as a patron, and then eventually serving as the organization’s executive director. Keeping up the space felt impossible, he said, as the buildings seemed to be falling apart and the bills kept piling up. The residency program thus killed two birds with one stone: it put the large amount of space Benton House had under its name to use, and also remedied the infrastructural problems by offering residents rent-free living in exchange for helping with the space’s upkeep.

“The partnerships and relationships at Benton House become part of our institutional memory,” Noetzel says. “Otherwise Benton House would have been closed a long time ago.”

By pure serendipity, the gift of more space gave a new crop of residents a chance to create a new community vision, but this time the new residents were primarily people of color and people who identified as LGBTQ. The public service character remained strong, and this new dynamic opened up new opportunities for interaction between different types of people. As a result of this change in residential makeup, Benton House underwent yet another change. In the early 2010s the residency program became a more formal, intentional living community, united by shared values and a common ethos of service. As a part of this change, residents had more liberty to run and organize their own events at Benton House as long as they were beneficial to the neighborhood and received staff approval. This community comprised artists, activists, and former AmeriCorps members, many of whom identified as LGBTQ and/or as people of color. As such, Benton House came to be seen as a radical, progressive space, both by residents of the house and of the neighborhood at large.

The social services provided by Benton House remained unchanged, but there was a conscious effort among residents to create a platform for activism and political dialogue. Benton House acted as one of the few sanctuary spaces for queer people and people of color on the South Side, and the space’s reputation spread amongst young people in the city through word of mouth.

“The act of care and service has always been radical, even in the early days of Benton House as a settlement house,” said Mey Lee as she reflected on this time in the House’s history, composed and low-key with rainbow-haired troll dolls dangling from her ears. She was one of the residents who helped transform Benton House into a more inclusive space for grassroots activism. She began volunteering at the House in 2014. “What changed was that queer people and black and brown people were made visible in the space,” she said. “It was really transformative.”

According to Lennon, there was a deliberate effort in the early days of the residency program to diversify the staff of Benton House in order to expose longtime residents of Bridgeport, which is now only thirty percent white, to people who were different from themselves. Bridgeport’s cultural resistance to the civil rights movement of the 1960s still marks it as a neighborhood of racial tension. Benton House made an intentional effort to confront this past.

“I wanted to bring the world to the neighborhood,” Lennon said.

Benton House is part of Bridgeport’s political and social history, from its settlement house roots to its newfound progressive legacy. It’s still running the food pantry five nights a week, which is now a community staple, and plans to expand its youth and senior programming are moving forward. At this moment, the residency program is in a period of flux; another program may be created in the future.

Jose Corcoles, local filmmaker and former resident of Benton House,  remembers the tensions that surrounded the attempt to make Benton House into a safe space for queer people and people of color. “We got a lot of backlash from our neighbors. It was hard to build bridges,” Corcoles said. “Every day we got closer and closer to what kind of community we wanted, but it got torn apart when Benton House [temporarily] closed and changed management,” referring to last year’s announcement of the new board of directors.

Many former residents feel, as Corcoles does, that the new way of managing the space won’t necessarily give voice to all community concerns. Other invested parties, though, feel that without the financial security and resolution of its debts, it is untenable for the space to continue on without falling apart or shutting down. The process of building community is central to Benton House’s origin story, and has remained constant throughout its history. As the space stays open, it will no doubt continue to create community as it provides services to Bridgeport, but uncertainties linger about what kind of community that will be.

Did you like this article? Support local journalism by donating to South Side Weekly today.