The Chicago Department of Streets and Sanitation spent $3.87 million on overtime in April, according to internal records—more than half the amount budgeted for the entire year. Most of it paid City workers to sit in hundreds of trucks in anticipation of possible protests of police killings of Black and Brown people in Chicago and Minneapolis. About ninety percent of that month’s overtime went to truck drivers and truck supervisors.

On April 1, the department was already over budget on overtime. Mayor Lori Lightfoot’s 2021 budget allocated $7.36 million to Streets and Sanitation for overtime this year. Heavy snowfall in January and February cost a combined $11 million, and staging trucks across Chicago to defend against civil unrest that never materialized pushed overtime spending to nearly $15 million by the end of April.

The mayor’s fears of Chicagoans reacting to police killings of Adam Toledo, George Floyd, and Daunte Wright led her to mobilize an army of City workers. The Chicago Police Department (CPD) also preemptively switched to twelve-hour shifts and canceled days off in anticipation of protests.

The Weekly obtained records of overtime hours and pay from the Department of Streets and Sanitation via a Freedom of Information Act request, and has similarly acquired data on police overtime as part of a months-long investigation of the CPD. The documents reveal a blizzard of overtime that accumulated over an eleven-day period that saw mild weather and no looting. 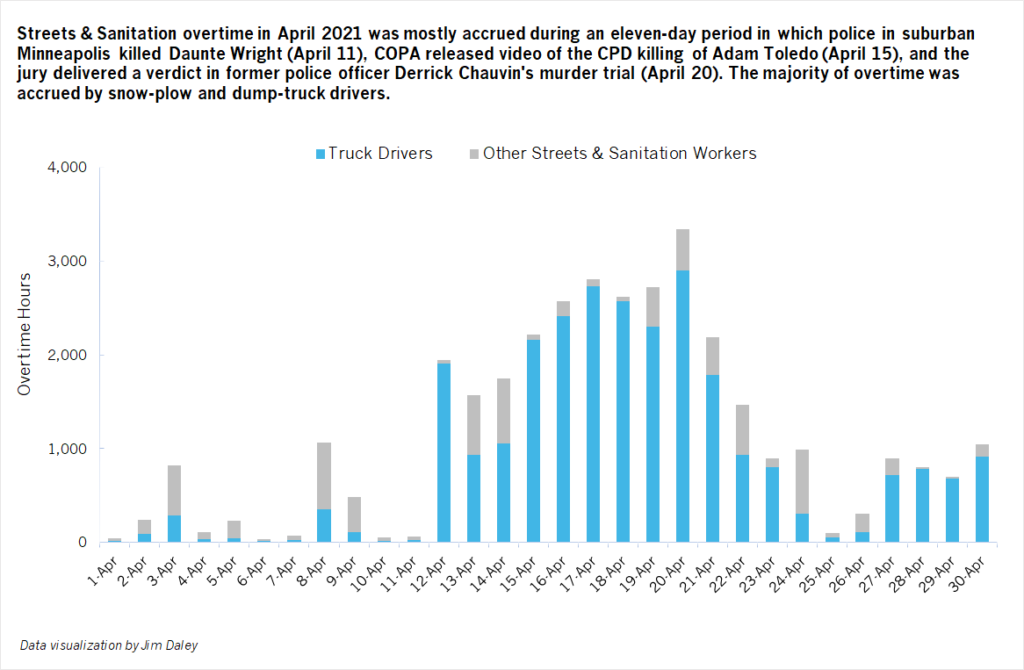 Paying drivers to sit in trucks across Chicago for days on end made April the fourth-most expensive month for Streets and Sanitation in terms of overtime in at least five years. The top three also occurred within the last year.

In August 2020, the department spent $4.2 million on overtime when the City similarly deployed trucks during the summer’s uprisings against police violence and racism.

Meanwhile, April 2021 had only a light dusting of snow on the twentieth. That month’s overtime spending was seven times higher than the previous five Aprils’ average. 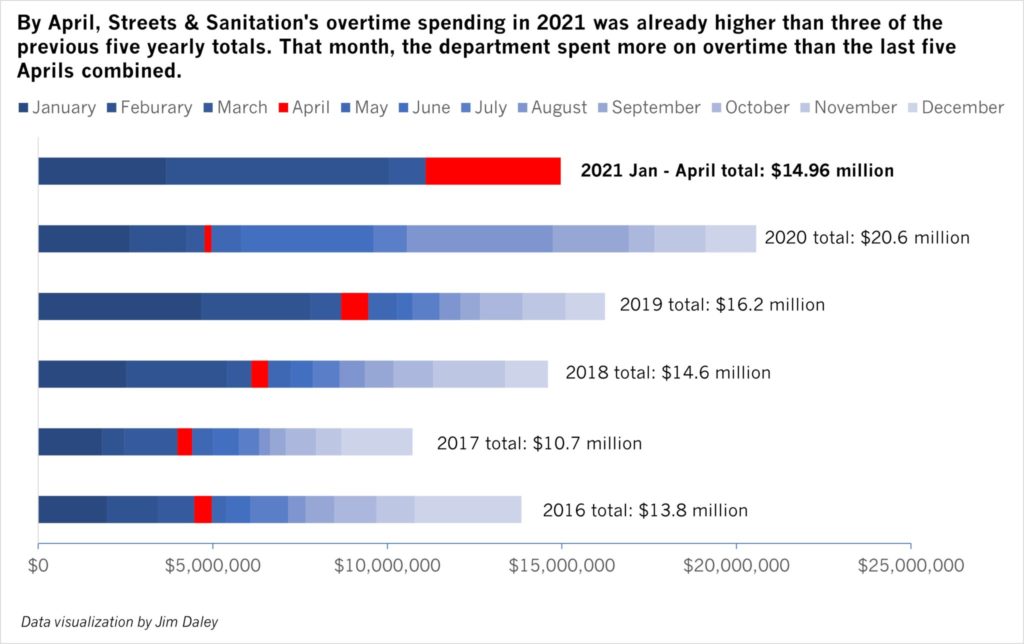 Three events in April caused Lightfoot, fearing a repeat of last year’s rebellions, to mobilize the sanitation trucks and the police. On April 11, a police officer in Brooklyn Center, a suburb of Minneapolis, shot and killed Daunte Wright, a twenty-year-old Black man, during a traffic stop. On the fifteenth, Chicago’s Civilian Office of Police Accountability (COPA) released body-worn camera footage of CPD officer Eric Stillman’s deadly shooting of thirteen-year-old Adam Toledo. And on April 20, a Minneapolis jury returned a verdict in the murder trial of former police officer Derrick Chauvin, who killed George Floyd in May 2020.

A deluge of overtime began on the twelfth and continued through the twenty-second. During that period, sanitation workers earned 21,685 hours of overtime, eighty-seven percent of which went to truck drivers and their supervisors.

The eleven days during which trucks idled around the City accounted for more than seventy percent of the overtime sanitation workers accrued in April.

At a press conference ahead of the Chauvin verdict, Lightfoot said 300 garbage trucks, snowplows, and water trucks were being deployed to protect commercial districts. “Don’t test us, because we are ready,” the mayor warned Chicagoans.

Chauvin was found guilty. There were zero riots and no civil unrest in Chicago. The trucks idled for days near commercial and retail corridors anyway.

That deployment resulted in the month’s highest single-day accumulation of overtime: sanitation workers clocked 3,340 hours of it, eighty-five percent of which went to truck drivers and their foremen, on April 20. 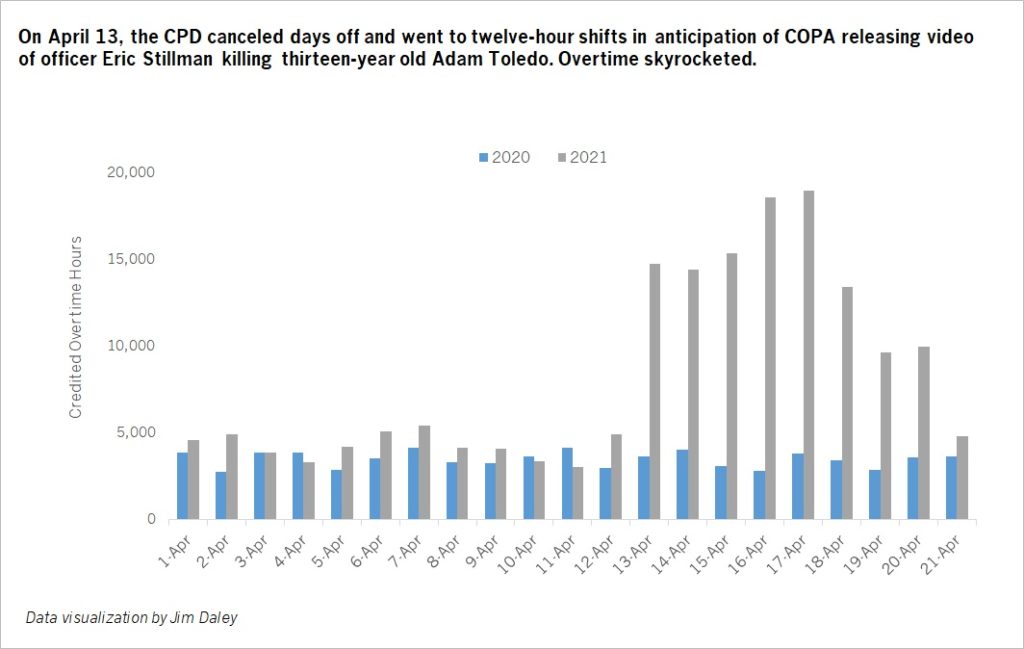 In addition to sanitation workers, police officers also saw a flood of overtime hours when the department canceled days off and switched to twelve-hour shifts to guard retail corridors and the Loop from looting that never occurred.

According to the data the Weekly obtained from the department, CPD amassed 171,018 hours of overtime during the first three weeks of April. More than half of those hours—some ninety thousand—were coded as being related to a protest or civil unrest. Despite the City’s posturing, there was no civil unrest that month.

The 2021 budget overview listed continuing “to develop and implement workforce management improvements with a focus on identifying processes that mitigate overtime costs across the City” among this year’s initiatives. In her budget address last October, Lightfoot said, “We also will continue to hold the line on overtime.”

At least through April, the mayor appeared to have forgotten that promise.

This reporting was supported by the Fund for Investigative Journalism.