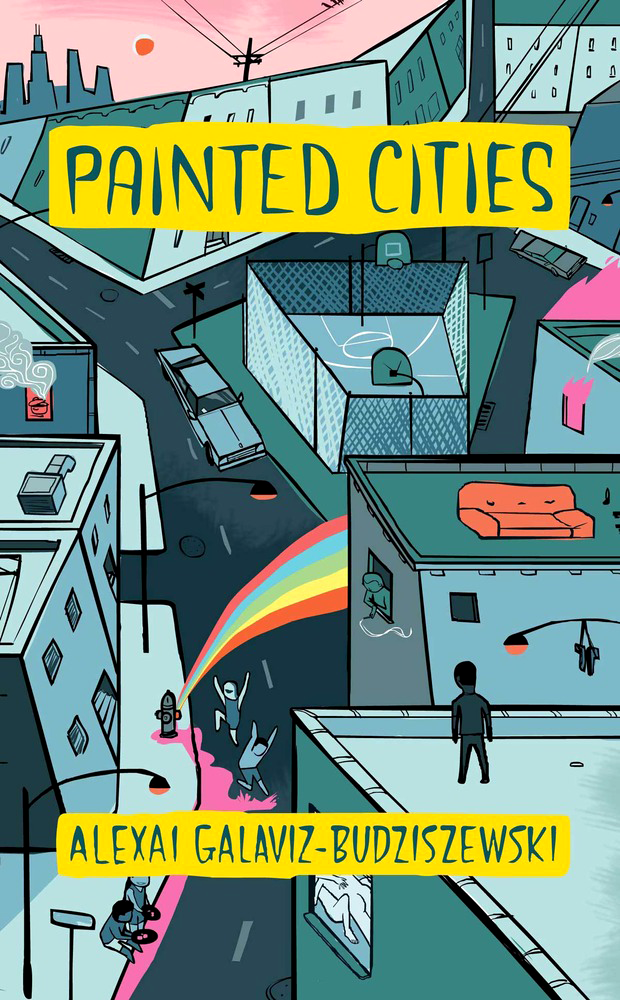 A myth is not the same thing as a story. A myth begins as a story, or many stories, but becomes something else. A myth, however personal, is never wholly one’s own.

And so it is that Painted Cities, a fictional debut based on the author’s childhood, becomes something more than mere autobiography: from this collection of short stories a mythology arises. Its subject is Pilsen and its people. There are guarded, attentive young boys who seem to serve as stand-ins for the author, Alexai Galaviz-Budziszewksi, but then there are also street guitar players, mural artists, husbands who become murderers, and mothers who become martyrs.

The Pilsen this book paints is not a pretty one. It takes only a few pages for the reader to learn that another nickname means another gang. It takes only a few more to understand that the book’s refrain will be the urge to get away—sometimes physically, sometimes in the making, or imagining, of myths. In “Freedom,” the narrator and another boy build a home for themselves on the roof of a pierogi factory; in “God’s Country,” a young boy takes imaginative refuge in a fabled, long-lost Sonoran past; in “Growing Pains,” another boy relishes the smell of airplane exhaust because it means “travel, long-distance travel,” and because it isn’t the same exhaust he smells from the trucks and delivery vans back home. In the penultimate story, “Supernatural,” a polluted canal produces the appearance of a green toxic haze at night, “the perfect ghetto miracle,” attracting devoted crowds. But when the day comes, and “the truth becomes apparent,” there is “an aura of defeat to the crowd.”

Galaviz-Budziszewksi is at his best when he lets us feel what’s behind this urge—when he doesn’t just tell us how everyone attempts to get away, but also tells us why. The strength of his collection hinges on its ability to convey what it’s like to live in this neighborhood, where myths are so preferable to the truth.

His stories are unmistakably set in Pilsen: we hear of 18th Street and 22nd, panaderias and taco joints, the El Milagro tortilla factory and Benito Juarez High School. We hear of fires and concrete and old railway lines. And we smell it all, too—from the fried food to the fumes.

But this does not come as a barrage of details. Painted Cities speaks in plain prose. It is minimal, but not the kind of minimal that’s heady and raw. It is minimal in the sense that it is simple and direct and that it doesn’t want to be anything else, like the pots of frijoles scattered throughout its pages: garlic, onions, lard, and no more. And the stories themselves are like this. They are short and direct. They introduce us to a character, a scene, and then, before long, they end.

What is interesting about this collection is that, like the frijoles, the plainness is part of the point. And so what builds a sense of Pilsen as a particular place also hinders it from fully coming together. Plain prose and brief cuts of life are precisely the modes of expression for conveying the feeling of being stifled in a neighborhood; nothing new seems to happen here.

But they can also leave us, as readers, with the feeling that we are not always being told enough. Such sacrifices on the part of the author may be necessary, but are they worth it?

In the title story, the neighbors who see a certain mural call it “ ‘poignant,’ though many were unsure of what the word meant.” They use it over and over again because they don’t know what else to use. They don’t know what “humility” is, either, though they use that word too. The words are familiar but they don’t feel right, probably because every tragedy is poignant, every apartment humble, and still nothing ever seems to happen.

In “1817 S. May,” the narrator’s uncle, for lack of space, sleeps every night in the family pantry. Yet the uncle himself is almost an afterthought, just another feature of the “crampedness” of the neighborhood. “All these things,” like his parents’ fights, like the fights he could hear from the apartment next door, like the “drunks or dope addicts,” “simply were.” They were not poignant or humble or anything else, beyond mere “crampedness.” They could not be afforded adjectives, or anything beyond the ordinary. Because they were ordinary.

We need, to understand this as readers, the sort of narrators who only give us “crampedness,” or always fall back on the same words. Sometimes this works very well, as when the narrator in “1817 S. May” breaks from recounting how he panned for gold in his childhood to add that “May Street was a place where I saw drunken men brawling to the death, I saw wives get beat by husbands, I saw children get hit by cars and then watched those cars get chased down by neighbors and the drivers get beat into bloody pulps.” At other times this means we hear things through a flat phrase or a cliché, and fail to catch the emotion that should be there. “I felt like we were all in the same boat, like our neighborhood, Pilsen, was just a rut people fell into,” the narrator in “God’s Country” observes.

But what is poignant has no place in ordinary speech; it is the fact that one can routinely suffer and live anyway. The mural in “Painted Cities” is of a ten-year-old girl, “who disappeared the summer before last” (a fact which does not stand out in these stories). Everyone remarks how “she could just sit for hours, contented, smiling to herself occasionally when something funny came to mind.” In the mural, too, she seems content, though tears also run down her cheeks. This is where poignancy takes place.

What we see in the title story, then, cannot last. The fact that a girl can know the affliction around her and hardly betray it, or that a boy can feel the crampedness around him and “squat on the curb and pan for gold,” is, in its own way, beautiful. They take refuge in the imaginary without forgetting the reality. But in order for these brief moments to be beautiful, the surrounding realities must be bleak and bare.

[Never miss another issue. Subscribe today to get the South Side Weekly delivered to your home.]

The painted cities of the title story are found in the tears of the mural’s ten-year-old girl. Within each tear is a city, and the tears somehow fall like tears fall, until we read further on and find that this is only what the “the neighbors say,” that only then do the “painted cities come alive, [and] movement can be seen, the L’s slithering like hobby railroads.” The entire page-long description of the mural, in what is only a three-page story, turns out to be the stuff of the imaginary.

Other moments of myth-making in Painted Cities—mystical spelunkers, that green fluorescent river, a boy who brings dead bodies back to life—are not directly acknowledged as unreal. As moments of unreality they don’t quite seem to fit in with the stories’ hard truths, though there is no clear break between the stories that have mythical moments and those that don’t, or even between the mythical moments and the other moments. Nor is there any one person conjuring these unrealities from behind the scenes. There is no one narrative voice, and such moments seem beyond any one single narrator, anyway.

They only really seem to fit in when read in light of the hint from the title story, that such moments are only what “the neighbors say.” They arise organically, collectively, as myths. And so Painted Cities haltingly, but purposefully, presents a picture of this place.

The hint of what’s behind the myth-making is dropped just one other time: at the end of a story about a man who is shot and then proceeds to walk to a bar, so he can order a beer and get the change to call an ambulance. “No one knew if any of this was true,” the narrator admits near the end. “No one really cared if the stories had been passed down with accuracy or not.” They didn’t care because they were myths.

The Reinvestment Movement After Redlining

City Council has the opportunity to approve the Anjanette Young Ordinance, which would ban no-knock warrants. Does it go far enough?

Is the progressive movement in Chicago seeing a divide?

CPS unceremoniously lays off 443 educators, including those in the arts, dual language, and special education departments

The Reinvestment Movement After Redlining

A System Beyond the Individual

In Beyond the Usual Beating, Andrew S. Baer tries to understand the role that individuals play in the carceral state