On December 31, in response to Freedom of Information Act requests from multiple media outlets, Mayor Rahm Emanuel’s office released approximately three thousand pages of emails relating to the now well-known shooting of Laquan McDonald and subsequent release of the dash-cam video of the event. However, access to this correspondence is not limited to reporters: any member of the public can take a look at what these emails contain. For those inclined to do so, the Weekly has gathered here some of the main characters in the glossary below, along with an annotated excerpt of the emails.

Non-government parties
Jamie Kalven: Journalist and activist, founder of the Invisible Institute. With Craig Futterman, was part of the original team pushing for release of the Laquan McDonald video. Also primary party in Kalven v. Chicago, the successful suit he brought against the City of Chicago that led to release of previous police misconduct records. Brandon Smith cited the suit as one inspiration for his suit against the City of Chicago for the Laquan McDonald video.
Craig Futterman: Faculty at the University of Chicago Law School, founder of the Civil Rights and Police Accountability Project of the Mandel Legal Aid Clinic. With Jamie Kalven, was part of the original team pushing for release of the video.
Brandon Smith: Independent Chicago journalist responsible for suing the city of Chicago, leading to the November 24 release of the video.
Michael Robbins and Jeffrey Neslund: Attorneys for the family of Laquan McDonald. At the behest of both family of Laquan McDonald and legal office of the City of Chicago, they eventually decided not to pursue the public release of the video. The family settled a suit against the city for $5 million dollars.
Mary Mitchell: Chicago Sun-Times reporter and editorial columnist.
Ted Cox: DNAinfo City Hall reporter.

Organizations
IPRA: Independent Police Review Authority, an agency founded in 2007 to investigate cases of alleged misconduct by CPD officers. Multiple organizations, including the Better Government Association, have criticized them for the prolonged length of their investigations and method for determining fault: of the four hundred police shootings IPRA has ever investigated, only one was found to be unjustified.
BGA: Better Government Association, an activist organization centered on Illinois government accountability and general government transparency.
Invisible Institute: Activism and journalism organization based on the South Side. Focused on promoting visibility for the South Side and addressing perceived human rights violations through journalism, law, and public art projects. (The Weekly has collaborated with the Invisible Institute in a number of capacities.)
Task Force on Police Accountability: Announced December 1 from the Mayor’s office, this task force is meant to review the current amount of training and accountability at the CPD. At the helm are four former lawyers with experience in the state of Illinois and a former state police director.

Redactions: The City of Chicago Freedom of Information Act FAQ says “in some instances, private information may be redacted from government records, allowing the records to be released under FOIA.”

✶ ✶ ✶ ✶
Five days before the Laquan McDonald video release, discussion in the Emanuel office focused on likability and putting a positive spin on public perception of the mayor’s office, testing out different ideas like the one explored in the below emails.
Also, notice the time stamps: these emails are presented in reverse chronological order. Read this thread from the bottom up. 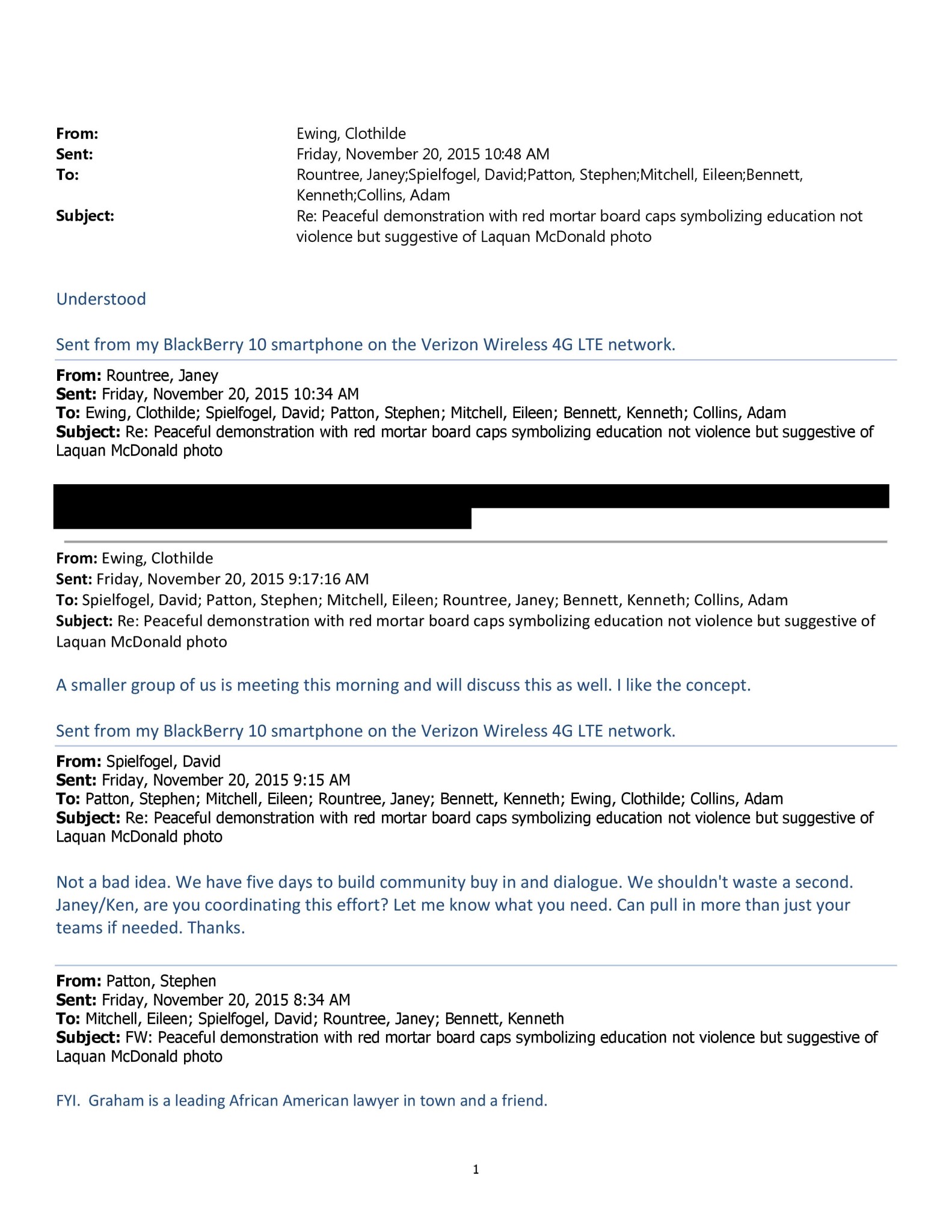 Representatives and advisors for Emanuel often workshopped responses in-email among themselves. It is unclear whether many proposals and ideas ever reached Emanuel himself.

One of the Emanuel administration’s primary concerns, when discussing the release of the video, was widespread panic and unrest. 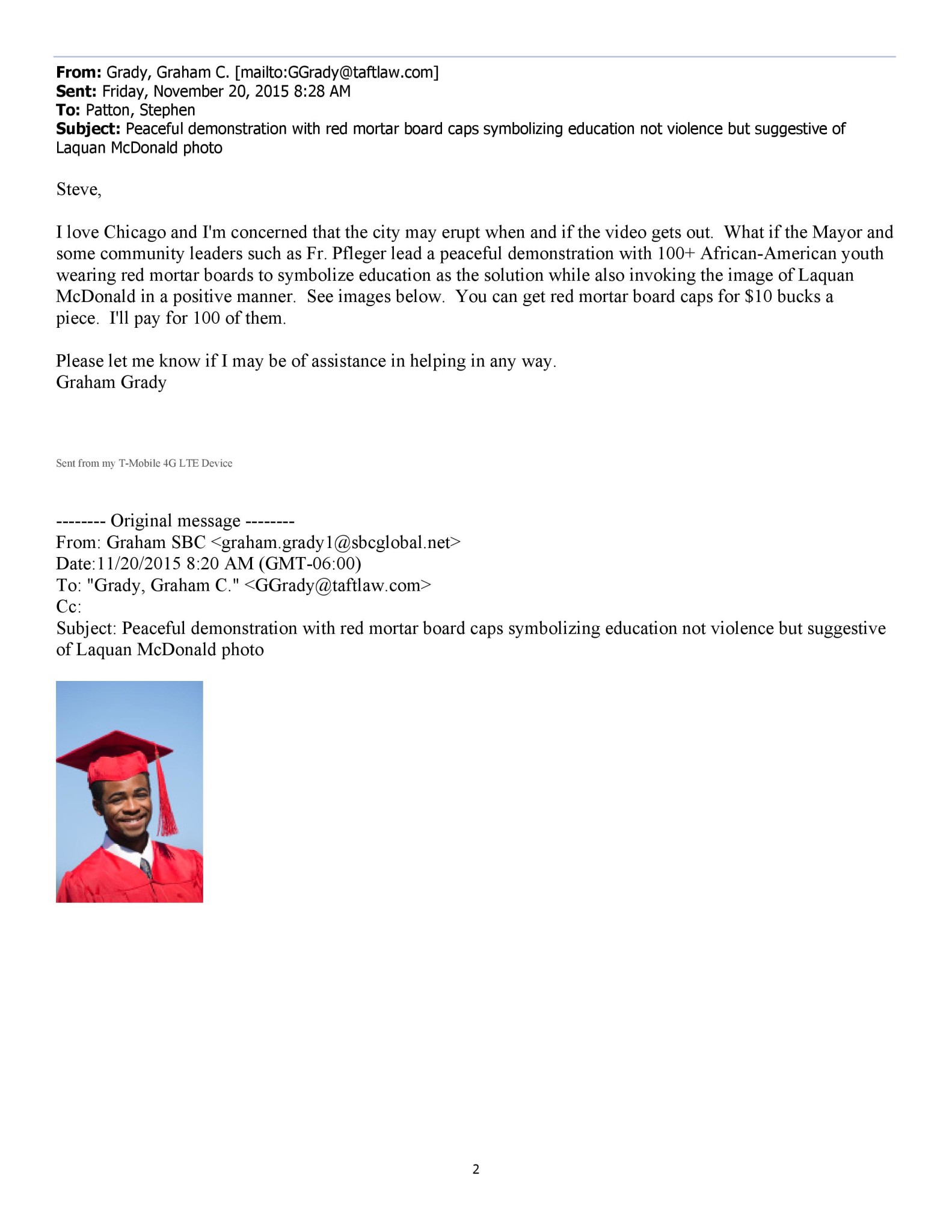 Grady is a preeminent Chicago lawyer, friend of Steve Patton.  He is unaffiliated with the City of Chicago, the Mayor’s Office, and the CPD.

The subject of a demonstration involving red mortar board caps was brought up only minimally after this email conversation.

Chavez Siler, the officer who attacked a student last month, should have been fired for pistol-whipping a suspect in 2017, COPA found

CPD Audits Show Half of Officers Have Complaints

Chavez Siler, the officer who attacked a student last month, should have been fired for pistol-whipping a suspect in 2017, COPA found

CPD Audits Show Half of Officers Have Complaints

Cop in Lakefront Attack Has a History of Similar Incidents