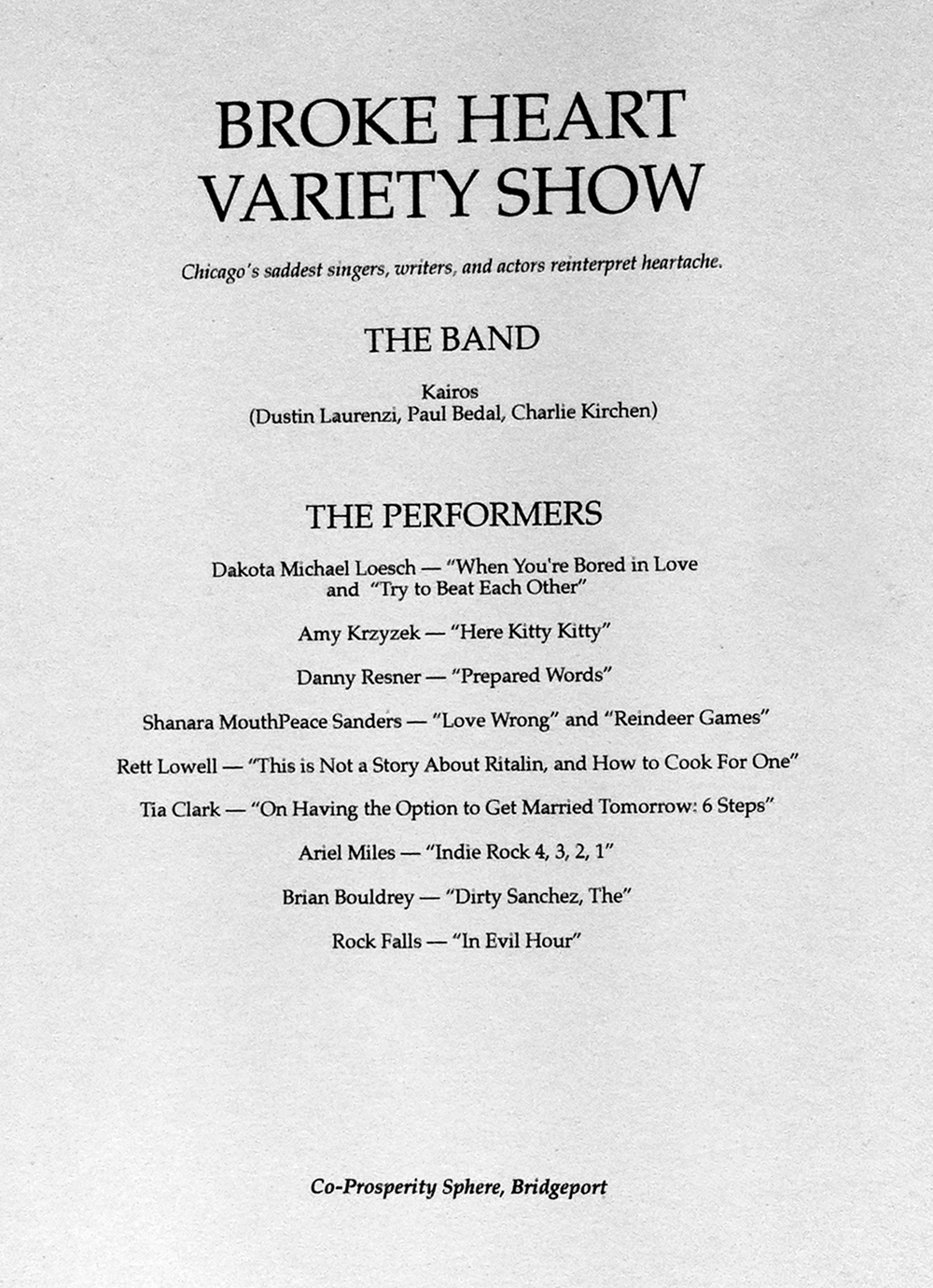 The Co-Prosperity Sphere’s main area, a wide-open space with soaring ceilings, should seem vast, but tonight it feels intimate, filled by a low hum of conversation and the sounds of the three-man band warming up. Suddenly all the lights except those above the band go out, and the bassist’s preparatory strums have turned to music. A woman steps up to the mic and begins to discuss fascination with heartbreak, drawing on the Brontë sisters, Britney Spears, and crying in movies. Welcome to the Broke Heart Variety Show.

This first performance, organizer Tori Telfer’s introduction to the show, sets the stage for the perceptive, clever acts that follow. As Telfer explained afterwards, she wanted the event to feel like an old-fashioned variety show, but more mature and creative. The show, she decided, should make use of brevity and theming in its performances. To that end, the performers, singers, writers, and actors alike, tried to hold themselves to five- or ten-minute pieces about heartbreak, with the in-house band, Kairos, improvising a “live soundtrack” as they heard the pieces for the first time.

Although each performance addressed the theme in some way, they came at it from unexpected angles. Amy Krzyzek’s heart broke over her cat Mr. Quiggles; she began by calling out “Here kitty kitty,” and then discussed her childhood with the dozens of cats that lived on her family’s farm, detailing the lengths she and her sisters went to in order to make their lives more comfortable and explaining how she dealt with the cats’ sometimes gruesome misfortunes. Rather than reading a story, Shanara MouthPeace Sanders fused singing with poetry, holding the audience spellbound with “Reindeer Games” and “Love Wrong.” Danny Resner put a whole new spin on putting words in someone’s mouth by literally putting a small speaker in his mouth. It played a recorded message to an ex. The idea was that Resner had prepared what he would say in their conversation. This setup led to some hilarious moments, such as when the speaker said, “This space has been intentionally left blank for your answer.”

The overall feeling at the Co-Prosperity Sphere was one of community. The evening was comfortable and relaxed, as if everyone there was coming together to enjoy the work of their friends. The performers melted in and out of the audience as the acts came and went; as these performers were unafraid to blur the lines between performer and spectator, many of them mixed tragedy with humor. Rett Lowell’s piece in particular had this mixture of comedy and sadness: it began with a meditation on her fear of old people and ended after she discussed “friend marriage,” three deaths, and a dog so smart that she peed on the paper towels when everyone was out.

“And now you’re going to leave anyway,” Resner said through his speaker at the end of his piece. But though the show may have ended on Saturday night, Telfer mentioned that she would love to make this a regular event. For us, unlike Resner’s character, maybe there will be another chance.

The Neighborhood Is an Image of the City

The Neighborhood Is an Image of the City

The third installment in a five-part history of Bridgeport and Douglas.