When Benyamin Macabee, owner of the only Black-owned art space in Chicago between Hyde Park and the Indiana state line, talks of South Shore, there is a pride in his eyes that doesn’t falter, a steadfastness that mirrors South Shore’s own spirit. “The work I’m doing, the work we’re all doing here, is the work of the universe.” Here, between 67th and 83rd Street, the road to community development is music-, art-, food-, and soul-filled, as evidenced by its unusual smorgasbord of claims to fame: the largest group of Black sailors in the country, a comic book collective called Team Visual X, soulful vegan, vegetarian, Chinese, Mexican joints, a huge public golf course, public and private beaches, weekly jazz concerts and musical jam sessions, are all located in the neighborhood.

South Shore, says Macabee, cannot be talked about without mentioning its past, and by extension its present and future: “It’s always changing, but always staying the same.” In light of South Shore’s cheap lakeside real estate, public murals, and several locally-owned stores, many residents see the ongoing Lakeside Development as a signifier that the rest of the city is starting to notice what the neighborhood’s residents have known and worked for as long as they’ve lived here: that South Shore is a robust hub away from the hubbub of the Loop, with all of the same amenities and for a reasonable price.

But this did not come about and does not continue to exist without its share of tumult. An example, The South Shore Cultural Center, with its large expanse of golf course and looming stucco walls, has a history of racism and exclusion—from its opening in 1905 until 1967, the country-like getaway, and the area as an implicit extension, was whites-only. Yet despite the white flight that ensued post-integration, the Cultural Center’s foundational spirit of escape from city life has stayed with the community even now. And it is the people of South Shore, the individuals who know what it is to rebuild and to replenish, the Chef Saras and Chief Nomos, the Black sailors and comic book artists and community center volunteers that make the neighborhood into what Macabee calls “a cocoon”—getting ready to transform into the best its ever been.

Macabee says, “My art gallery is less about me than it is about me.” This is what he meant with the “work of the universe” that South Shore residents are doing: putting work into the community, into the neighborhood kids, into their art, into their health, into their safety, and not expecting any personal payoff. Highlighted here are places, some weird, some old, some fairly young, doing just that. (Maha Ahmed)

Carl’s Red Hots isn’t about flashy details. It isn’t about a new chef, it isn’t a twelve dollar sandwich, and it isn’t a salad. This is the working man’s food. Since 1955, the fast food joint has provided simple fare—hot dogs, polishs, burgers, tamales, and soda, and it’s exactly what you want out of fast food: cheap, fast, and riding the line between rich and more grease than food. While it’s difficult to go wrong with anything on the menu, the polish, and gyros are particularly good (fries on the side, of course). These are filling and hearty, and don’t leave too much grease on your hands afterwards (“too much” here is defined loosely). Chances are you’ll find yourself next to either a construction worker or parents bringing kids for an after school snack. 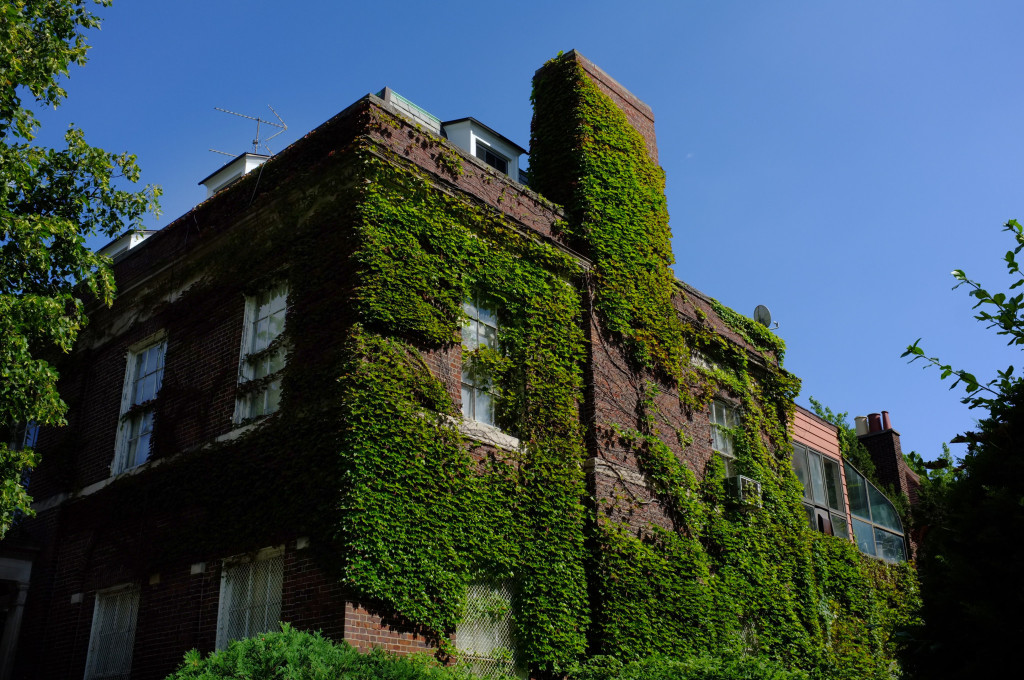 “I don’t like turning my back on my food,” says Sara Phillips, owner of Chef Sara’s Café. Right off of South Shore’s Metra rail stop, on one of the area’s commercial arteries, the café uses the same bright blue awning that holds the signage of every business on the 7200 block of Exchange Avenue. Entirely on hotplates, grills, and Panini makers—no pots, no ovens, microwave status unclear—Phillips and her small but passionate crew cook salmon burgers and veggie paninis from a menu that was solidified barely a month ago.

Opened in 2012, the food offerings of Chef Sara’s have shifted almost daily based off of customer feedback and requests, but one thing has remained the same: Phillips strives to provide the freshest food possible everyday, what she calls an alternative to the many “grease spoons” around the neighborhood. This emphasis on fresh food stems from her 1950s childhood. “As a little girl, my mother put a food pyramid on the refrigerator,” says Phillips. “She told us that if we didn’t make our plates look like that food pyramid, we had to go back and make it look like it.”

Yet unlike most people opening and working at these fresh food coffee joints, who we think of as young first-timers, Phillips opened Chef Sara’s post-retirement, after thirty-two years of traveling around Europe as an airline attendant. But first, Philips went to culinary school at the Art Institute, where she gained the skills to sell the same foods in a one-person delivery and catering service.

“I was selling out of my car, out of my truck,” says Phillips of the time after she retired from the airline industry and before she opened the café. “I realized that the only way to get clients is to go out and knock on people’s doors.”

It is this same sense of direct customer engagement that has carried over to her business model for the café, a philosophy immediately apparent when one enters its tiny premises. I was asked to move from my table beneath the counter to one closer to the window by a staff member so that he could see my reaction to the food: “People will lie when you just ask how the food is, but if I see your face, I’ll know.”

The experience of eating at Chef Sara’s is almost like that of eating at a newly opened café; Phillips herself keeps her eyes glued to every process of food production, the group of younger cooks checks in with her along the way, and chefs clarify with customers sitting at tables from behind the counter about the specifics of their orders. I later learned that this keen control exists because Phillips takes interns from the culinary arts school Le Cordeon Bleu, but also because of her own attachment to her food. “I have to see my product going across the counter,” she says. “I take a lot of pride in my food. People eat with their eyes, I know I eat with my eyes, and I want the plate to look good.”

This almost garish but obviously genuine one-on-one-ness is ultimately what makes Chef Sara’s completely worth the visit. The salmon burger, the muffins, the coffee that comes in several different “flavors” make the trip to this self-described “internet café” worth it, but the charm driven by Phillip’s passion for food and food education has cultivated an atmosphere that owner, community, and customers alike cherish.

Some buildings announce themselves powerfully and brightly, making clear their importance to the community with a commanding exterior. “You can’t miss it” is the phrase often associated with these centers. The Quarry is not this type of place. True to its name, one can only really find The Quarry after a little digging. However, that understated ambience hasn’t stopped wife-husband duo Suzanne and Ernest Armstrong from turning the area into a vibrant cultural center for the South Shore community, offering reliably high-quality entertainment and chances to mingle with neighbors. While Mo Better is the most well-known event, with its virtuoso performers often drawing an audience far beyond South Shore, the venue’s offerings remain varied: a farmer’s market fills the hall on Saturday afternoons, church is held in the same space on Sundays, and even the odd yoga class and community play find their way to The Quarry. Of course, with success like this after only a year in business, The Quarry is well en route to becoming a neighborhood essential, and the Armstrongs’ ambitions for its potential have only grown, with plans to start a rooftop garden over the next year.

Dogs don’t seem to mind walking around naked all the time, but who knows? They may be jealous of the world of human fashion. We’ll probably never know for sure one way or the other, but until then, South Shore resident Lona Reiling thinks puppies should get to express themselves too. Her fashion boutique, which has been open since 2013, caters to fashionistas of both species, with plenty of outfits that allow owners and their pets to match. Human divas will find lots to love in shoes and purses; dogs of all sizes will find the trendiest leashes available. Lily, a rescue Chihuahua who co-owns the store with Lona, is often in-house to barter with customers.

Walking into Chief Nomo’s Oasis is, quite literally, walking into a stockyard of West African furniture, lawn decor, and clothing. A hidden hub of West African cultures on 83rd Street, the building, owned by Chief Nomo himself since 2002, houses three businesses: Angborki Doe Designs (the official source and name of the aforementioned stockyard), a public accounting firm, and an alkaline water and moringa service, in which he provides healing and health services using the super-tree’s various parts. Nomo and his wife had been operating these different businesses out of a downtown office space for anywhere from twenty-five years in the case of the design store, to forty years prior in the case of the accounting firm. The Oasis also serves as a gathering place for much of the West African and Black community in South Shore, hosting events such as Afro-Feast, Afro-centric weddings, and even a seasonal city-run South Shore farmer’s market. A visit to the Oasis also comes with free petting and play with resident store-dog Kenya. Come for the moringa seeds and West African retail, stay for the transliteration of your name in Ashanti Twi, leave with a full heart, fuller mind, and alkaline-filled body.

The Jackson Park Highlands district, located just south of the Jackson Park golf course and bounded by Jeffery Boulevard to the east, Cregier Avenue to the west, and 71st Street to the south, contains some of the most beautiful homes in Chicago. Commissioned at the turn of the century and declared a Historic District in 1989, the neighborhood’s grandiose and stately mansions (some over one hundred years old) lie along tree-lined boulevards, which contain what were considered to be groundbreaking architectural innovations at the time of construction—large front yard setbacks, fifty-foot lot widths, underground utilities, and no alleys. Called home by notable residents as diverse as nuclear scientist Enrico Fermi, the Reverend Jesse Jackson, and musician Bo Diddley, the Jackson Park Highlands is a wonderful district to visit on a sunny afternoon, and for marvelling at gorgeous architecture.