Bishop Dwayne R. Mason is the pastor of Saint Martin’s Church of Christ at 5648 S. State St. in Washington Park. He also works as a licensed funeral director.

Let me tell you a little about Saint Martin’s. We have been on this corner just about fifty years. We started off as a storefront church, but then over the years, starting back in the sixties, we bought a lot of vacant lots next door. And in 1973, we built this church from the ground [up]. So we’ve been in this community fifty years.

I became a pastor to help the people, people that need help. This is an African-American community, and we don’t have the luxury of a lot of counseling—so our people turn to the church for help with everyday problems, spiritual guidance. We have a wide spectrum of parishioners: we have children, teenagers, the middle-aged, and senior citizens. From every age bracket, basically.

I’m now celebrating my fourteenth year here. But there are people in the church that have been at it since… say, a lady came to church yesterday, that used to have an old building across the street. And she remembers when we built it!

There have been a lot of changes since then. In maybe the last four or five years, the face of Washington Park has changed even more, with the things the University is doing. We have the Obama Library coming—you can see the writing [on the wall] with that.

There’s crime and violence in Washington Park. It’s not the safest neighborhood. That’s one of the things we are so desperately in need of, just a transformation. But we are a very viable church, we’re not dead at all. Every year we do back-to-school, we give each of the children in the church book bags and school supplies. We help seniors with different things that they need. We’re not a large church. But we’re a church of a few that accomplishes a lot.  (As told to Christopher Good)

Today, if you stand outside the fieldhouse at Washington Park, you’ll only see featureless brick walls. But in the very near future, the building will be adorned by a new mural, hand-painted by artists at Statesville Prison and members of the Prison + Neighborhood Arts Project (P+NAP) to honor the life of Dr. Margaret Burroughs. Burroughs, a longtime Chicago Park District commissioner and co-founder of the DuSable Museum, also taught at Statesville Prison and Pontiac Prison. For over 25 years, she provided art and education to incarcerated students, who would have otherwise been barred from higher education under legislation like the 1994 Crime Bill Act.

Over the course of July, a community paint day and celebration day were held in Washington Park. During the paint day, participants had the chance to meet with organizers, learn more about the work of Dr. Burroughs, and contribute to the mural. The celebration day featured words from Eric Blackmon, a P+NAP student, and readings from poets Tara Betts, Ciara Miller, M’Reld Green, and Marvin Tate. There were various vendors and booths, including a workshop by teaching artist William Estrada where participants got the chance to practice screenprinting. As of press time, P+NAP is awaiting the approval of a general access permit that will allow them to install the mural on the back wall of the fieldhouse—so make sure to pay Washington Park a visit soon. (Roderick Sawyer) 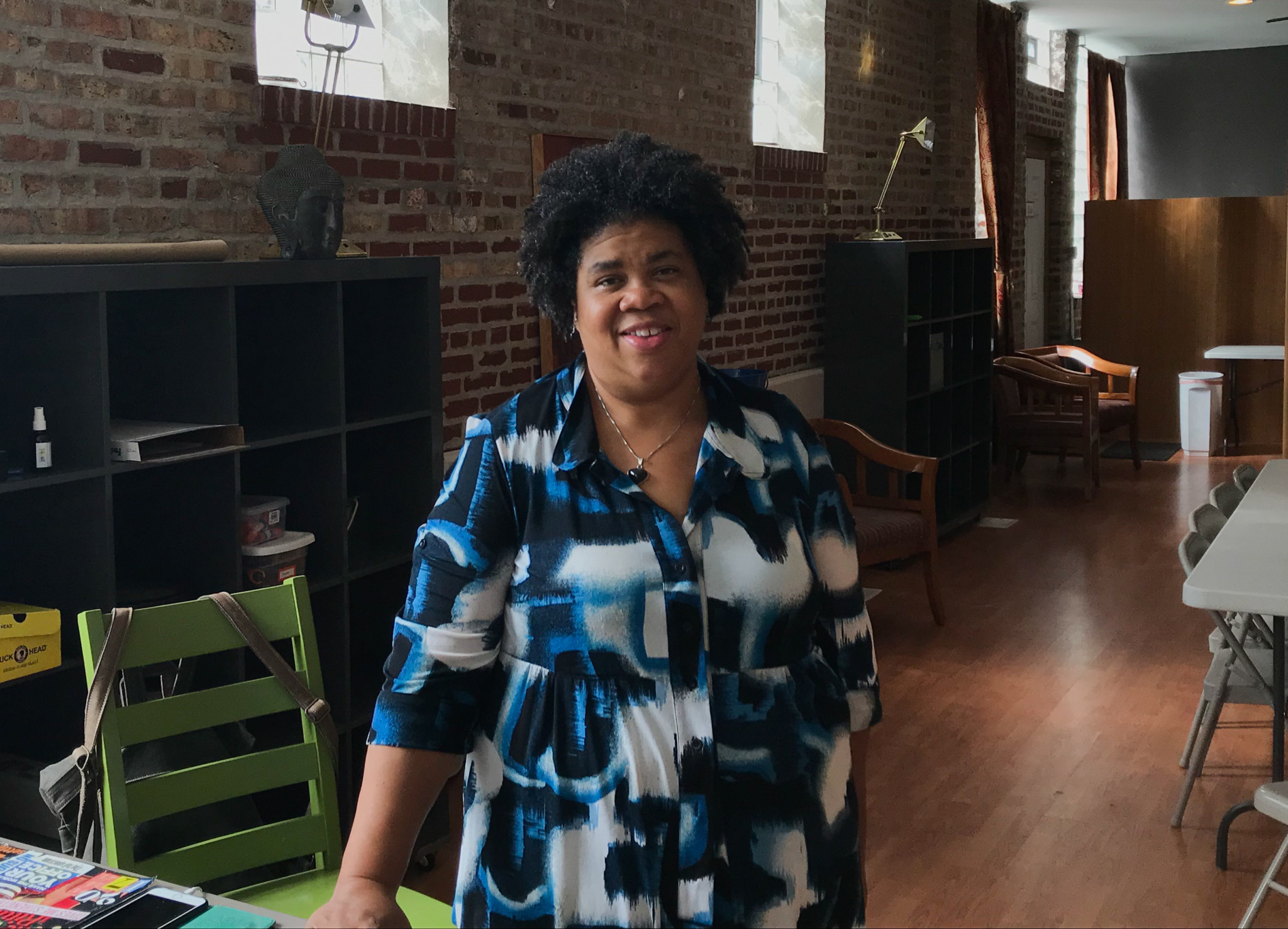 We’re standing outside of her studio, which sits on 57th and State, and admiring the massive mural of Kuan Yin— bodhisattva of mercy—that she commissioned from Annapolis artist Jeff Huntington two years back. For about a decade, she’s lived and worked on this corner, showcasing her work, leading women’s collaging workshops, and inviting passersby to stop inside.

It’s been a long journey to this point. Weathington, who was raised on the city’s West and South Sides, recalls experimenting with art in a course at Mather High School. But it wasn’t until later in life that she began creating again, first with “purely abstract” painting—“because I didn’t think I could draw”—before challenging herself to paint images. Today, she paints, collages, hand-stitches leather wallets, draws, and draws inspiration from just about everything in her life: folklore and religion (we discuss Elegua, the gender-fluid Orisha of crossroads), birds (in particular, those nesting under her back porch), travel (most recently, Paris; next up, Barcelona), and public art around Chicago. Lately, she’s been depicting love through straight-line pen and ink. But after picking up a saw and sandpaper, she now has her sights set on woodworking.

When it comes to teaching and leading workshops, Weathington’s medium of choice is “vision boarding”: a sort of collage-as-mindfulness, where individuals meditate on what they want from their future as they cut and paste. “When people collage, they resist at first,” she says, whether from fear of vulnerability or imperfection. But Weathington, who was never formally trained, has her own way to move past these doubts.“The key for me is that I don’t judge my art,” she says. “I judge whether I love it or I like it, and whether it’s finished. But I am not concerned with whether other people like it or not.”

As Weathington recognizes, there are a lot of challenges in Washington Park: disinvestment, crime, its status as a food desert. But in her time on 57th and State, she’s seen things get brighter: from the mundane (working with the liquor store across the street to get garbage picked up), to the beauty her gallery contributes. Weathington says she often learns that visitors to her studio have been artists in the past, or are still artists. “They may have other things pulling them away from it now,” she says, “but they’re really excited to see art in the community.”

And so, as she puts it: “I think they accept me as an artist here. They always say, when are you going to open the doors again? They accept me as the little odd women who paints on the first floor over here.” (Christopher Good)

Inside this unassuming storefront on Cottage Grove, across from the Oak Woods Cemetery, lies some of the best—and best-named—burgers in the city. The half-pound made-to-order cheeseburger, replete with onions and sweet pickles, is one of the best I’ve had in the city: juicy, tender, flavorful, and filling, it more than fulfills its name. And about that: per owner Mike Johnson, who has run the joint for two years, the store is named after both his late cousin Wesley and his mother, who taught him how to make burgers. Consider this is a sincere and heartfelt thank-you to Wesley, Mike, and Mike’s momma. (Sam Stecklow)

Longtime Woodlawn-based artist and gardener William Hill is not interested in the “politics of ownership.” It’s grassroots partnership, not ownership, he says, that benefits the surrounding community. In his newest garden project, Hill is relying on such partnerships—with the Sunshine Gospel Ministries, nearby schools, and neighbors—to transform the grounds into a gathering space, and a center of education, horticulture, food equity, and art. In the garden, which occupies a CPS-owned lot just south of Hyde Park High School, Hill plans to run engagement programs for ex-offenders and for kids with unreliable food access. But the space will also serve as a “corridor gateway,” open to the public as a place to walk, to sit, to talk, to play. “We always need gardens,” Hill says. “There are never enough.”

The garden is already built out with floral and vegetable beds, chess tables, benches, sculptures, and a path winding around it all. There will be opportunities to see it, and to hear Hill discuss it, throughout September and October, as part of an art installation on the points of intersection between natural and social worlds. The installation is another point of partnership: it’s put on jointly by Hill and the nearby Experimental Station. (Emeline Posner)

Food journalism might not have the hardest rep: you show up, you eat, you write something. But what good are words when it comes to discussing a plate of fries? Case in point: the challenges of doing justice to the hand-cut potatoes over at Friistyle, which opened in July at the former site of the Bronzeville Jerk Shack, just steps from the 51st Green Line station. The signature dish is the “bomb frite,” a heap of fries served in a paper cone, plus two toppings of your choice. But it’s the eclectic rotation of in-house sauces and toppings—previous selections include lamb, jerk salmon, and tikka masala—that pushes Friistyle from fry to pomme frite status.

On my first visit, I opt for the wing frites. The barbeque “boughetto” sauce these wings are glazed with—i.e. bougie meets ghetto—cuts to the heart of Friistyle’s appeal. It’s gourmet food you’d actually crave when hungry; impossibly enough, fries you might impress a foodie date with. So step inside, take in the decor—to the left, the restaurant’s name cast in neon cursive; to the right, a mural by Paul Branton with the Green Line and a mysterious eight-ball moon—and order up. Friistyle’s ever-expanding Yelp fanbase can’t be wrong. (Christopher Good)