Muscles stiff, face hidden in the shadows, a man turns around to realize that his father is pointing a gun at him. This is the opening scene of eta Creative Arts Foundation’s production of Sins of the Father, a play about secrets, confessions, and clemency among three generations of men. To his father, this man is a stranger, buried in the darkness along with the family’s untouchable history.

The story revolves around three generations of African-American men who struggle to confess and redeem their past wrongdoings. Caleb Hamilton, a world-renowned blues musician, returns home after nine years of estrangement from his only son Joshua and his aged father George. It turns out that he has sought reconciliation only as death looms on the horizon––Caleb has just been diagnosed with leukemia. This realization forces the three men to gradually break down the barriers between them and confront the secrets of their past. 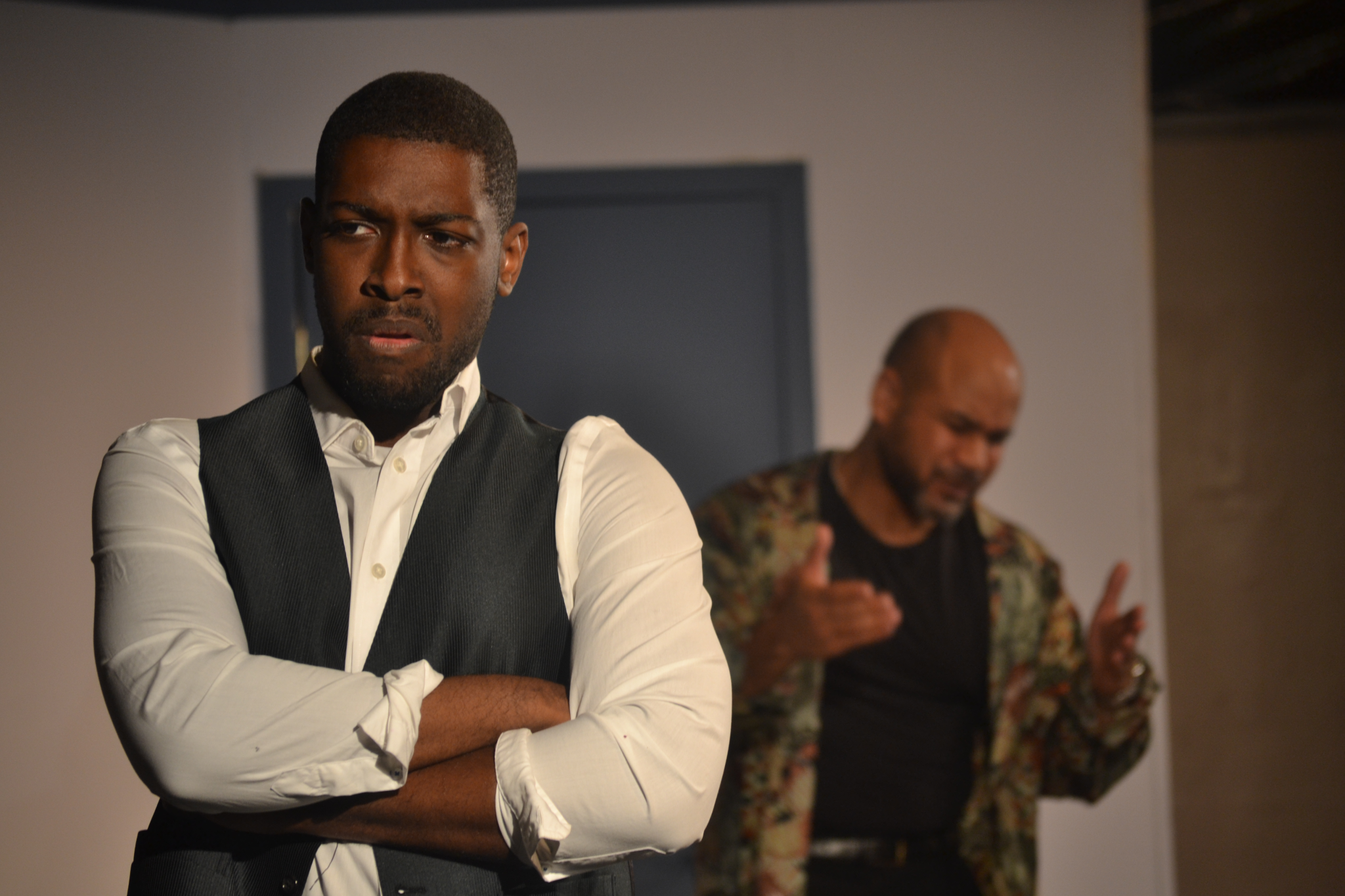 “Like lies, secrets are just coverings for what really happened,” writes playwright Synthia Williams in her letter to the audience. “We wrap the truth in darkness and believe it will just disappear, but it never does.” As the son steps into the spotlight, each character takes on his own burden of revelation: for George, it means confessing the cause of Caleb’s mother’s suicide and his true relationship to Caleb; for Caleb, it means admitting his failure as a father and taking responsibility for his negligent past; for Joshua, the youngest, it means learning to think critically about his upcoming marriage so that he will not repeat his father’s mistakes.

At the heart of the play lies the idea of parenthood. Mistakes made by parents, if never acknowledged, echo into their children’s futures. “God punishes the children for the sins of the father,” George says, for he knows that he is the first to have sinned. Had George and Caleb never repented for their sins, whose roots can be traced back to problematic relationships with their wives, young Joshua might have fallen into a similar life path, stranded in an unhappy marriage, and the cycle of sins would have continued.

Women, although absent from the play, are essentially what tie the men together. Synthia Williams highlights the idea that romantic struggles can foster camaraderie among men in a scene where George, Caleb, and T-Bone, an old friend of George, sit and drink together, each recounting his own romantic history. As they exchange stories, they empathize with one another, understanding that in the face of love, each has become Cupid’s captive. In sharing this powerless position they gain trust from one another. Through the male-exclusive environment, Williams is able to glimpse into men’s unique ways of building friendship and communicating emotions.

Williams’s dialogue is filled with wry humor and sculpts the stolid, masculine protagonists, especially the old father, George. He is stiff and bilious, yet underneath his hardened shell is the heart of an earnest father and caring husband. The play keenly observes a common demand of masculinity: men should never display their emotions. Each exchange of feelings becomes a tug of war; each character shields his vulnerabilities with hard liquor, curses, and jokes about women. Yet often within lighthearted discourse, a line will suddenly fracture a character’s fortress and call forth stirring revelations of the past.

At times, the play’s devotion to a particular portrait of masculinity can be costly. When a character interrupts a heartfelt conversation with a joke before the emotional climax, Williams’s story briefly loses its power. Humor within a grim story of murder, sins, and redemption requires cautious handling; when introduced too early, the characters appear somewhat indifferent toward their own suffering. Though such callousness may simply be intended to reinforce this problematic image of masculinity, the humor reduces the emotional weight of the men’s secrets and alienates the audience.

However, Sins of the Father by no means lacks moments of brilliance. Williams’s use of silence to interrupt violent confrontation brings the dramatic tension to the brink. Another gripping moment occurs when, at the finale, with all conflict resolved and a happy ending seeming to draw close, tragedy befalls the family, dramatically changing the previously comic tone of the story. The play toes the fine line between drama and reality, and in the process is able to reveal the uncomfortable truth that fate often catches us off guard.

The challenges of the family in Sins of the Father mirror those that eta faces at the moment––the challenge of bridging the gap between the old and the young. Sins of the Father is eta’s second production after a full year of renovation. Theater construction will not be completed until January; currently all productions are being staged in the gallery space, which was eta’s original stage in the seventies.

In the seventies, eta was founded to provide an alternative stage for the African-American community when opportunities for them in mainstream theater were limited. As more opportunities become available, the demands of the new generation have evolved from those of the past. Facing these new demands, eta strives to maintain its social relevance and readjust its role in the community. “We are at a stage where we are trying to introduce younger voices into our leadership and guide them to make independent decisions,” said Mark Durham, chairman of the eta Board of Directors. He believes that eta, like young Joshua in Sins of the Father, is taking its first step into adulthood.
eta Creative Arts Foundation, 7558 S. Chicago Ave. September 18–October 25. Friday–Saturday, 8pm; Sunday, 3pm. $30; $25 for seniors, $15 for students. (773) 752-3955. etacreativearts.org