When Anne Keough, the branch manager at Blackstone Library, looked in the cabinets behind her desk during recent renovations, she didn’t expect to find a treasure trove of historic documents. Blackstone Library opened in Kenwood in 1904 as the first branch of the Chicago Public Library system. In Keough’s office sat volumes of Shakespeare from the late 1800s, old copies of the Hyde Park Herald, and decades-old library policies. Weekly editor Rod Sawyer spoke with Keough about her discoveries, the history of the Chicago Public Library System, and the importance of time capsules.

When we reopened, I told the workers who were putting the furniture back that I wanted my desk not in the southeast corner of my office but the northeast corner of my office. And that left a couple of cabinets open, and I was wondering what was in those cabinets all these years. And when I opened the cabinets I found all of this material that we have in front of us here. This large two-volume set of works by Shakespeare, given the binding obviously [is from] sometime in the 1800s, but we have been unable to find the year. And also they have Shakespeare misspelled. They spell it S-H-A-K-S-P-E-R-E and it should be S-H-A-K-E-S-P-E-A-R-E. But, I digress.

There were some press binders and loose paperwork from library policies of years past. I’m looking at one here that’s from August of 1971 [on] the handling of fines under extenuating circumstances. Some things from National Library Week in 1997. Some pamphlet on the fifty-year anniversary of what is now the Cultural Center. That was October 9 of 1947.

Can you tell us a little bit about the Cultural Center and its history?

The Cultural Center was the original main library for the Chicago Public Library. And once upon a time it was the only Chicago Public Library facility in the city. It opened on October 9, 1897. [Then-mayor] Carter Harrison Jr., he was [quoting from the fiftieth anniversary pamphlet] “unavoidably absent but an impressive oration was given by Emil G. Hirsch, former president and a member of the library board during the whole construction period. The corner stone was laid for it on Thanksgiving Day, November 30th, 1893, when Dr. Hirsch, then president of the board likewise delivered the principal address.” The original public library had been an old water tank in 1873, so this building was built to house it and it had all those beautiful old mosaics and quotes about the importance of reading and names of famous artists or writers of centuries past.

Well, some of my former coworkers in literature and language say that was a gradual process, but it happened in 1991 when the library finally moved the last few of its departments from what is now the Cultural Center to the Harold Washington Library Center in the South Loop. That was when the Department of Cultural Affairs came into full ownership of the Cultural Center.

So is Blackstone the oldest library preceding the Cultural Center?

Listen to a longer version of this interview with Anne Keough on the November 28 episode of SSW Radio, the Weekly’s radio hour on WHPK:

Let’s talk about some more of the contents in this box. What’s in the box and what’s probably the oldest document in here? 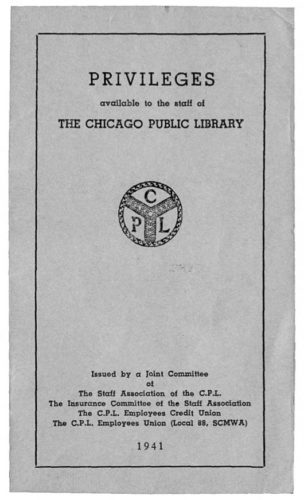 The oldest document in here appears to be a set of clippings, newspaper clippings, from Chicago newspapers on the dedication of the main library on October 9, 1897. Along with illustrations, okay, I opened a page and the first thing is from the Chicago Daily Tribune, dated September 11, 1897, so that was the month before the library opened. And it had librarian Frederick H. Hild, a sketch of the new main building, and then an article: “Chicago library soon to be opened, gem of art fitted with every known convenience and ready for inspection in four days next week, will be dedicated on October 9. Cost: 2 million.” Of course it would cost multiple times that these days.

January 8, 1904. That was when Isabelle Farnsworth Norton Blackstone handed over the keys. There are several newspapers, a few of which are no longer in use, about the main library opening….The Saturday Evening Herald had a picture and an article on the Timothy Blackstone Library dated January 2, 1904. “It is to be formally dedicated at 2 o’clock this afternoon…at 3 o’clock it will be open to the public.” Well that was pushed back a week, it was actually handed over on the eighth and it opened to the public on January 11. She had it built as a memorial to her husband, and the article takes note of that.

This one is titled Privileges and it’s a much shorter smaller pamphlet. Elsewhere in this box we had, let’s see… This book, titled Early Social Life in Chicago by Sarah Seymour Blair, it’s a 1916 book but it’s actually holding together in quite good shape. I’m thinking special collections might be interested in that.

Here’s a section that dates itself: restricted books. “Certain books, because of their nature or content, are reserved for restricted circulation. These books are issued to adults only, not to young adults, upon the approval of the person in charge of the agency. Such books will, in most cases, be sent on short loan but only when the request bears the initials and approval of the branch librarian”—what we would now call the branch manager—“where the request was filled. When it seems advisable, restricted books are wrapped when sent through interagency delivery. Books on sex education for children are issued only to parents.” So, that’s an interesting page to turn to there. The library has loosened up its restrictions a bit since then.

What’s your favorite document in this collection?

It’s going to be either these newspaper clippings of the dedication of the big library on October 9, 1897, or the newspaper clippings about the opening of Blackstone Branch Library. These were the first two facilities of the Chicago Public Library, and it’s just amazing to be holding these better than hundred year old newspaper clippings and documents and to look at this picture of the rotunda and say, “Yeah, that’s my branch when it was brand new,” that’s really quite something, to be just holding this in my hands. And the other things that I like are the, the staff manuals that explain library policy to staff because there’s something about the antiquated language that I kind of like.

This one staff manual from—God, what is it—1962, 1963, explains about what’s expected of staff in a manner that these days could be seen as quite prissy, but back then was expected. “The success which the library enjoys in developing its program of service and carrying out its policy and objectives is dependent upon its staff. In accepting an appointment to a library position, each staff member becomes, in that position, an official representative of the library. The entire library organization may at times be judged by the work and manner of a single staff member, or by what that staff member says or implies.”

I like that phraseology because that’s still true. It may or may not be repeated in quite the same way, but that is still true that people see all the library staff as being representative by one person. That means we all have immense power, we can either have the library seen as great or as terrible just based on our interactions with people. So I’m glad the early-1960s staff manual mentioned that. 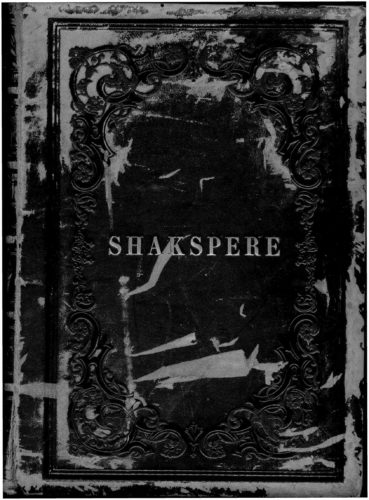 In front of us we have two gigantic volumes of Shakespeare. What would you guess would be the date of these?

I’m guessing the date of these would probably be around 1890, 1891. Possibly the late 1880s. They’re eleven- by seventeen-inch books. The funny thing is I’ve seen some of the illustrations in this book, and I recognize them as illustrations that had in fact been on sale in a college bookstore when I was in college. I may have even had one or two of them, and I was always wondering where they came from. Well, now I know. Beautiful nineteenth-century woodcut illustrations. The duel from Twelfth Night. Audrey, that’s from As You Like It. Queen Isabella and her ladies, I had that illustration once. I got rid of it because she was brooding. It’s done in the original language. I mean it’s not one of these books where they have the more modern translation on one side.

And the problem is, we see no name on these books so we don’t know who owned these. I don’t know if these belonged to Mrs. Blackstone.

What’s the importance of keeping these relics?

The importance of keeping these relics is because they’re both local history and they’re Chicago Public Library history. They serve as markers of how far we’ve come as a society, just from the language we used in the local paper to the instructions for staff and how to do their jobs in decades past. What I found in my office cabinets that have been blocked by this desk for years is a time capsule, no less than the time capsule that was planted out there in front in 2004, the anniversary, the centennial anniversary year. This has also been a time capsule into, you know, what the library had and what the library was about and how the library operated.

No Use in Keeping It a Secret

An oral history from the exhibit
“I’m Still Surviving: A Living Women’s History of HIV/AIDS”

Struck from the Record

The Trial of the Chicago 7 fictionalizes the stories of its participants. In the case of Bobby Seale, the inaccuracies tell a larger story.

In "The Trial of the Chicago 7", two key characters embody the Left’s ongoing inner conflict

On Strike with Chicagoland Mechanics

Hundreds walked off the job on August 2, and they’re still on the picket line

No Use in Keeping It a Secret

An oral history from the exhibit
“I’m Still Surviving: A Living Women’s History of HIV/AIDS”

Struck from the Record

The Trial of the Chicago 7 fictionalizes the stories of its participants. In the case of Bobby Seale, the inaccuracies tell a larger story.

In "The Trial of the Chicago 7", two key characters embody the Left’s ongoing inner conflict