The Goldilocks of American Chinatowns, Chicago’s Chinatown is not the biggest in the country, nor is it the smallest. Here, new and old blend together—old village dialects aren’t heard quite as frequently as Cantonese and Mandarin, but survive nonetheless. Historic buildings like the Pui Tak center stand shoulder to shoulder with new restaurants and bustling souvenir stores.

Most of the commercial activity in Chinatown is concentrated on two main streets, Cermak and Wentworth. Within a few close blocks are bookstores, banks, tutoring centers, bakeries, restaurants, and a number of other services that cater to Chicago’s Chinese population. Although Chinatown is a popular stop for visitors hoping to grab some bubble tea or dim sum, the neighborhood is three-quarters first-generation Asian-American immigrants and seniors. Much of it consists of quiet, residential streets where generations of Chinese families have made their homes and livelihoods. “We’re a tight-knit community; people know each other,” says Bernarda (Bernie) Wong, president and co-founder of the Chinese American Service League, and an influential figure in Chicago’s Chinese community. “There are generations of families who have grown up here. When there is any problem or emergency, like the China earthquake [a few years ago], all it takes is a phone call and the community leadership comes together.”

Chinatown’s diversity in language, food, schools, and civic engagement is attracting a growing number of visitors and new residents. In the last fifteen years, the neighborhood’s population has grown almost fifteen percent, according to U.S. Census data. “We have a new library, a new boathouse, a new field house, a dragon boat festival, and so much more,” says Wong. “Chinatown is very much alive.”

Just visible off of Wentworth, the Heritage Museum of Asian Art offers an experience unlike those provided by the Art Institute and the Museum of Contemporary Art. Here, there are no spacious galleries with works placed sparingly along the walls. Instead, the museum houses rows of glass display cases, each brimming with unique artifacts, some dating from as far back as the Neolithic Age. In many respects, this museum is a shrine to the minute and intricate, featuring a variety of small art including delicately carved pocket-size snuff bottles from the Qing Dynasty and a remarkable assortment of netsuke, Japanese miniature sculptures originally worn with kimonos and other traditional garments. Even the collection’s paintings and vases display miniscule, controlled brushwork, offering a beauty best appreciated from up close. Most impressive, though, is the staff’s dedication to sharing their knowledge with visitors. As founder Jeffrey Moy put it, the museum was created “to help bring Chinese culture back to the Chinatown community.” The museum will move to a new, larger location down the street next year, where it will undoubtedly continue to put dizzying intricacy on display.

Best Depiction of Mao Zedong in the West

With the motto “WE SERVE PEOPLE” emblazoned on the restaurant’s walls, the eccentric Chairman Mao theme of this Chinatown restaurant is nothing if not thorough. The menu boasts offerings such as “Chairman Mao’s Favorite Pork Belly,” and portraits of the famous leader and other influential Hunan figures line the walls. The theme doesn’t stop with the decor or the menu, as friendly waiters in Red Guard uniforms serve authentic northern Chinese cuisine described by TimeOut Chicago as, “intense, spicy, oily and delicious.”
“Chef Tony,” as he is called by those familiar with Chinatown’s many “Lao” restaurants, has built something of an empire in the Chicago Chinese restaurant industry. His Hunanese contribution is perhaps the crown jewel of his many restaurants—cheap, fast, and delicious.

Every meal at Lao Hunan starts with a hot cup of green tea. The palate-cleansing tea comes in handy when sampling any of the dishes, most of which are heaped with crunchy red chili peppers. Popular menu items include the Dry Chili String Beans Hunan Style, Crispy Eggplant, and Jade Tofu, all prepared simply with chili oil, fresh ingredients, and a spicy kick. With dozens of veggie and meat options, Lao Hunan is the perfect spot for vegetarians and carnivores alike looking to try some “real Hunan food,” as it’s described by many of its patrons. Though the bright red awning reads, “Chef Bao’s Chinese Restaurant,” don’t be fooled. Even under new management, Lao Hunan’s spicy specialties haven’t gone anywhere.

Thirty-seven years ago, Bernie Wong and nine of her friends sat down for a potluck dinner to talk about the needs of their Chinatown community. They set out with one goal: teach English as a second language to Chinese immigrants. A couple of decades later, English classes are just one of the dozens of services the Chinese American Service League (CASL) and its staff of 450 provide to over 17,000 clients.

CASL is a hub in the Chinatown community. “And not just Chinatown,” adds Wong. “People come from further north than the loop and from as far south as the University of Chicago to [connect] with this community. We are a connector of families and resources.”

CASL has five main divisions: child education and development, elderly services, employment and training, family and community services, and housing and financial education. “We started as a mom and pop shop, trying to solve problems,” recounts Wong. “We saw that needs were great, so we expanded from English classes to counseling, then just kept adding programs. Back then, the Chinese community had no social services, no benefits. Now we help them help themselves.”

CASL sees their community members through all phases of their lives, with adolescent education and senior services as two of the league’s

largest divisions. “A lot of times, former clients are the people who join our staff,” says Wong. “We want them to feel like this is their community. Many of the people on our executive council used to be in our daycare when they were kids.”

While providing a place to learn useful skills like culinary arts, English, and personal finance, CASL also focuses on providing Chicago’s Chinese and Chinese-American populations with opportunities for cultural retention—the seniors teach each other dance, kung fu, and art, and also organize trips together to places like Yellowstone and Montreal. “We’re sort of a self-help group,” explains Wong. “All of our services are connected.” This dedication to her community is apparent even in the decor of Wong’s office. Her walls and desk are lined with pieces of artwork CASL’s clients have gifted to her, and dozens of trophies and certificates crowd the walls and shelves. In the corner of Wong’s office hangs a banner, dedicated to her by a client, that reads: “In appreciation of her devotion to the wellbeing of my family and the Chinese community.”

As I stepped outside to leave CASL after my interview with Wong, we encountered a busload of elderly Chinese men and women departing the center. Wong greeted many of them by name and stopped to chat with a staff member helping people board the bus. “This is my home, these people are my family,” the staff member said, smiling. The work CASL does provides a space for thousands of Chicagoans to feel the same way. 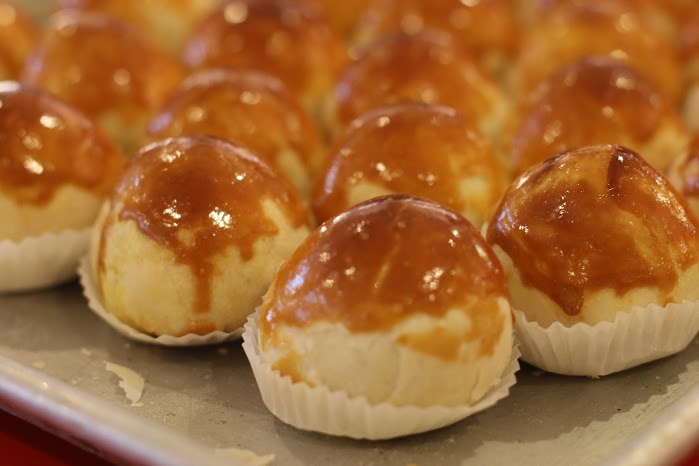 Being in Saint Anna’s Bakery feels like being in your Chinese aunt’s kitchen, if your Chinese aunt’s kitchen was filled with hungry customers crowding around glass cases filled with a broad selection of sweet and savory Asian and Western desserts. Serving everything from egg tarts to chocolate mousse cakes to mochi, the pastry chefs speak to each other in rapid Chinese while quickly grabbing sweets from behind the display case with tongs and piling lunchroom-style trays high with arrays of buns and rolls. Most of the buns, rolls, and tarts are less than a dollar (which is a plus, because the bakery is cash only).

The egg tart is Saint Anna’s specialty. For eighty cents, you get a sweet, pale yellow custard that’s definitively but not overpoweringly eggy, firmly encased in a delicious crumbly, oval-shaped, shortbread crust. Don’t forget to ask for a couple more egg tarts—after all, they’re only eighty cents. Then try the jin deui (also eighty cents) which are hollow, deep-fried sesame balls with rich and sweet red bean paste at their centers. Don’t leave without sampling the bakery’s pineapple custard bun, which doesn’t contain any pineapple at all. The name actually describes the crunchy topping on the buns, which resembles a pineapple’s rough exterior. Inside, there’s a thick, satisfyingly sweet coconut custard that will leave your stomach satisfied and your pockets even more so.

If being a kid in a candy store is fun, being an adult in a candy store is even better, especially if th at candy store is Chinatown’s Aji Ichiban, an international chain originating in Hong Kong, with only one location in the Midwest. In addition to carrying Western sweets, Aji Ichiban also stocks popular Chinese favorites, like Pocky, hot dog and hamburger shaped gummy candies, Yan Yan, and green tea Kit Kats.

It’s possible to spend hours perusing the overflowing Lucite bins, filled with bright, individually wrapped candies in flavors like…well it’s hard to be sure, as most of the candies aren’t labeled with any flavors. However, with depictions of fruit, cute cartoon characters, and bright colors on the crinkly wrappers, there’s no harm in judging the sweets by their pastel-colored covers. And unlike most candy stores, at Aji Ichiban you can buy pieces of candy individually, so there’s every incentive to experiment a bit and take a sweet of every color to the checkout. Additionally, the store is packed with clear bins of dried fruit, which you can sample before purchasing. From dried plums to dried mangoes to dried strawberries, the variety covers an entire wall. There are also more non-Western offerings, like mushrooms, spicy dried fish, chili olives, fried and shredded squid, and vacuum-fried green beans. In the fridge, you can find Japanese fizzy drinks, canned milk tea, and all the typical American sodas next to bins of cooked duck necks and other delicacies.

Latest from Best of the South Side 2015