The Hyde Park and Kenwood neighborhoods are much more than a pit stop for architectural tours of Chicago.  Frank Lloyd Wright enthusiasts get a special kick in witnessing not one, but two of the architect’s most acclaimed works located within just six blocks of one another: the Robie House and the Isidore H. Heller House. As classic examples of Wright’s Prairie School style—a design intended to evoke prairie surroundings and meld with the Midwestern landscape—the cultural significance of these two homes speaks for itself, without any tour guide explanations.

As travelers hop between President Obama’s and Muhammad Ali’s respective Kenwood mansions, yet another two  homes also designed by Wright pass in and out of view, unnoticed. The Warren McArthur and George Blossom houses, each designed in 1892, lack the architect’s distinctive strokes for residential exteriors. A jaundice-yellow paint coat, a decaying front porch; from the road the Blossom House looks far past its bloom. Instead of geometric outlays, flat roves, and horizontal features, the outside façades are marked most notably by their deteriorating condition in an otherwise well-kept row of homes.

Privately owned for over sixty years, the Blossom and McArthur houses had fallen into the background of Kenwood’s architectural and historical identity. But a recent bid to restore and convert the properties into a bed and breakfast by Jennifer Pritzker’s Tawani Enterprises, and the community strife that has ensued, have helped rebrand the properties as landmarks for the community.

“I think [the houses] are almost invisible,” said Chuck Thurrow, who has lived just three houses north of the McArthur House for the past fifteen years. The former head of the Chicago Landmark Commission, Thurrow was an early player in engaging neighbors about the proposal, hosting an informational meeting back in August of 2013.

“When I went around door to door inviting people to my meeting it was really quite startling the number of people who didn’t even know they were Frank Lloyd Wright’s. Probably about half the people I talked to. They have been just kind of sitting there.”

Initially, Thurrow recalled, immediate neighbors were skeptical of the feasibility of the bed and breakfast initiative, but largely optimistic that the buyers could fund the costly renovations required of each property.

The McArthur and Blossom houses have been in the  hands of two families since 1954 and 1956 respectively. The owners are Ruth Michael and Alice Baum, each of whom were prominent female Chicago artists in their day. In their old age they decided to move out of the rundown homes. Their children, Charlie Baum and Louisa McPharlin, who both grew up in the properties, are handling the affairs of the sales. For McPharlin, who serves as the broker for both properties, Lloyd Wright transcends the walls of her childhood home. 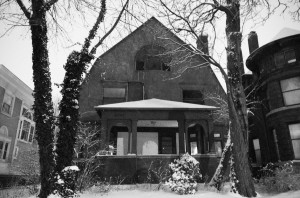 “I, personally, developed a lifelong passion for buildings and one of my life changing moments at seventeen was doing the makeup for Frank Lloyd Wright, Carl Sandburg and Alistair Cooke for their television meeting on Channel 11 which in its early days was located in the Museum of Science and Industry and where I had an after high school job on the stage crew,” said McPharlin in a community-circulated email. “When I told Mr. Wright that I lived in one of his houses he asked which one and, when I told him, he asked how I liked the sideboard in the dining room.”

The email, postmarked December 10, conveyed McPharlin’s dismay with the outcome of a spirited community meeting that had been held three weeks prior, a meeting that marked a shift in the reception of the bed and breakfast proposal. On November 18 in St. Paul and the Redeemer Church, Hyde Park and Kenwood community members gathered with 4th Ward Alderman Will Burns to discuss the Tawani proposal that would convert the architectural sites into a commercial enteprise. Something of a neighborhood knock-out unfurled.

“The woman who made the opening remarks, she made a statement that there’s going to be a zoning change over her dead body, and she’s been living in the neighborhood for sixty years. And she knew the mayor and she would get the mayor to go down on everyone if this went through. So that was the kick-off kind of mood,” said Thurrow.

Some community members were highly opposed to a commercial presence in the residential area.

The owners of the properties were also not made aware of a community meeting and “were shocked and saddened at what happened that night,” according to McPharlin.

Responding to the tone of the meeting, Alderman Burns decided that the new zoning rights necessary for the properties to be converted into a bed and breakfast would not be granted.

Back at square one, the houses remain on the market at $1.1 million each, with no clear future. The properties are greatly in need of restoration, the cost of which is estimated around the order of $2.5 million. It’s hard to imagine a prospective  buyer that wouldn’t be discouraged by the upfront expense necessary just to render the properties livable. And if the houses stay on the market unrepaired for another two years, historical and architectural experts said at a forum last month, damage to the structures will become irreversible.

“You can imagine someone coming along and having that same amount of passion about that weekend and obviously have lots lots of spare cash. I’ve been trying to find a billionaire who wanted a pet building and to take them over,” said Thurrow.

While awaiting their savior “billionaire,” the properties have opened their doors more frequently to the Kenwood public than ever before. A host of events to explain the cultural significance of the properties and open-house showings have strengthened the bond between Lloyd Wright’s early bastions and Kenwood neighbors of the now.

Wright kind of re-imagined modern architecture from the inside out,” said Jack Spicer, a member of the board of the Hyde Park Community Conference and Chair of the Preservation Committee. Stating he “couldn’t care less” about the bed and breakfast debacle, Spicer stressed that the salient issue is the upkeep and restoration of the homes’ internal design.

“And [Wright] really did it. He did something in the McArthur house that you’ll see again in 1959 at the Guggenheim in New York. A weird, absolutely brand new way of organizing space. And he’s already doing it in 1892. He hasn’t figured out how to make the outside of the building reflect what he’s doing on the inside, as he does in the Robie house,” he said.

The interiors of the homes, the way that the light, passing through art-glass windows, travels leadingly between rooms, is where Wright’s signature style is laid bare.

“Standing from the outside you look at them and think, uh, not the height of Wright’s career. But once you go inside you see: He’s already got it. He’s already figured out this magic formula for making you experience interior space in a whole different way.”

Although their financial future is uncertain, the Kenwood community’s newfound investment in the homes bodes well for their future. A master of marrying context and mortar, Wright was continually seeking to integrate with the landscape. Through informational meetings and open-house showings, Blossom and McArthur houses may be finally staking their ground in Kenwood.

For Spicer, the doors to Wright’s legacy in Kenwood are wide open.

The South Side Weekly needs your support