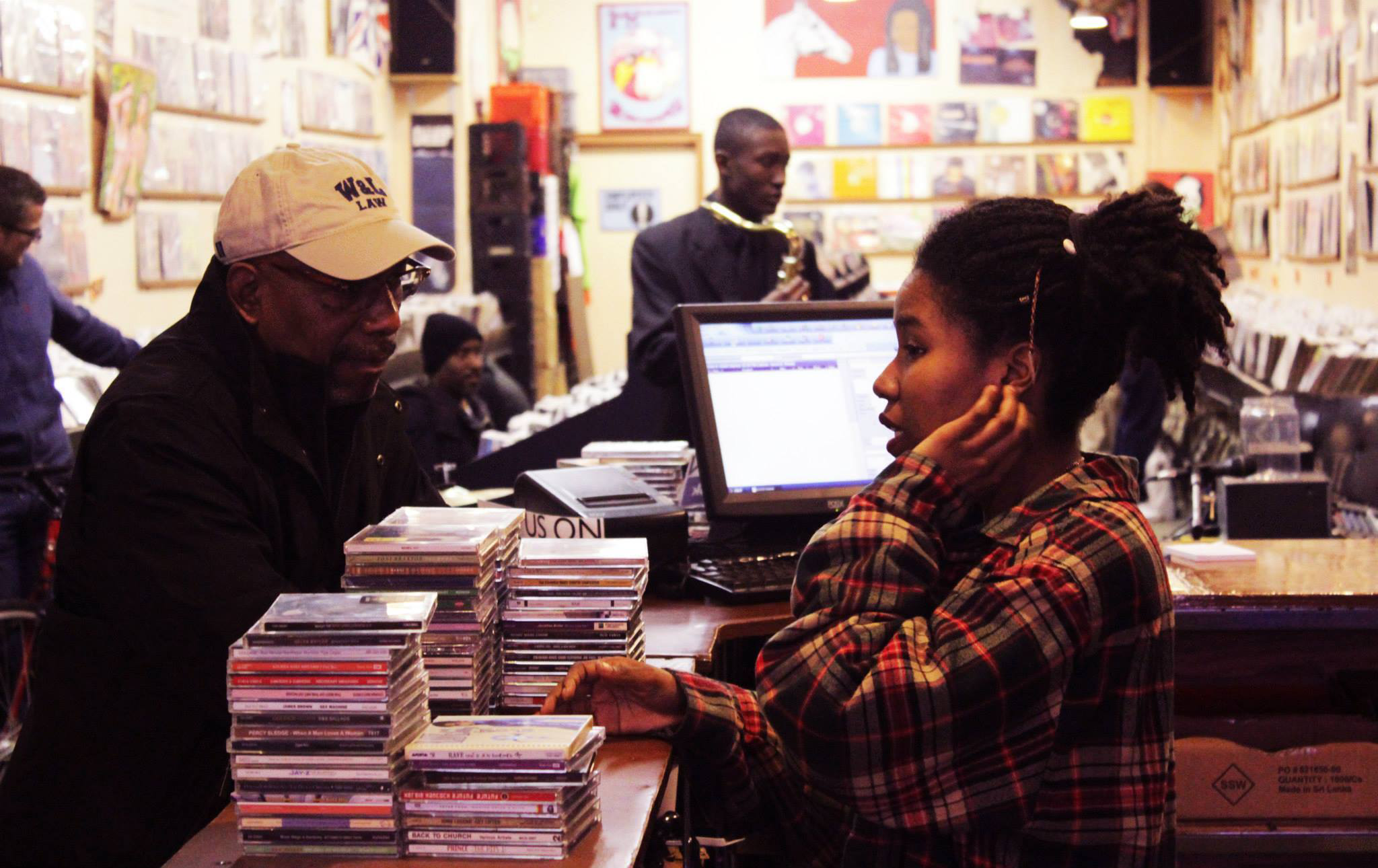 Manisia Larkins was in full-on manager mode at Hyde Park Records on a rainy Chicago Thursday. “Yup!” she rang out over and over, taking inventory of the compilation records her co-worker named from the back of the store. Larkins, hair buzzed short on the sides and streaked through with blue, cuts a familiar figure at Hyde Park records, having been on staff for the past eight months. She’s also an up-and-coming musician who dropped her first record, “DocRot,” earlier this year.

The record, suitably strange and altogether engrossing, serves as testament to Larkins’s eclectic and varied tastes. Labeled alternately as “neo-pop,” “neo-soul,” and “cosmic jazz-hop,” the record is (obviously) tough to pin down.

Beginning with “Live or.,” a languid cover of The Smiths’ “Heaven Knows I’m Miserable Now,” the album progresses through a hazy maze of samples ranging from an extended use of Billy Joel’s “My Life” to snippets of Kanye West’s “College Dropout,” to what sound like public service announcements. These samples are supported throughout by Larkins’s muffled croon. It’s a fascinating soundscape, industrial at points, melodic at others, always lo-fi and wandering. Larkins’s voice forms the backbone of all of the songs, often a warped and twisted imitation of itself, transformed into its own changing instrument.

For Larkins, the album was born out of two main sources: first, an intense need for self-expression, and second, a wealth of influences.

After returning to Chicago from Washington, D.C., where she was a student at Howard University, Larkins started work on the record in piecemeal fashion. “It started off as little tinkerings [that] slowly morphed into an actual thing,” she explained.

“I went through this emotional depression. It’s good though! Because it ended up being this thing I got really passionate about, and so then I ended up actually creating something out of it.”

Production on the album is lo-fi but effective. Larkins taught herself production, an interest sparked and fostered by the process of completing the album. “I started experimenting with it and then it slowly became something I realized I could do, and now I realized that it’s also a way I can make money,” she said. She plans on slowly starting to produce as a freelancer; she has a few projects lined up and she hopes more are on the way.

Music, in one form or another has been a part of Larkins’s life “forever. I was in choir when I was three, and I did it again when I was in the third grade, and I never really stopped after that.” At Howard, Larkins was a music major, an undertaking she says brought its own share of difficulty. “It was really hard because I had to learn a lot,” she said. “Being a singer I didn’t really learn a lot of theory and everything like that, so going in straightaway I had to learn so much off the bat.”

Her hardships weren’t limited to the academic side of things, either. Larkins says that she faced trouble balancing her particular brand of self-expression with the expectation of the school. For her, “it was really just about expressing myself as an artist, which I don’t think music school really teaches you how to do. I had to get out of there.” So she did, and Chicago seemed the best, and really only, option. “I just really like the indie ,eclectic culture of Chicago…and that’s why I came back. Here, you can really do you and be as funky and weird as you want and still stand out.”

Chicago’s eclectic nature is certainly in Larkins’s wheelhouse. Her influences come from all over the map; some are apparent, some are not. The jazz godmothers she cites, Ella Fitzgerald and Sarah Vaughan, make sense. Even Kanye, or Kid Cudi, whose unique production styles seem to have influenced Larkins, seem connected. When Larkins throws in Radiohead or Pink Floyd in the same sentence, things start to get loopier. In the end, though, each cited influence adds something perceptible to the mix that is Larkins’s music. Radiohead provides the electronic backdrops and wild experimental spirit, and the conceptual spirit of “DocRot” is derived from Pink Floyd.

“It’s just like now, ‘What have we learned?’ ” she said. “Let’s just collaborate all of that together. That’s like my whole thing, I really like to take from different [genres].”

As far as further projects go, Larkins says she isn’t sure.

“I don’t know if I really want to be a solo artist,” she said. “It’s fun though to be able to have full creative license over your whole thing…I don’t know, I may continue to do it, but I definitely want to produce as a solo person for sure.”

As Larkins headed back behind the counter, she chirped her thanks and then immediately dove right back into business. Hyde Park Records seems to be a musical haven for her, a perfect site for inspiration and a transition from music school to living as a working musician. Being around a slew of records all over the musical spectrum definitely complements her wide range of musical influences.

“Being here I get to listen to fucking everything,” she laughed.

And combining influences, says Larkins, is all she can do.