Open on the corner of 19th Street and Morgan, Produce Model Gallery is ready to speak back to its neighbors. Artists Javier Bosques and Maggie Crowley bought the gallery space in early 2016, and debuted its inaugural exhibition, “FRUIT,” on July 23. Originally a laundromat, the artists have kept the original signage in order to preserve its history in the neighborhood.

Bosques and Crowley met at a residency program in Maine called Kamp Kippy. Maine is just one of many states where Bosques and Crowley have gradually forged good relationships with a number of established artists. Bosques, who is from Puerto Rico, went to Cooper Union in New York before completing his master’s at UCLA. Crowley went to Eastern Illinois and Illinois State, where she earned a master’s in art education. She then completed a second master’s at the University of Chicago in studio art. With their combination of East Coast, West Coast, and Midwest peers, colleagues, and mentors, Bosques and Crowley have been able to work with people that they truly admire.

“It is inherent in our vision to involve the community,” Bosques says. “By inviting emerging and established artists from the Chicago artist community and elsewhere, we want to bridge the conversations and see what connections can be made. At our gallery, seventy percent of the profit goes to our artists. That’s more than you’re gonna get at any other kind of art institution.”

Because Produce Model is an artist-run space, the curatorial duo put the needs of their artists first—and “needs” don’t always include money. “We also support a lot of our artists during production in order for them to properly execute or complete a piece that we’re interested in showing,” says Bosques. In the gallery, he pointed out frames and pedestals that elegantly complement the pieces. That Produce Model is able to provide these for the artists is evidence of the cooperative, supportive relationship they’re aiming for. 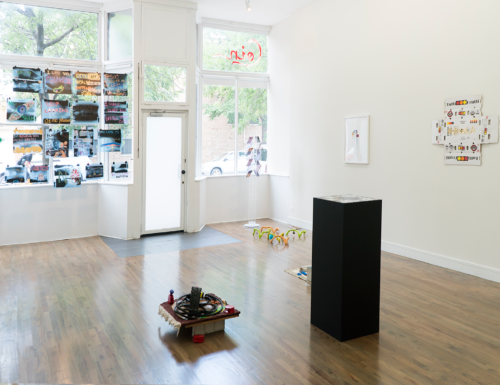 Bosques likes to introduce “FRUIT” with a sculptural painting by the Cuban artist Zilia Sánchez, “Series ‘Las Amazonas.’ ” Bosques studied under her in Puerto Rico, and this piece is from his personal collection, which he used to eat in front of every day while in college. It served as an inspiration to develop and challenge his own work. This sculptural painting’s manipulation of white space has a silent draw; it plays with the way you orient yourself to the gallery walls. “Series ‘Las Amazonas’ ” hangs apart from the other works in the show. When installing the works, Bosques considered the physical space that each piece needed in order for the viewer to best appreciate it.

Hung on the wall adjacent to Sanchez’s piece is “Images in Debris” by Sara Sze. It employs a similar use of white space as an entry point to the work’s subject. The piece is a refreshing departure from the sculptural works she’s more known for: here, her technique was to put her thumb on different parts of the image while the ink was still wet, dragging the paper to spread out the colors and create a dripping effect. Two paintings by Katherine Harvath on the opposite wall work with similar tonal values, but in a more painterly context, setting up a dialogue between the two works.

The most sculptural piece in the exhibition is that of Jessica Stockholder, chair of the University of Chicago Department of Visual Arts. Her piece was originally titled “Expression Blue.” In one of her correspondences with Produce Model, she mentioned the title’s origin: “Oh—Expression Blue, berries are blue.” This was enough of a connection for Bosques and Crowley to put it in “FRUIT.” The installation, which mimics the remnants of a painter at work—a ladder and corresponding surfaces covered in blue—starts a different conversation than the other pieces. It sets up an entryway to the process of making in a way that feels open and full of intuition and play. 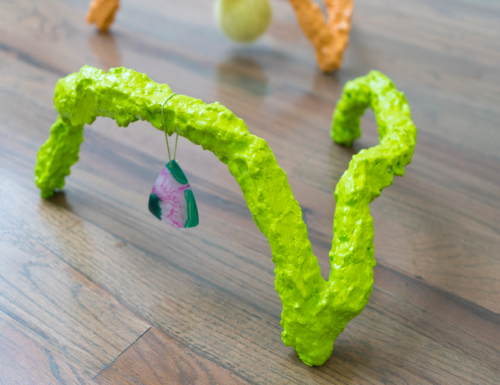 This sense of play is also present in one of the most striking features of the exhibition:  the accompanying text, available on Produce Model’s website. “A Methodological Examination of Fruit Types” is credited to Patricia Rose and has contributions from exhibiting artists Carris Adams, Anaïs Daily, and Sam Vernon.

Rose adopts the form of the colophon (a statement at the beginning or end of a book that typically gives information about its authorship and printing) as a platform for defining the botanical and consumptive properties of fruit and its vegetal allies. While exhibitions often have dry and tired essays explaining the curatorial themes of the show, this text does all that through the power of collaged language, allowing for the pieces to be seen as a fragments or flavors of methodology, instead of trying to collect the exhibition into a whole.

Curatorial statements aside, Bosques realizes another Pilsen gallery might not appear pressing at first glance. “There are of course other studios and galleries around, but we are confident that what we are doing is still necessary,” Bosques told me. “We want to showcase the underrepresented, the disenfranchised. While this isn’t a part of our marketing strategy, our first show includes all women artists—that’s just consequential of the discourse we wanted to create in the space. We want to create unity within a working community.”

Produce Model also wants to give voice to younger, emerging artists. Christine Wang, an artist from Los Angeles, exhibits her paintings of x-rays along one of the windows of the space. “A lot of people ask us if they’re human x-rays or her [Wang’s] x-rays,” says Bosques. Wang paints a series of confrontational messages about her Asian-American female experience and sexuality. She tackles questions like, “What does it mean to be in a body? What does it mean to be subject to the male gaze?” The images and letters are rendered hastily and urgently, speaking out with anger and desperation at Wang’s frustration with the pressure to “define” oneself. 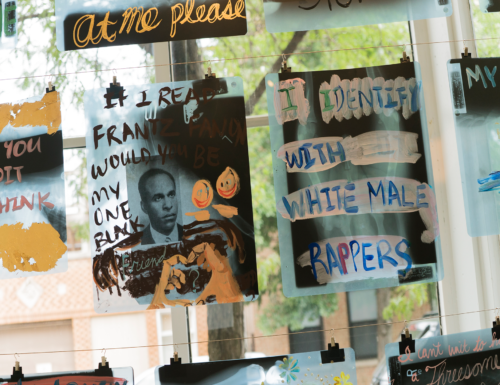 The opposite window echoes these ideas around sexuality and the body: here you can find the work of Katherine Harvath, one of the exhibition’s Chicago-based artists. There is a retail-style postcard rack that has postcards by the artist depicting different kinds of drapery. On the floor beside them are her “Clits.” These neon-colored sculptures were made after the artist learned that the clitoris is shaped very much like a wishbone. They are adorned with early-2000s relics of femininity: puffy rearview mirror charms, small pouches to put your lavender in, and other dangling oddities.

The “Clits” appear almost as if they’re walking, and their sense of movement leads us to the floor-based work of Anaïs Daly, another local artist. She creates sculptural compositions with debris from an abandoned town that she frequents. She photographs the area and then tries to re-illustrate or inform her sculptural work with them. These works function in the way a painting would, but allow for more inspection and reference to the archive.

Bosques finds that “sometimes a little level of support goes a long way. In the U.S., you don’t really find that there is a level of ownership that galleries claim to their artists. We’re not for that, we just want well-curated shows. It demands a different type of attention, but we still want every artist to feel special. We want to be able to put them in dialogue with the right people for their next venture.”

Bosques and Crowley stress community as an entry to art-making while maintaining a vision for work that does not seek to over-define itself. Many collectives and institutions strive for this dynamic, but Produce Model succeeds in a way that’s gentle, compassionate, and “tutti fruitti.”

Five Chicago Women Ahead of Their Time

Five Chicago Women Ahead of Their Time