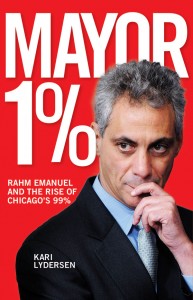 Chicago’s mayoral office has long been home to larger-than-life characters: since the second World War it has seen two unstoppable Richard Daleys, the iconic Harold Washington, and now one Rahm Emanuel, the energetic “tiny dancer” who swooped back into Chicago after serving as President Obama’s chief of staff. Even though we are hardly halfway through Emanuel’s term, we can already see that he, too, will make the history books. What history will say, however, is another matter.

Veteran journalist Kari Lydersen in her new book, “Mayor 1%,” has already stepped into history’s ring. Lydersen, who has written about Chicago for The Washington Post and The Economist, among many other publications, argues that we will remember Emanuel for his economic elitism and his neglect of the needs of the ninety-nine percent. After tracking Emanuel’s eventful rise to mayoral power through Congress and the Obama administration, Lydersen profiles the various interest groups and populations Emanuel has slighted and stomped on during his two years in office.

The eighty-five pages Lydersen spends profiling Emanuel’s pre-mayoral life (including his years spent campaigning for Bill Clinton and on Wall Street) don’t break much new ground, and, indeed, are mostly compiled from biographies and news stories that others have already written. But then the book turns mostly to Lydersen’s first-hand reporting. She lays out a litany of Emanuel’s mistakes, covering his offenses against the mental health movement, the protestors who picketed the 2011 NATO conference, the CPS teachers’ unions, the janitors and workers at O’Hare Airport, and the taxpayers who should have been the rightful beneficiaries of the city’s TIF development funds.

Lydersen tells the story of each of these groups, focusing on memorable characters and the struggles of unions and communities: these include Karen Lewis, the all-star leader of the teachers’ unions, and the late Helen Morley, the fearless matriarch of the mental health movement. For much of the book, Emanuel is actually offstage: Lydersen spends a great deal of time giving oppressed groups a chance to make themselves heard.

By far the best and most clearly argued chapter is the one on the mental health movement, to whom the book is dedicated. Lydersen shows—citing individual stories of loss and strife, as well as larger financial statistics about how little money the closings saved the city—that by closing six mental health clinics across the city, Emanuel wrecked the lives of both individuals and communities while failing to establish any sort of meaningful dialogue with his constituents about the closings. Here she gives some of the most biting indictments of Emanuel in the whole book—or anywhere, for that matter.

The chapter on the janitors at O’Hare, a jarring story drawn along clear battle lines, is also argued with clarity and power. Lydersen relates how the hardworking janitors at O’Hare were laid off by Emanuel, who skated around the unions in order to hire a cheaper non-Chicago contractor to do the airport’s janitorial work.

But while the other chapters are compelling and filled with memorable characters, too, their arguments are not as tightly constructed. Lydersen often does a good job of explaining how Emanuel is able to avoid confrontation and debate with citizens on certain issues, but fails to explain why Emanuel is actually wrong. The debate over the motives of the teachers’ union, for instance, is far from closed: there are many different opinions about whether the unions are a productive or a destructive force for the school system on the whole. Many times, however, Lydersen does not mention the argument of either side, but rather narrates the (often slippery) progress of the debate itself. This paints a portrait of Emanuel as a neglectful and often unfair leader, but does not always convince the reader that Emanuel’s policies are necessarily the wrong ones.

Still, the strength of its accusations (and the quality of the research that backs them up) makes “Mayor 1%” an important work. It is opinionated yet comprehensive, and even if it does not prove that Emanuel is wrong about every issue, it will last because it has managed to give a voice to those who have long been denied one. In many ways, it is as much about us as it is about our mayor.

A review of 'Citizen Illegal', a book of poetry by Chicago Chicano, José Olivarez

In this special segment of The Exchange, we’re sharing many thoughts in response to a few prompts

A review of 'Citizen Illegal', a book of poetry by Chicago Chicano, José Olivarez

In this special segment of The Exchange, we’re sharing many thoughts in response to a few prompts