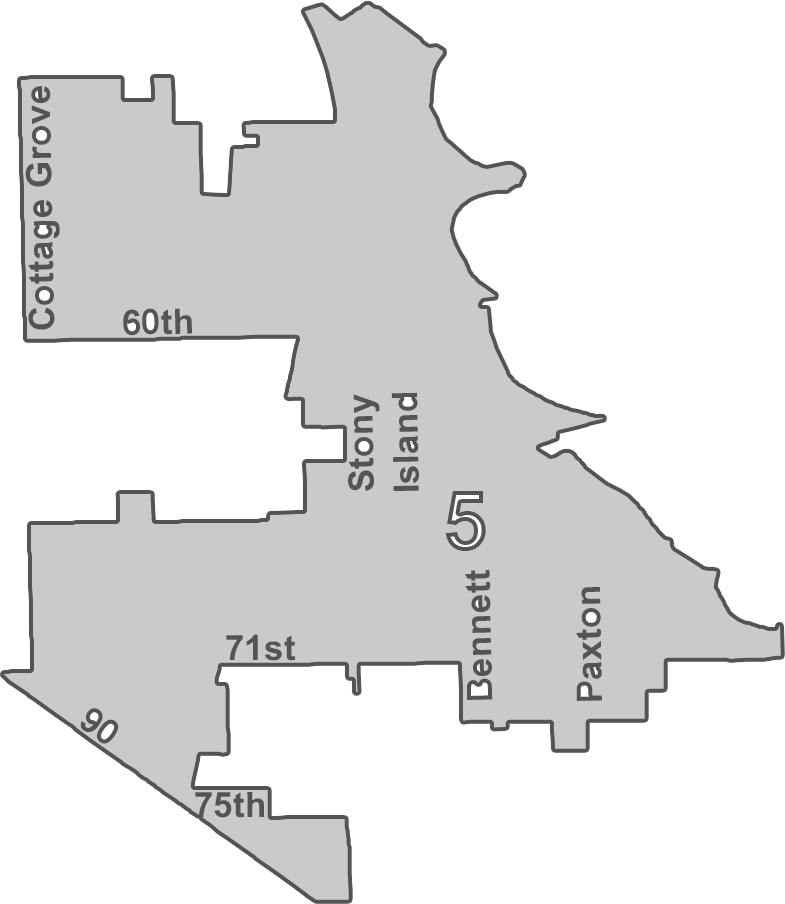 While it once might have been viewed as an earnest attempt to force a return to the progressive, independent politics of yesteryear’s Hyde Park and South Shore, the race for the 5th Ward aldermanic seat has quickly devolved over the last few weeks into just another Chicago political race: unearthed hateful comments, allegations without backing, and absurdly “off the record” press conferences.

After organizer Will Calloway beat out activist and former journalist Gabriel Piemonte for the chance to face longtime Alderman Leslie Hairston in her first runoff, two Hairston allies moved quickly. Marc Loveless, a longtime activist with the Independent Voters of Illinois-Independent Precinct Organization, which has supported Hairston for decades, and Adrienne Irmer, whom Hairston supported in the race for the 25th District state House race last year, sent reporters screenshots of three- and four-year-old Facebook posts made by Calloway calling same-sex marriages “abominations” and suggesting pastors not preaching actively homophobic material might themselves be gay. Irmer held a press conference condemning Calloway the next day. Calloway took days to respond, putting out a Notes app screenshot apology saying he had “no intention of attacking” queer people with his Facebook statuses and that his thinking had “evolved” on the issue.

He then promised to hold a forum to hear from LGBTQ residents, but when he did, he refused to answer questions from the media on the record and, though he apologized at the forum, he accused Hairston supporters of “falsifying” allegations against him, without specifying further. Hairston, for her part, has been citing allegations of unpaid parking tickets by Calloway in appearances; by way of proof, her campaign has supplied media outlets with a list of tickets that it says are associated with Calloway, many of which are listed as unpaid on the document. However, the Weekly was unable to independently verify the connection between the tickets and Calloway. (Calloway’s campaign manager has responded that all issues are resolved.) Residents have also voiced suspicions about the election year–timing of the newly-announced grocery store on 71st Street, where a former Dominick’s has sat vacant for years.

The non-candidate actor looking just as bad as the candidates has been Piemonte, who immediately backed Calloway after coming in third on February 26 and has vehemently defended him on social media. Troublingly, especially considering he is the former editor of the Hyde Park Herald, he insisted to his former newspaper that much of Calloway’s forum was not quotable. And most irresponsibly, after Calloway’s campaign office window was shot on Monday, he tweeted within hours that the shooting was politically motivated, also with no evidence. Left in the middle of all this, of course, are the residents of the 5th Ward. (Sam Stecklow) 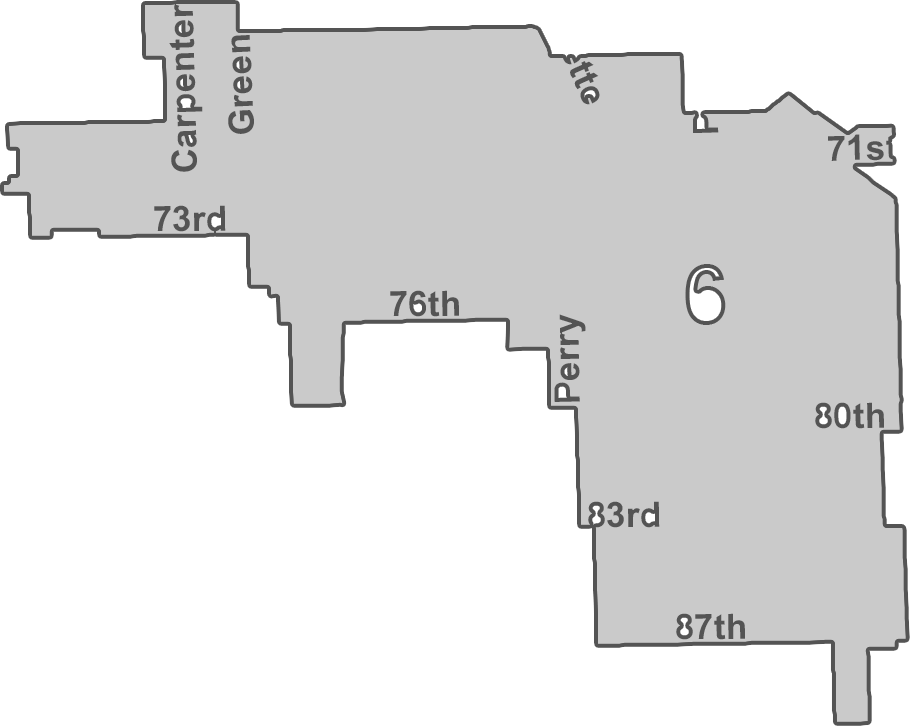 After a few days of tick-tock headlines detailing the vote-by-vote ballot count in the 6th Ward, it became apparent that two-term Alderman Roderick Sawyer had been forced into a runoff by accountant and activist Deborah Foster-Bonner, who also defeated pastor and police officer Richard Wooten. A look at the precinct-level election map gives a hint as to what went wrong for Sawyer: In the vote-rich Chatham area, he consistently received under fifty percent of the vote, giving credence to allegations from Foster-Bonner and Wooten that some parts of the ward—namely, his Park Manor area—receive better services and more attention than others.

Both candidates may look to boost the extremely depressed voter turnout in the chunk of Englewood that lies in the 6th Ward. It will be difficult. Englewood has been awkwardly gerrymandered into five different wards for decades, resulting in some of the lowest turnout in the city and a widely disenfranchised electorate. It may, ultimately, come down to money, as it often does in Chicago. In the month of March alone, Sawyer has raised over $112,000 from unions, corporate PACs, fellow elected officials, family members, and development interests. Foster-Bonner has just a fraction of that on hand, largely self-donated or contributed by her son and campaign manager. (Sam Stecklow) 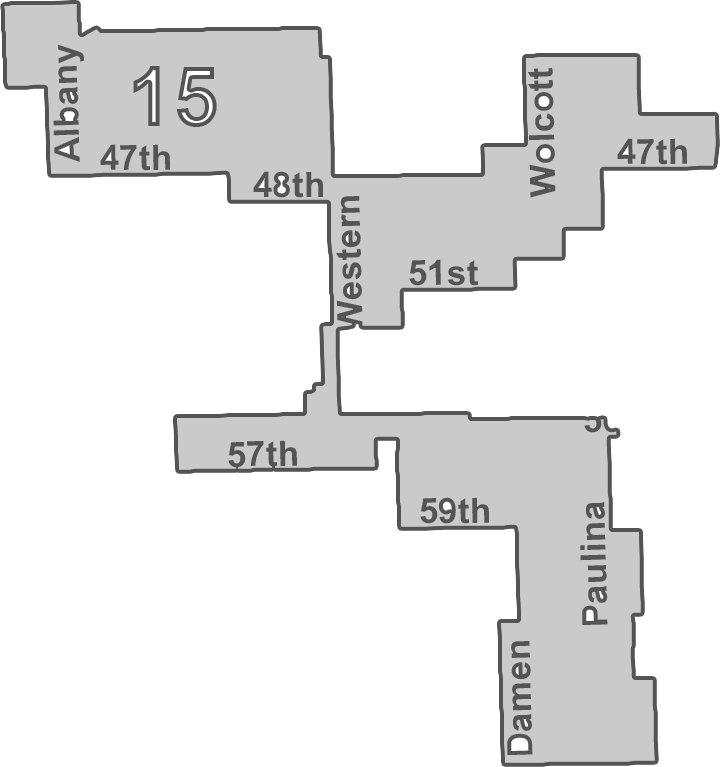 Heading into last month’s runoff, 15th Ward challenger Rafael Yañez appeared to have a lot of momentum. He’d picked up endorsements from local and national progressive forces like the Chicago Teachers Union, U.S. Representative Jesús “Chuy” Garcia, and Our Revolution, and he faced an opponent, incumbent Raymond Lopez, who has caused enough controversy that a young progressive activist group named “Fuera Lopez!” formed to advocate for getting him out of office. But Lopez—who has the backing of Mayor Rahm Emanuel, ties to powerful city interests like Ed Burke, and the endorsements of both the Tribune and Sun-Times—nearly avoided a runoff. Out of 5,113 total votes—a below-average turnout of only 27.1 percent—Lopez received 49.7 percent and Yañez 21.83 percent; three other progressive challengers split the rest of the vote. Lopez got the most votes in all but two precincts.

Given Lopez’s strong showing, the likelihood of prevailing in the runoff looks slim for former police officer Yañez, who also fell to Lopez in a runoff in 2015. But Yañez has received the endorsement of third-place finisher Berto Aguayo, who got more votes than Yañez in some Back of the Yards and Brighton Park precincts. Yañez fell most behind Lopez in the West Englewood section of the ward, but endorsements of former fellow challenger Joseph Williams, who’s from West Englewood, and former mayoral candidate Willie Wilson, who got the most votes there, could help him.

When it comes to policy, Yañez and Lopez have little in common. Yañez has joined activists to oppose controversial mayor-supported projects like the $95 million police academy and Lincoln Yards development; Lopez voted for both. Yañez wants to reform the use of Tax Increment Financing districts and aldermanic prerogative; Lopez says both have benefited his ward. Yañez, despite his background in the police force, has made police accountability a top issue: he says that tough policing is not the solution to gang violence and that addressing violence in the ward requires more investment in schools and increasing the availability of social services and jobs. Lopez says that Yañez’s proposals threaten public safety in the ward and prides himself on having “confronted gangbangers & their enablers.” (Mari Cohen) 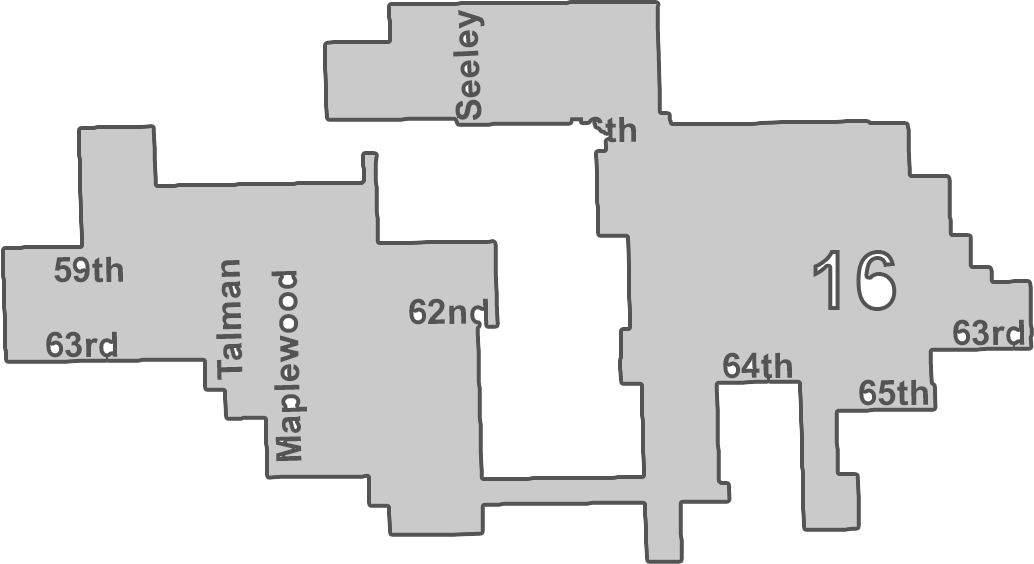 The runoff campaign in the 16th Ward picked up where the general election campaign left off: set narratives about each candidate, a lack of engagement from both, and intimations over social media. The narratives are these: incumbent Alderman Toni Foulkes has represented much of Englewood since 2007, first as alderman of the 15th Ward before redistricting in 2011 forced her to run in the 16th Ward in 2015. Since then, she has had trouble connecting with her new constituents and struggled to coordinate city services for her new territory. Her challenger, Democratic committeeman Stephanie Coleman, faces accusations of nepotism and inexperience—her mother is former 16th Ward Alderman Shirley Coleman, and she has little career experience outside of the political arena.

The candidates have been here before: In the 2015 election, Coleman forced Foulkes into a tight runoff, which Foulkes won by less than 150 votes. This time around, Foulkes looks to be losing ground. Coleman beat her in the general byx thirteen points, and in a ward with turnout as low as the 16th, that might be a death knell in and of itself. Foulkes often touts her work on economic development around the intersection of 63rd and Halsted Streets, but her poor showing in the precincts immediately surrounding that area, and the rest of the ward, shows how little that new prosperity has spread. This is of course not Foulkes’s fault, but her soft-spokenness is—as Coleman regularly points out, Englewood needs strong leadership to counteract the disinvestment, disenfranchisement, and population loss of the neighborhood. It’s just hard to see how Coleman will provide that. (Sam Stecklow) 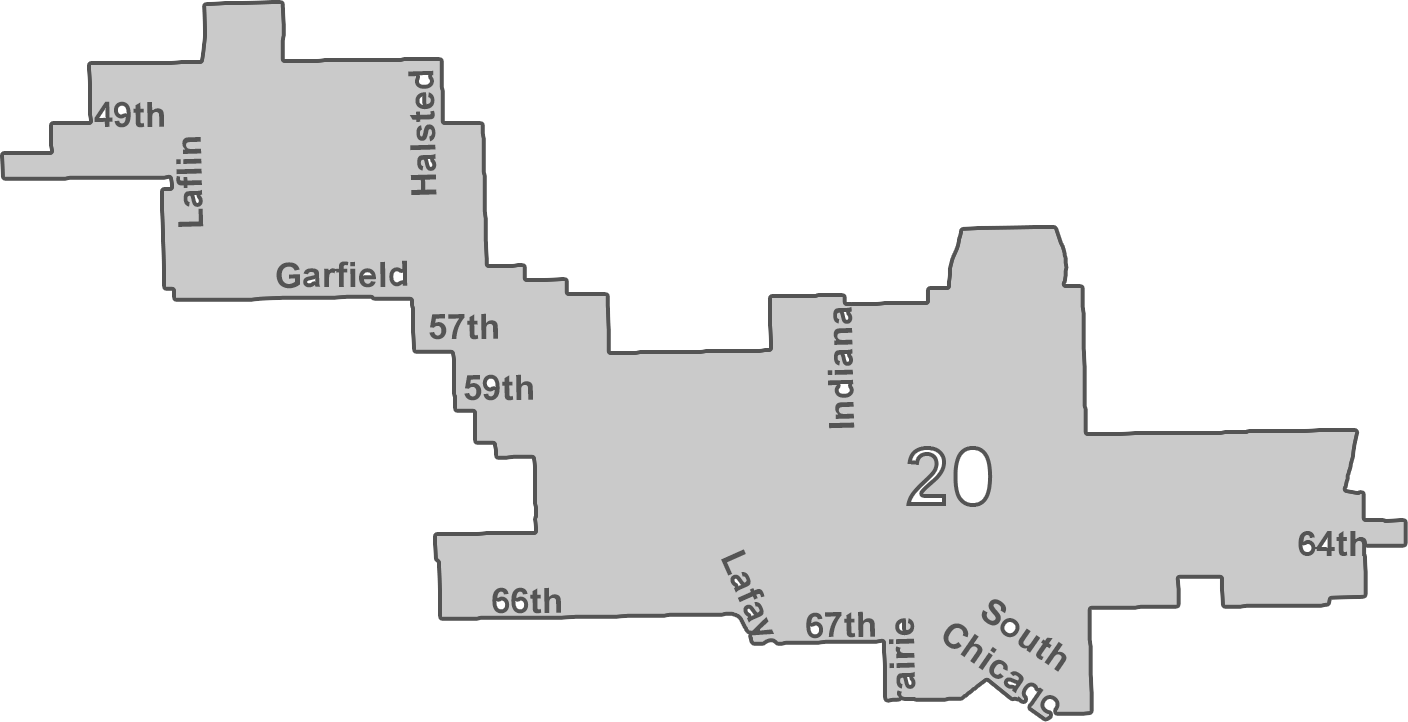 At one point, fifteen candidates had (more or less) declared that they were running for 20th Ward alderman. Nine ended up on the ballot, after a much-publicized deluge of petition challenges. Now only two remain ahead of the runoff election on April 2: public education organizer Jeanette Taylor, and former educator and consultant Nicole Johnson. Taylor came out ahead in the first round with twenty-nine percent of the vote; Johnson was second at twenty-two percent.

In the month since the first round, Taylor has pulled in a dizzying amount of money—well over $100,000—to her campaign war chest, which now totals about $230,000. Most of the funds came from the progressive groups and unions that have supported her campaign since the beginning: United Working Families, Chicago Teachers Union, SEIU, Chicago Federation of Labor, and others. Johnson, meanwhile, lags behind with about $70,000 on hand. She doesn’t have support from many labor groups (the International Union of Operating Engineers, frequently associated with Speaker of the House Michael Madigan, is one exception), and much of her money has come from well-connected political donors. Among Johnson’s biggest contributors are Timothy Schwertfeger and wife Gail Waller. Schwertfeger is a former investment banker who donated over $155,000 to Bruce Rauner’s 2014 campaign. He now sits on the board of Emerald South, a newly formed group that is aiming to bring more development to the mid-South Side with the arrival of the Obama Presidential Center.

Whoever wins will almost immediately face a test of her newfound power. Last week, the Cook County Land Bank chose a proposal for the redevelopment of the Washington Park National Bank Building at 63rd Street and Cottage Grove Avenue. The winning plan, jointly proposed by DL3 Realty and Greenlining Realty USA, would demolish the bank building and replace it with a mixed-use structure that would house a bank, a café, and a nonprofit incubator run by the University of Chicago. Historical preservationists and some community members objected to the tear-down. Later that day, Taylor said she wouldn’t sign a demolition permit for the building. “I would hope that the county would take into full consideration the wishes of the everyday resident of the community and not just those of the University of Chicago,” she wrote in an email to the Weekly.

This Monday, after getting into a Twitter spat with 5th Ward aldermanic also-ran and Woodlawn activist Gabriel Piemonte in which she expressed some support for the accepted plan, Johnson said she also would oppose demolition, accusing the Land Bank’s president, Rob Rose, of “blatantly reneging on his pledge to listen to the community.” (The principal of Greenlining Realty, Lamell McMorris, has donated $1,000 to Johnson’s campaign.)

The Land Bank’s plan is part of a years-long effort to redevelop the corner of 63rd and Cottage Grove (a major Woodlawn transit hub), as the Weekly reported earlier this month. Since the local alderman has to sign off on any application for a demolition permit in their ward,  the plan may have to change in the face of opposition from the only two remaining candidates for the seat. (Christian Belanger)

Update 3/28/19: The 5th Ward writeup originally read that Alderman Leslie Hairston did not have evidence of Will Calloway’s unpaid parking tickets. Her campaign provided documentation of some sixty tickets that it claims are associated with Calloway, but the Weekly was unable to independently verify this information.