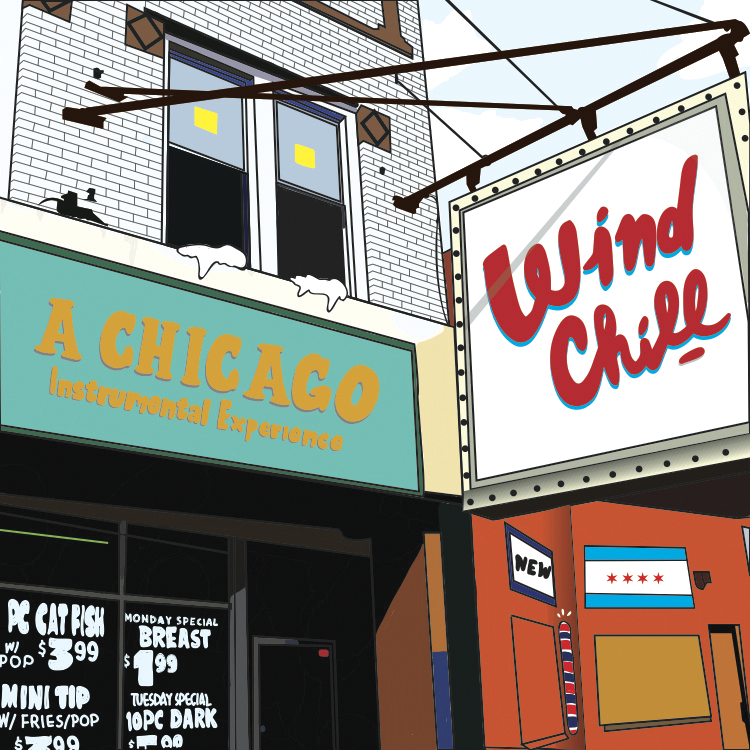 The past three years have seen a massive resurgence of interest in the Chicago hip-hop scene. The reasons for this sea change have been repeated ad nauseam in hip-hop blog posts, documentaries, and op-eds. But regardless of whether these chronicles focus on the nihilistic violence of Chief Keef and the drill scene or the label-defying charisma of Chance the Rapper and the SaveMoney affiliates, the perspective is almost always focused on the rappers and not the team of artists supporting them. In particular, Chicago’s innovative hip-hop producers have been almost entirely written out of the narrative.

Ben Niespodziany, a journalist who writes under the name Neonpajamas for the hip-hop blog MishkaNYC, hopes to correct this oversight. On May 27, the day of his twenty-fifth birthday, Niespodziany released Windchill: A Chicago Instrumental Experience, a project which collects eighteen previously unreleased instrumental tracks from some of Chicago’s most influential producers. The tracklist includes contributions from Windy City-born heavy-hitters like Thelonious Martin , a nationally-known rapper who has produced projects for Curren$y and others, the local collectives THEMpeople, who recorded Chance’s first mixtape in Pilsen, and OnGaud, known for its collaboration with Mick Jenkins, Chicago’s unofficial poet laureate.

Niespodziany met many of these producers through his work as a Chicago-based music journalist. Though Niespodziany was born in northern Indiana, he decided to move to Chicago to chronicle the city’s exploding music scene. His early interviews with Thelonious Martin and the rapper/producer Tree—who also appears on the WindChill project—helped Niespodziany develop connections with many of the city’s vanguard hip-hop artists.

After spending his college years listening to a steady rotation of beat tapes from vanguard producers like Blockhead and Wax Tailor, Niespodziany became passionate about the instrumental side of hip-hop. Yet he found that not all of his favorite Chicago producers were particularly eager to be interviewed. “They are so focused on the art, that as soon as they finish one project they just move right on to the next,” he says of THEMpeople. ”They’ll have me over to their place to listen to music but the actual process of sitting down and doing anything that’s not directly related to the music is just not in their head. It’s just about the music for them.”

A collective like THEMpeople, which is run by just four producers—without publicity or management–can have a difficult time becoming well-known. But Niespodziany says THEMpeoplethey have managed to become “the most well-received underground group in the city” strictly through word-of-mouth, and have released what he considers one of the best projects of the year with their latest mixtape, Smoke Breaks IV.

In order to attract more attention to these groundbreaking artists, Niespodziany began soliciting instrumental tracks from many of the artists he interviewed. While THEMpeople was the first group he contacted when he began planning the mixtape in March, they didn’t sign onto the project until late May, just days before the release, when they saw that the lineup for the tape included names like Tree, Thelonious Martin, Martin $ky, and OnGaud.

Niespodziany spent months organizing the submissions and revising the track listing. Part of the challenge came from the wide range of styles presented on the tape.

“With Doc da Mindbenda, Thelonious Martin, even Tree, there is a little bit more of traditional style in the sense that they’re more focused on finding old samples and have more breezy, summertime sound in their production,” he says. On the other end of the spectrum, Niespodziany recruited producers like Boathouse and Hippie Dream, who he says, ” have more of like a cloud rap, slowed-down West Coast style, almost like Clams Casino.” Niespodziany tried to bridge these two worlds by using songs like OnGaud’s “Whooo”—a track which pairs heavily swung drums with a modulating, pitch-shifted vocal sample—to create what he calls the sense of “speeding through traffic,” and transition from “the traditional barbeque song into the more up-in-the-clouds tracks.”

In addition to contacting local producers, Niespodziany also tried to showcase the works of local visual artists on the album’s multiple covers. Though he initially sought out Hebru Brantley, the artist responsible for Fake Shore Drive’s concert posters, he eventually gave up when he found out that Brantley had been commissioned to work for Lebron James. Instead, he sought out three other illustrators.The main cover—which shows a stylized Chicago chicken shack storefront— may look familiar to fans of SaveMoney. The artist, Nico Washington, has designed album art for several SaveMoney releases, including projects by Leather Corduroys and Dally Auston. Niespodziany also recruited two more illustrators: Gold Status—the brother of WindChill producer Smoko Ono—and Logic, a frequent THEMpeople collaborator.

Just five days after its release, the project has already received positive mentions from some of Niespodziany’s favorite blogs, including Fake Shore Drive and Mass Appeal, as well as a few unexpected European sites. Niespodziany, who is now also a contributor for other music review sites like Pigeons & Planes, Potholes in my Blog, OG Matress, and Viper Magazine, hopes to expand the WindChill project into a trilogy, with collections of tracks by national and international hip-hop producers included in subsequent tapes.

For now, this vision seems to be restrained only by Niespodziany’s budget, which is effectively nonexistent. Niespodziany, who supports himself primarily through part-time employment as a social worker and as circulation desk assistant at the University of Chicago’s Regenstein Library, is charging no money for his releases and has paid nothing for the submissions he’s received.

But Niespodziany wants to emphasize that the project isn’t about him—it’s about the artists. “Respect the producers, man. I think beat tapes and instrumental projects are so cool,” he says. “If they didn’t exist, it would just be spoken word for a lot of rappers. If there was no backdrop, it just wouldn’t be music. At the end of the day, I think they need more love.”

Who Are the Organizers?

“When I see police, I see 100 other jobs smashed into one thing with a gun.”

At Project Onward, an Artistic Community Adjusts to COVID-19

The Student Fight to Get Cops Out of CPS

In high school votes on SROs, student activism made all the difference