Chicago is a city obsessed with neighborhoods, neighborhood boundaries, and neighborhood character, and therefore with neighborhood change. Demographic trends, from the rapidly declining black populations on the South and West Sides to the gentrification of the Northwest Side, get a lot of play in the media and in conversation. Which is why it’s weird that we’re in the middle of a demographic transition that is already of historic importance for the city and almost no one is talking about it.

In 1990, there was virtually no presence of Asian-Americans east of the Dan Ryan into the South Loop or Bronzeville, or south of Pershing (39th Street), except for Hyde Park. (I’m going to say “Asian-American” here, because those are the census numbers I have, though it appears that nearly all of the Asian-Americans in this part of the city are of Chinese descent.) There was no significant (over 10% of residents) presence east of Racine (1200 West) or so, or south of 31st Street. By 2010, there was a continuous band of Asian-American population down Archer Avenue, the backbone of the Southwest Side, nearly all the way to Midway Airport, as far south as 51st Street and as far west as Cicero (4800 West). There were continuous pockets of neighborhoods over 10% Asian-American stretching from the lake to California Avenue, more than four miles away—and a nearly continuous stretch from the lake to Damen, more than three miles away, that were over 20%.

If it seems that I’m making a big deal out of a few percentage points in some areas, it’s important to note that historically, Chicago-area segregation has led to situations in which many neighborhoods would have virtually no representation from one or more ethnic groups; that was certainly the case with Asian-Americans on most of the Southwest Side. Breaking that barrier from “none” to “a few” is a notable step.

To be fair, this alone isn’t especially dramatic in the context of Chicago neighborhood change. Certainly in the white flight era, a neighborhood’s racial makeup could transition much more quickly, and the gentrifying parts of Logan Square, say, may appear more unrecognizable to a decades-long resident than sections of Brighton Park that have gone from zero to eight percent Chinese-American in twenty years.

But there are several reasons, I think, that this movement is really notable. First, for many years Chicago has been seen by many as culturally and politically divided into three major ethnic groups: black, Latino, and white. In fact, the city was notable for how evenly divided the population was between those three groups, and for the extent to which their segregation allowed racially-specific geographic political representation. But though Asian-Americans have been in Chicago for a long time—in 2012, Chinatown celebrated its 100th year—they are only now beginning to reach a point where the population is large enough, and geographically concentrated enough, to demand that kind of local political representation. 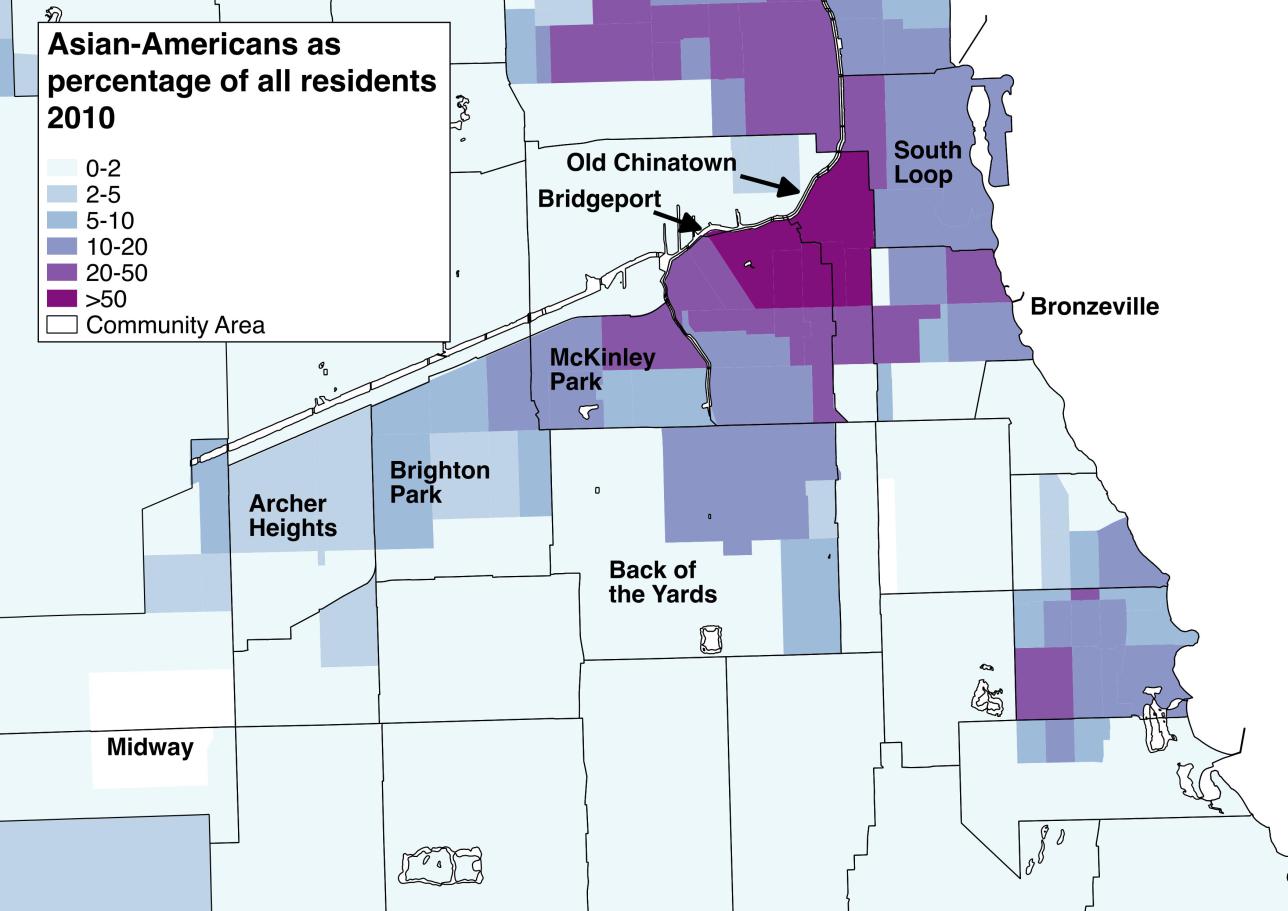 Already in the 2010 district remapping, neighborhood organizations were able to lobby—unsuccessfully—for a ward around Chinatown that would have been over 40% Asian-American. And in the March primary elections, one of the people asking for that remap, Theresa Mah, beat out a Latino candidate for the Democratic nomination for a state legislative seat. By the 2020 remap, it seems very hard to imagine that there will not be an Asian-American majority, or strong plurality, seat on City Council, bringing a kind of ethnic representation to City Hall that that community has lacked until this point.

Second, the growing Asian-American presence on the Southwest Side offers the city a glimmer of hope for a demographic problem that it seems to not yet realize it has: the dramatic national decline of Mexican immigration. That was a key factor in Chicago’s poor showing in recent census estimates of total populations, as Latin American immigration had essentially been keeping Chicago afloat demographically since at least the 1990s.

The major beneficiary of that influx was the Southwest Side, where predominantly Mexican-American families rejuvenated neighborhoods whose white ethnic occupants were either aging out or moving to the suburbs. But now it appears that Mexican-Americans are following Lithuanian-Americans down Archer Avenue past the city limits, and without new arrivals, it’s unclear what will happen to those gateway neighborhoods. Between 2000 and 2010, Pilsen lost a quarter of its Latino population, or 10,000 people—far more than the 850 whites it gained, and so probably not explained primarily by gentrification. Little Village, which was certainly far away from the gentrification frontier in 2010, lost 10,000 Latinos as well. As the 850 number suggests, gentrification isn’t likely to spread too far down Archer Avenue in the near future. Rather, Chinese-Americans appear to be the most likely candidate for keeping the Southwest Side demographically healthy.

Third, Asian-American residents haven’t just spread west from Chinatown; they’ve also spread east, to Bronzeville. While I’ve written about how one of Chicago’s longstanding (and, of course, deeply and transparently racist) patterns of neighborhood change—non-Blacks never move in significant numbers to Black-majority neighborhoods—is being threatened by Hispanics, whites, and Asian-Americans in spots all over the city, nowhere has a Black-to-another-ethnic-group transition gone farther than in northern Bronzeville. The area bounded by the Stevenson Expressway, the lake, King Drive, and 31st Street was 73% Black in 1980, and just 55% Black (and 36% Asian-American) by 2010. The census tract just to the west has gone from 96% to 73% Black, and 1% to 13% Asian-American, over the same period; just to the south, in the Lake Meadows area, the numbers are 92% to 75%, and less than 1% to over 18% respectively.

Again, these are a far cry from the total demographic overhaul that we’re used to seeing in some areas—but nevertheless, it puts the city in completely uncharted territory. As far as I can tell, this is the first real racial desegregation of a black neighborhood in the history of Chicago that did not involve the wholesale government-led demolition of Black housing, as in Cabrini-Green. And the implications for Bronzeville go beyond the Chinese-American community, since creating a substantial non-black presence may open the doors to people of other ethnic backgrounds as well, especially in an area adjacent to the rapidly gentrifying South Loop.

Finally, there’s another point to be made here, which is that it’s very odd that all of this has flown so far under the radar. When discussing this in the past, I have suggested it was because most media outlets only really care about neighborhood change when white people are involved, either as colonizers (gentrification) or evacuators (white flight). A transition from one group of people of color to another group of people of color just doesn’t rank.

This article originally appeared on City Notes, a blog about urban issues by Daniel Kay Hertz. See more at danielkayhertz.com or follow Daniel at @DanielKayHertz.