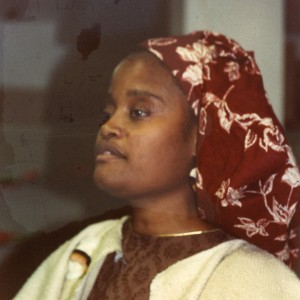 One of the most striking recordings in Cohran’s catalogue is “African Skies,” a 1993 concert that the space-jazz pioneer recorded, fittingly, at the Adler Planetarium. The concert was originally held as a tribute to Cohran’s mentor, Sun Ra, who passed away earlier that year. Compared to Corhan’s earlier recordings, “African Skies” is defined by a more meditative melodic mode. A key example of this sound is found on the album’s standout track, “White Nile.” Here, the sounds of the harp and the Frankiphone (Cohran’s trademark modified lamellophone or electric “thumb piano,” named after his mother, Frankie) interweave into an entrancing, harmonic tapestry. The song is defined by a six-note harp motif that loops throughout the ten-minute duration of the track. Beneath this main figure, other sounds duck in and out of the song. The main rivals to the harp’s prominence are a haunting, wordless vocal line, sung by Aquilla Sadalla, and a subtle trumpet solo played by Cohran himself. The trumpet creeps in near the track’s five-minute mark, at the midway point of the composition. Cohran introduces himself here with a single, breathy note that’s sustained for nearly half a minute. The entire solo is a triumph of restraint, as the trumpet fades away just as quietly as it came in. As the track draws to a close, the string plucks steadily become softer and subtler, and the instruments themselves gradually die away into silence. At the song’s end, there is a feeling of an entire world that is lost. “White Nile” is one of the finest examples of Cohran’s ability to construct entire planets out of pure sound.

Charting the legacy of the space-jazz pioneer