OBY, a hip-hop big band group made entirely of musicians who also play in local churches and whose ethos is a fusion of hip-hop with gospel and jazz, has been making a splash in the last few months. Following the February release of their first EP, Becoming, OBY has taken to playing shows throughout the city, bringing their smooth sound and rolling groove to tiny practice rooms, the wide stage of The Metro, and anywhere in between. The full sixteen-piece band includes keyboard players, a horns section, and a disc jockey. The Weekly spoke with three members of the group—James Boyd III, Isaiah Oby, and Terry Patrick—at Columbia College about their musical roots, what it takes to bring together sixteen unique sounds, and their and connections to Chicago.

What are your origins in music?

James: This started with me being like a little kid and wanting to be like my dad, ‘cause he played the drums, I started to love the drums. I started playing drums in the church. I didn’t really make that decision that I wanted to do this the rest of my life until I was in high school. I kinda became a musician when I started to play the piano too, cause drums are loud. Once I got to college, I realized how I really wasn’t good at piano. [Then] I met OBY—I wasn’t a band member at first.
Isaiah: (laughing) That’s right, he wasn’t a band member at first. He just kept coming to rehearsals.
J: Next thing I know, he threw a bongo in my hands and was like, “play percussion.” I get a song, gradually becoming a member.
I: My origins in music are actually really embarrassing. I am a pastor’s kid, from Madison, Wisconsin. There’s a very strong community in music there, but I just wasn’t aware of it, or part of it. I was really nerdy in high school. Started playing drums, then bongos, took lessons, but I just played in school. Thought I was cold, but I wasn’t very good. Then we got cable—the Jonas Brothers was popping, High School Musical was that stuff. So because of High School Musical, I joined show choir. I loved performing, singing and dancing. So then Camp Rock came out: I watched Joe Jones woo a girl on the guitar, like, “I could probably do that.” So I picked up a guitar, started learning that.
Terry: I started playing piano around five or six—
I: He was actually born cold. Out the womb snapping. Transcribing Bill Evans right out the womb.
T: —my father was practicing on the keyboard and he was like “Son, play this.” He told me the notes to play and then the next day he asked me if I remembered it, and he showed me. The next day after that, I remembered it. It was “Ode to Joy,” a little Beethoven piece. In church I wanted to play drums. Then the jazz band, playing keys. I met Oby when I got here at Columbia [and they asked], “You wanna be in my band?” I said no at first. After that, like a year later, I—
I: Then he heard we was good, and he was like, “I guess I’ll join.”
T: There was a series of other keyboard players that left. I was like, “Who’s playing with Oby?” They were like “Sure, come play.”

Isaiah, as the emcee, how do you handle decision making in the band?

I: I try my best to make decisions the band would agree with. We’ve had to turn down a lot of shows recently based on who can make it. Like these two—they’re super busy and really good, and I wouldn’t want to waste their time. T: Most decisions that affect us directly are brought up in the group chat.
I: (laughs) Yeah, that’s how we work together.
T: Sometimes in a not-so-timely manner, but most of the time, ahead of time.
I: (laughs) I used to be like, “Oh, we have a gig tomorrow.” One time Terry got mad at me cause I didn’t tell everyone the details, because I’m not good with the management side—but I’m getting better at that.

Is it hard to manage such a large group?

I: Managing the band is very, very difficult; they make my job really easy in a lot of ways. There’s not a lot of ego, which is great. As far as everyone bringing in their own sound, I’m trying to encourage more individuality. There are two types of musicians: the creator, and people whose musicianship is a craft. They [the latter] can play the instrument, kind of like carpentry—if you give someone the schematics of the bookshelf, exactly like it’s on the paper. One is not better than the other, but one usually needs the other. A lot of the members are the carpenters, who are really good at their craft, and then there are creators too—so I’m just trying to bring that out of them. For the album, I tried to get people to bring to the table their own ideas. I might have a motif, and then we jam off of that. 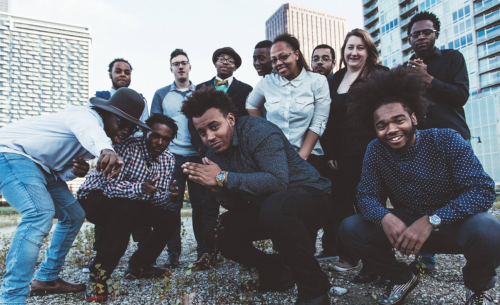 In regards to lyrics, do you each represent purely your own ideas? Or do you represent the ideas of the whole band as a collective?

I: The album is more of a collective, in terms of subjects, but for the EP though, I’ve been circling around the theme of the art and the artist and where God fits in in that. For me, it’s the art, and is there anything else here? I’m a Christian, but I don’t want to shove that down anyone’s throat—just to lead people down that journey of self-discovery and hope they get there. I do that by personal storytelling. With the next project, it’s going to be a lot more collaborative based, from the band [OBY], while the album is going to be, like, Oby.

How have you found the Chicago hip-hop scene to be inclusive or exclusive?
I: I wouldn’t even say we’re in the hip-hop scene, to be honest.
J: If you know how to make relationships with people, and get connected, it will be easy for you to get in. You just have to be out and around, the weekends, go to shows, introduce yourself, talk to the people, the bands, show your face a lot.
I: Definitely not part of the hip-hop scene. Maybe the “alternative live band hip-hop fusion” culture? At these shows, no one’s performing without a band. Psychedelic funk music, alt-rock, and OBY [are all] on a bill. That community is extremely supportive. I’m a nobody from Wisconsin. I would not be where I was without them. I’ve never booked a gig myself. Ever. All the gigs we’ve had have been promoters, which has been a blessing. But now I’m learning.
I: The scene is inclusive and exclusive. If you wanna be in the scene, just show up somewhere. Throw a rock. Whoever you hit, ask them where the next concert is at—see a show and talk to someone. And you’re already in it. But at the same time, I’m not in the metal scene, or the rock scene, or the punk scene. So if you ask me when the next experimental punk show was, I’d tell you to throw a rock somewhere else.

You also play in a lot of churches. Does that influence how you work with each other?

J: Once you’re in church music you’re good at knowing where to go, not just listening to another person.
T: We can use it as a reference point. It’s the basis of improv: you have to know what’s going on around you. That’s already in our minds. It’s much easier for us to communicate during shows if anything changes.

So, do you play for churches on the South Side?

And who are some of your mentors?

I: Sidewalk Chalk [an internationally renowned hip hop fusion band, also from Chicago] is a big mentor for us. Charlie, the piano player from Sidewalk Chalk, a faculty member at Columbia, has taken us under his wing. Oby is a student run class here—it’s a credit. School pays for studio sessions and management and such. So the school is also a mentor in a lot of ways.

Does it help that you all have gotten your start at a college like Columbia?

J: I think it helped in a way. I say that because in Columbia you get a whole bunch of connections. It would’ve been a lot harder to book shows if we were just our own band.
T: Columbia’s a great platform to get us connections. A lot of our shows now are not even Columbia based. We definitely have a lot of promoters just seeking us.
I: But at the same time, it’s easy to get stuck here and never leave. There was a time where I decided, “No more Columbia gigs!” But I’m really glad that we didn’t move from the Columbia scene to the Chicago scene before we did, because we weren’t ready. Now we’re way ready. But it’s different here, like writing a research paper in class versus writing about something and trying to get published. It’s very, very different.

Are you looking to get signed?

I: I think it depends. It depends on the offer. As a band, we do everything by ear. If it works, it works; if it doesn’t, it doesn’t. If it’s an ideal deal.

So, what do you see as the future of OBY?

J: This album will put us more out there, so we’ll get more connections. So we can grow. And make money, and make a living. That’s what I see right now after this album.
I: I’d say see as far as it can go. If we’re all friends. Since I’m Isaiah Oby, OBY can never die because I’m not dead. If for some reason everybody peaces out, that’s okay. We’re all friends though and we’ll always be playing with each other. If it works, it works; if it doesn’t, it doesn’t.
T: I feel as though we have a good potential to be great. If we keep doing what we’re doing, some opportunities will open up. And we can have an opportunity to show ourselves and be great. ¬

You can find OBY and their music online at obyofficial.bandcamp.com and obyofficial.com. They will also be performing at Reggies on May 11.