On April 27, after an anguished month of seeking answers in vain, the family of Anthony Alvarez learned details about what happened on March 31 when a Chicago police officer fatally shot the twenty-two-year-old. They met with representatives of the Civilian Office of Police Accountability (COPA) who showed them body camera footage of the incident. On April 28, COPA publicly released video and CPD reports about the shooting. The footage confirmed accounts told to the Weekly and the Invisible Institute by sources close to the investigation, who said the video showed police shot Alvarez in the back as he fled.

The Alvarez case has been largely eclipsed by the police killing two days earlier of thirteen-year-old Adam Toledo, an incident that commanded national attention. That may change after COPA’s release of the video from their investigation into Alvarez’s death, as it proves to be every bit as troubling as the footage of Adam’s killing.

On the evening of April 23, at the corner of North Laramie Avenue and West Eddy Street on Chicago’s Northwest Side, Alvarez’s family and friends gathered for a vigil. Many contributed to a memorial by carefully laying bouquets of flowers, lighting candles, and planting crosses in the grass beneath a one-way sign near the site of the shooting.

As the community gathered, some wearing t-shirts bearing Anthony’s picture, the memorial grew from a few prayer candles into a poignant display of grief. It was a grave and solemn occasion. Family members stood quietly, contemplating the flowers and flickering candles as if in church, while traffic streamed by on Laramie and occasional motorists sounded their horns in solidarity. 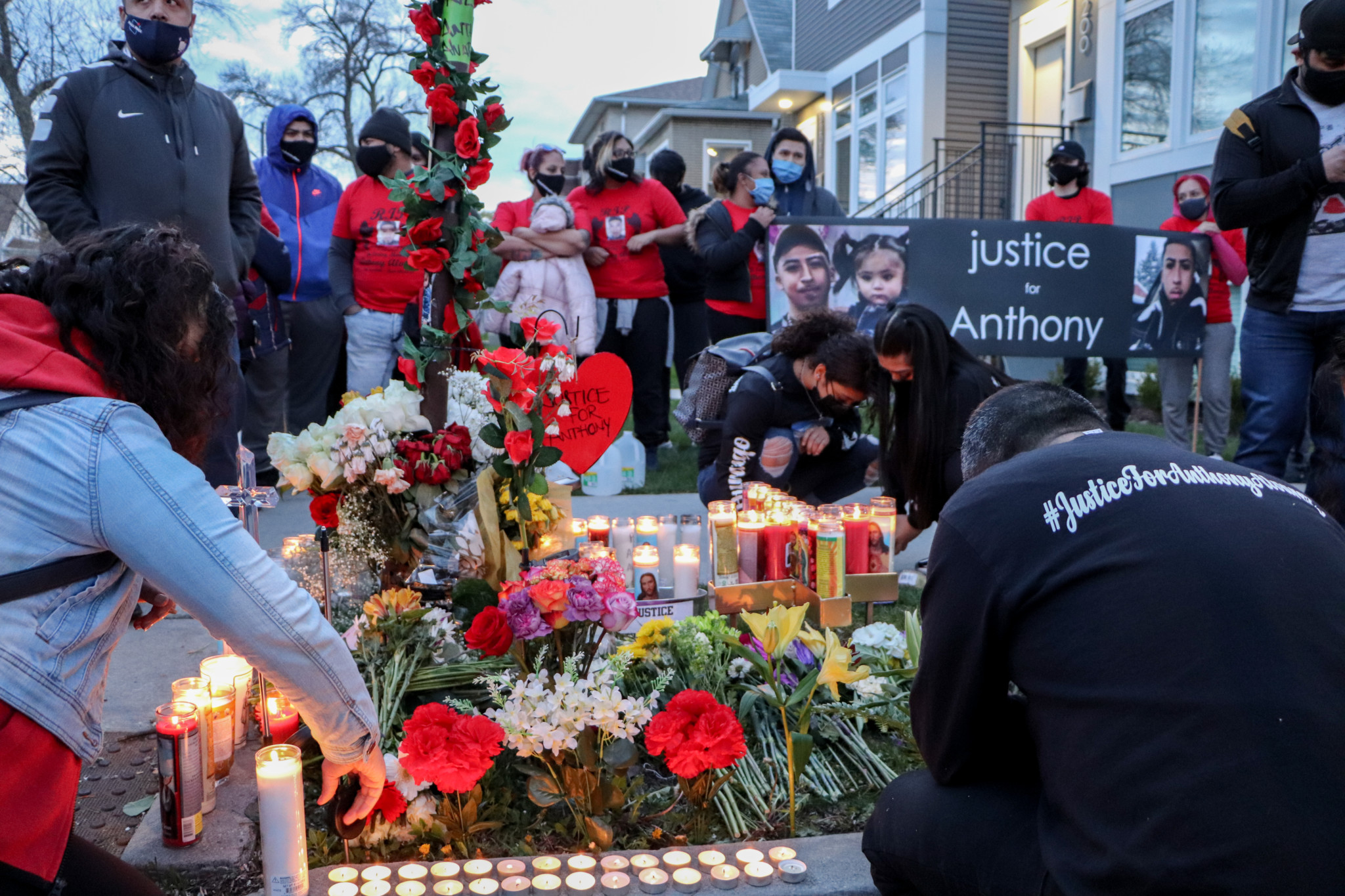 It was the second memorial the family had built on this spot. They created the first during a vigil on April 1, the day after Alvarez was killed. After that event concluded, a resident recorded a police officer dismantling the carefully constructed memorial. On the video, an officer can be seen picking up the veladoras and tossing them into a nearby garbage can. “Come on, bro,” someone behind the camera says, “you can’t be doing that.”

As dusk fell on last week’s vigil, Roxana Figueroa, Anthony’s cousin, turned her attention to neighbors who had been watching the vigil through open windows and cracked doors. Her voice reverberated down the quiet, tree-lined street, begging anyone with information to come forward. 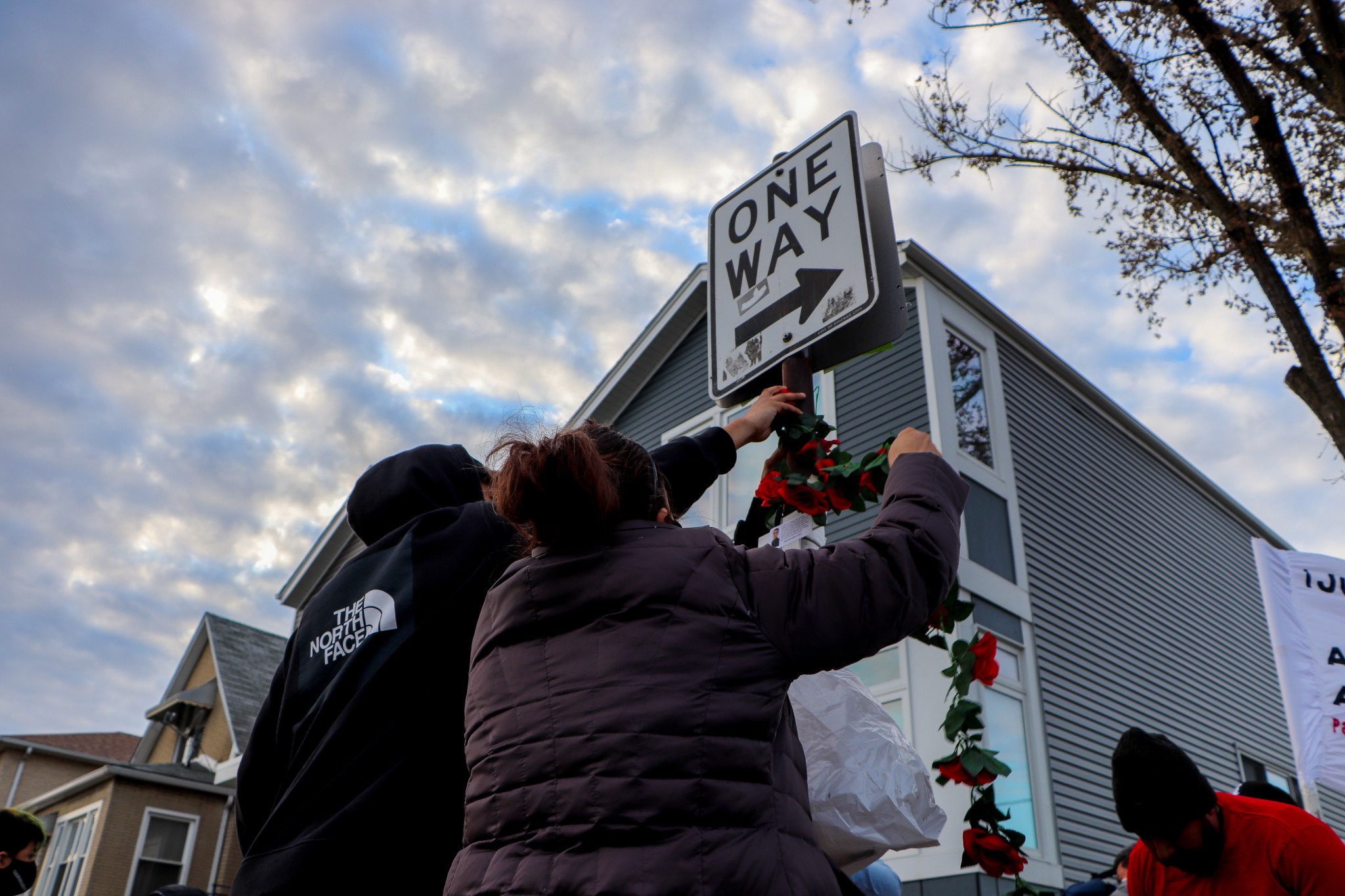 “I hope at night when you’re praying to God, God touches your heart to come forward and testify,” she said. “To help bring our family a little bit of peace and justice for Anthony Alvarez.”

According to Figueroa, the family has no more information today than the day Alvarez was killed.

When asked for comment, a spokesperson for CPD said that after the department issues a preliminary statement on a police-involved shooting, responsibility for the investigation of the incident falls to COPA.

“COPA remains sensitive to the grief of the Alvarez family and has worked with the family’s representative over the past few weeks to schedule a viewing of the materials related to the officer involved shooting of Mr. Alvarez,” Ephraim Eaddy of COPA wrote in a statement. “The family’s review and pending release of materials are but one of a series of actions that have and will take place over the course of our full and thorough investigation.”

When Anthony’s mother arrived at the crime scene on April 1 looking for answers, police turned her away, Figueroa said at a press conference on April 3.

“I’m supposed to feel protected by you guys,” she recounted his mother saying. “I’m supposed to get answers from you guys.” According to Figueroa, an officer responded, “we’re here to kick out people like you.”

CPD has released little information about the shooting. What information they have provided is in the form of a press release posted to Twitter by Tom Ahern, CPD’s deputy director of news affairs and communications. The night of Anthony’s death, the CPD press release states, officers engaged in a foot pursuit during which “the offender produced a handgun which led to confrontation with police.” An officer then discharged his weapon, fatally shooting Anthony just two blocks from where he lived.

He was pronounced dead from multiple gunshot wounds at 1:13 a.m. at Advocate Illinois Masonic Medical Center, according to the Cook County Medical Examiner.

It remains unclear why the officers stopped Alvarez in the first place. The CPD press release says nothing about what prompted the stop. What is clear is that when the officers sought to engage him, Alvarez ran away.

According to multiple sources close to the investigation, the relevant videos show two officers pursuing Alvarez on Laramie Avenue. As he runs, the young man has his cell phone in his left hand and what appears to be a gun in his right. At the intersection of Laramie and Eddy, he turns the corner. When officers round the corner, one of them fires multiple shots in quick succession at the young man’s back. Alvarez collapses in front of a house on the 5200 block of West Eddy.

“Why are you shooting me?” he asks the officer.

“Because you had a gun,” the officer replies.

The question Anthony Alvarez asked with his last breath demands a better answer. More than five years after revelations about the police murder of Laquan McDonald initiated an era of supposedly urgent police reform, Chicago is descending into a deepening crisis of the civil order. The Alvarez incident, following closely on the Toledo killing, has illuminated the extent of the city’s failure to make progress on the police reform agenda that has clearly and repeatedly been articulated. 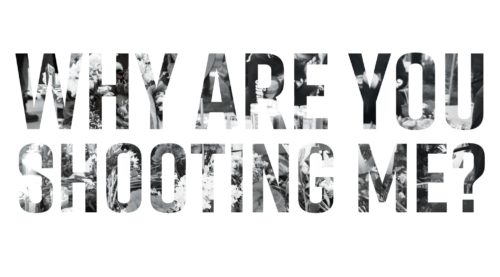 At an April 5 news briefing on the Adam Toledo police shooting, Mayor Lori Lightfoot announced that she had directed CPD to put in place a foot pursuit policy by summer. She sternly chastised others for their failure to institute such a policy long ago.

“We cannot and will not push the foot pursuit reform off for another day,” she said. “No longer can we afford to put off to tomorrow what we can address today, because lives are truly at stake.”

That strong, clear statement has a context worth examining.

In 2016, the report of the Police Accountability Task Force, chaired by Lightfoot, stated that “troubling practices” such as shooting “at the backs of fleeing suspects” made clear the pressing need for “a fundamental rethinking of the current use-of-force policies.”

In an investigation of the CPD published in 2017, the U.S. Department of Justice found that CPD engages in a pattern and practice of unconstitutional use of force, including deadly force, that disproportionately impacts communities of color. The report stated that “officers engage in tactically unsound and unnecessary foot pursuits, and that these foot pursuits too often end with officers unreasonably shooting someone—including unarmed individuals.”

“In some cases,” the DOJ reported, “CPD officers initiated foot pursuits without a basis for believing the person had committed a serious crime. In these cases, the act of fleeing alone was sufficient to trigger a pursuit ending in gunfire, sometimes fatal.”

Having successfully pivoted and rebranded herself as a change agent in large part on the strength of her role as chair of the Police Accountability Task Force, Lightfoot became mayor of Chicago in 2019. Since she has been in office, her interim police superintendent and the police monitor who audits CPD compliance with the federal consent decree have both echoed the recommendation that CPD establish a foot pursuit policy.

That was the context when Lightfoot took the lectern, after years of failure to address the problem, to announce with an air of decisive leadership that she had directed CPD to develop a foot pursuit policy.

Hidden to the public was another critical dimension of the context in which she spoke that day: the troubling specifics of the Alvarez shooting five days earlier. As the mayor expressed her personal sympathy for the mother of Adam Toledo at the press conference, another grieving family was suffering in the dark, unable to get anyone in city government to respond to their questions about what had happened to their loved one at the hands of the police.

Note: This story was edited after publication to include information about the public release of the video by COPA on April 28, 2021.

Madison Muller is a graduate student of social justice journalism at Northwestern University. She last reported on disparities in media coverage of mass shootings. Jamie Kalven is an author and journalist based in Chicago. He is the founder of the Invisible Institute and was awarded the 2017 Hillman Prize for Web Journalism for “Code of Silence,” written for The Intercept