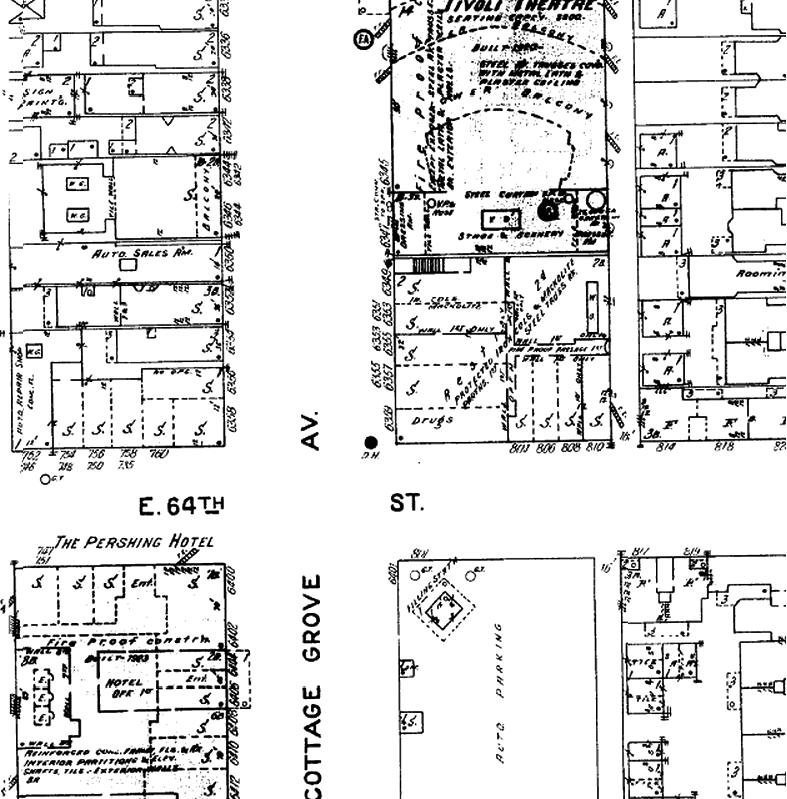 Just a block south of the 63rd and Cottage Grove Green Line, on the northeast corner of the intersection, sits a squat two-story building. Its facade of light stone is punctuated by decorative maroon bricks and sets of three arched windows framed with golden wood. Though not imposing, the building quietly calls attention to itself with its combination of textures and mesmerizing repetition of small shapes. It begs the viewer to stand and consider it, or perhaps to run a hand over the curls of the putti in its carved stone molding.

This is the Grand Ballroom, previously known as the Frank Loeffler Building. In November 1923, Loeffler purchased the lot’s previous building, a double storefront with tenements in the rear, from the notoriously corrupt former-mayor William Hale “Big Bill” Thompson for $150,000. Loeffler had that building demolished and constructed the Frank Loeffler Building, the two-story Renaissance Revival structure that remains there. Its current occupants include JB One, a carry-out restaurant; Teazze Salon; and the office of 20th Ward Alderman Willie Cochran.

In the Jazz Age years after it was built, the Loeffler Building was neighbored by the 3,200-seat Tivoli Theatre movie palace and the seven-story Pershing Hotel. The Loeffler, in its heyday, was home to the largest beauty parlor in Chicago and the Chinese-owned Cinderella Cafe, a thousand-seat space whose central feature was an enormous crystal slipper suspended from the ceiling above the dance floor.

As Chicago’s Black Belt expanded in the 1940s, white residents moved out of this pocket of Woodlawn, and its hotels and ballrooms began their second lives as hubs of the South Side’s African-American jazz and social scenes. The Loeffler Building became known as the Grand Ballroom, and hosted lavish pageants, dances, and fundraisers for sit-in protests. The Pershing Hotel became black-owned in 1943, and would go on to host countless artists, including Earl Hines, Ahmad Jamal, and Charlie Parker, in its ballroom through the 1950s and 1960s.

Before that, however, the Pershing was the site of a bitter conflict over issues of housing and segregation during World War II. The U.S. Army had planned for a number of redistribution centers for returning overseas veterans. Under this program, dozens of hotels and other buildings across the country were vacated in order to provide temporary housing for soldiers returning from abroad. The soldiers were to be given the opportunity to rest for a few weeks, sometimes in the company of their wives, before returning to combat.

African-American community leaders denounced the plans to seize the Pershing on several grounds. In October 1944, the Chicago Defender reported that the Army intended to keep the centers segregated, which community leaders decried as a Jim Crow program that would almost certainly lead to inferior care and amenities for African-American veterans. Some objected to the repurposing of the Pershing at all, in light of “a critical civilian housing need” that the building met as a residential hotel. This concern highlights the hardship of housing scarcity that plagued the city’s African-American community in the era when racially restrictive covenants still limited the areas in which they could live. 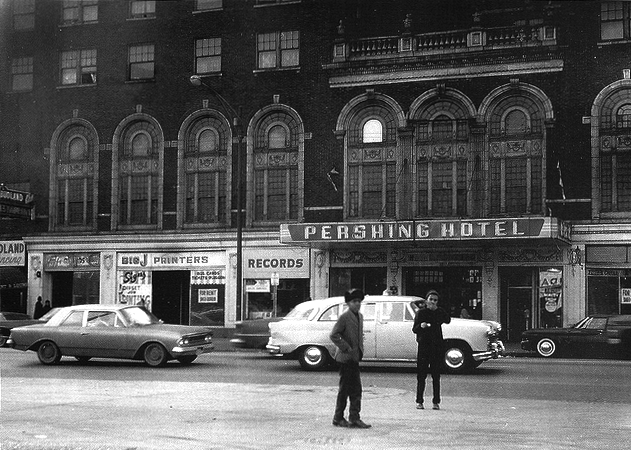 An all-star delegation of leaders— Walter White, secretary of the NAACP; Channing Tobias, secretary of Negro work for the YMCA; and Mary McLeod Bethune, president of the National Council of Negro Women—expressed their opposition in an in-person meeting with President Roosevelt. While the Army did initially seize the hotel, they soon abandoned the plan, and the African-American troops left after a single month. The local community celebrated this change of plans as a victory over Jim Crow.

By the mid-1960s, the Pershing had undergone countless changes in ownership (writer Lorraine Hansberry and her family owned it briefly in the early 1960s) and was falling into disrepair. In 1974, the Defender called it “an eyesore in the Woodlawn community.” The Pershing Hotel was demolished in the 1980s and remains an overgrown vacant lot. The Tivoli Theatre closed in the mid-1960s and a Family Dollar store now occupies the site.

The Grand Ballroom is now the lone indication of 64th and Cottage Grove’s Jazz Age history. It has seen the fortunes of the neighborhood rise and fall around it, and its own fortunes experienced an upturn in 2003, when developer Andy Schcolnik acquired the building. He began a restoration project in partnership with now-defunct ShoreBank, a community-development bank established in the 1970s to fight racist redlining practices on the South Side. The Ballroom is now fully restored and open as a concert hall and private event space, according to its website. Comparing the fates of the Pershing and the Grand Ballroom is a reminder of the fragile contingencies of historical preservation. While we might like to think otherwise, the distance between pristine restoration and the wrecking ball is often nothing more than a question of which gets there first.