Shamar Hemphill is a senior organizer at the Inner-City Muslim Action Network (IMAN), a community organization based in Chicago Lawn. An Englewood native and Hyde Park resident, Hemphill has been working for IMAN for the past decade. IMAN’s work encompasses a dizzying array of initiatives—among them, a fully-staffed health center for low-income residents, weekly farmers markets and bimonthly open mics for youth, a “green reentry” program that trains recently incarcerated men in environmentally friendly construction skills, a summer music and arts festival, and lobbying for parole reform.

Here, Hemphill talks about IMAN’s mission, and its flagship Muslim-Run Corner Store Campaign. The initiative brings together Chicago Lawn’s Muslim and Arab store owners with its Black residents, to engage in conversation over prejudice between the groups and work together to bring fresh, healthy produce to the neighborhood.

I came from a strong single-parent background. Although my father was in my life, my mother was the real rock and figurehead, who stabilized four children—I was the youngest. Our home was really a smaller version of a Jane Adams Hull House. When you think about latchkey kids and folks looking for refuge, young people, my mother always kept the door open. And when you think about the type of work in community organizing and civic institutions, for a lot of us it starts with our mother. When we look at our mom going above and beyond, that is where the spark comes from.

IMAN has been around twenty years; our mission statement is, we foster health, wellness, and healing in the inner city, by organizing for social change, cultivating the arts, and operating a holistic health center.

Our advocacy work, our social justice arm, it’s the vein of IMAN. Our flagship campaign [is] our corner store campaign—we literally have over sixty stores in our cohort where we’re mobilizing both Arab storeowners and African-American residents to see their collective stake in working together, to [create] a food ecosystem that begins to inspire and shift the culture around the way we see food, right, in relationship with this whole idea of a food desert. IMAN has been able to take the corner stores as spaces [to] train store owners to create a whole radical reimagining of what the corner stores can become, sites of greater transformation for the community, to inspire [residents] to have more nutritious products in their store, to eat more nutritiously, to begin to think about space as an altering factor.

We’ve initiated what we call “green zones” into the stores, where there’s healthy sections in the store that the storeowners begin to market. There’s signage, there’s leaders, people training every day to encourage residents to purchase from the green zones, planted right in front of the stores so people can see it. Again, that’s part of the shift in culture, in the way the store operates, the training, the layout, the price points.

[We have] our weekly Grassroots Power hour Session, a forum in Chicago Lawn where residents—Latinos, African Americans, students from Maria High School, from Hubbard, from Kelly High School, from the Arab community, from the Desi community—[come] into our space to begin to see their collective stake, their stories coming together. That’s how we traditionally do our organizing work, connecting to stories. It helps to see how we can have this collective stake around these messy issues that we oftentimes don’t really get the chance to think about. Nobody begins to break them down, how it happens in neighborhoods like Chicago Lawn, where people are pitted against each other. How can you not be pitted against each other? Right? When you’re having to work across these intersections of overlooked, unsaturated, marginalized sets of communities, especially on the South Side of Chicago.

Our work has always been to tackle this notion of deep-seated segregation and racism in Chicago. And really working to mobilize communities to pass the horrors of these invisible barriers, and to have people see this community as their community.

Food insecurity is a very serious issue, but you’re not going to deal with food insecurity if you don’t really change the environment as well. For us, we’ve been having to deal with this for a while, having to solve issues of racial tensions from storeowners just coming in with no business model and [who] at the same time, don’t know anything about the community, just planted right in the midst of all this stuff. [It’s] what sociologists deem the “middle man minority,” [that] ends up in community of color that is not from the community. [And] the patrons, the community residents know nothing about the storeowners.

If we were going to work on any issue, it was going to be this one, because it derives right in our backyard, it’s the DNA. Even our prophet Muhammad dealt with this, getting people to see their collective stake. For us, we knew that we had to begin to develop this idea of a serious healing of racial tension, that allows storeowners and residents to begin to see their stories as interconnected and dealing with the same level of oppression. Because the storeowner didn’t create decimated blocks, right—over half the block is boarded up and there’s all these vacant lots, there’s no real economy there—the storeowners didn’t create that. But often, if you’re there, you’re going to get the finger pointed at you.

At the same time the storeowners have to understand that, you know, these communities that are poor working-class folks aren’t lazy, they’re not just making these decisions, they ain’t just start eating like this. There [were] deliberate shifts. So we knew we had to heal that tension, we had to bring those two parties together.

This little Italian pizza parlor on 59th has been a Gage Park staple since 1980. Built for takeout, the restaurant has only a few small tables and a window where you can order your pizza thin, thick, deep-dish, or stuffed; pick a large, and you’ll get a free liter of soda. The spinach deep-dish pizza (perhaps an uninspired choice by this halal-keeping writer) is thoroughly satisfying, with a slightly sweet sauce, a hefty helping of stretchy (they call it “gooey”) cheese, and a crunchy-on-the-outside-soft-on-the-inside crust. For the meat-eaters out there, Geneo’s Special has all the goods—sausage, onion, mushroom, green peppers, pepperoni, olives, and Canadian bacon.

Stop by any day of the week, or keep Geneo’s in mind come February, when the restaurant offers personalized, heart-shaped pizzas. (Hafsa Razi) 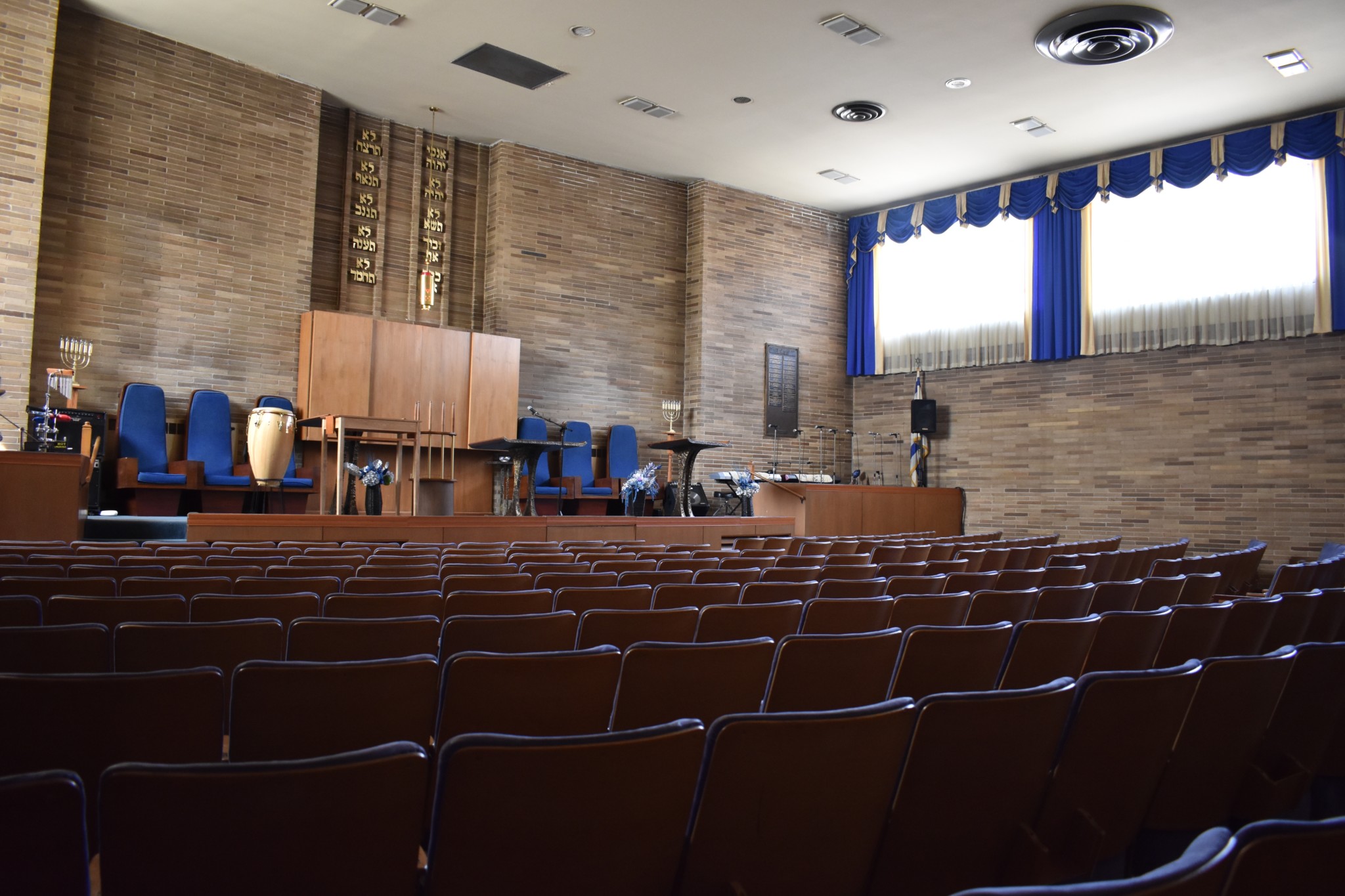 Beth Shalom B’nai Zaken (BSBZ) is the only synagogue on the South Side located outside of Hyde Park. Founded in 1915 as the Ethiopian Hebrew Association, it underwent many changes in leadership before merging with the Beth Shalom Hebrew Congregation in 1984, and then merging with the B’nai Zaken Congregation in 1993 to assume its present-day form. Its Chief Rabbi, Capers Funnye Jr., is the head of the International Israelite Board of Rabbis, representing Black Jews in the North America, the Caribbean, and multiple African countries including South Africa and Uganda; he’s also the first Black member of the Chicago Board of Rabbis. BSBZ’s close-knit congregation is an integral part of Marquette Park, holding events like a health fair this summer for the surrounding community. Once a month (when it does not conflict with a Bar or Bat Mitzvah), BSBZ holds a “family and friends Shabbat” open to non-members—a great opportunity to engage with this friendly and open Jewish community, as I’ve done often. After Saturday morning services, take a Shabbat stroll to the park after which the neighborhood is named. The Dr. Martin Luther King, Jr. Living Memorial just a block and a half south provides a meaningful opportunity to reflect upon Dr. King’s efforts to achieve racial integration and fair housing in Chicago (and the violent white backlash he faced here). If anything is to restore your hope in the idea of the caring, integrated, and loving community that Dr. King envisioned, it is Beth Shalom B’nai Zaken Ethiopian Hebrew Congregation—a community rooted in a diverse and inclusive Jewish tradition. (Jacob Rosenblum)

Nativity of the Blessed Virgin Mary

Everywhere you turn inside the Nativity of the Blessed Virgin Mary church, there’s something new to see. The building, designed by Jonas Mulokas and built in 1957, evokes Lithuanian folk and Baroque architecture. The design itself is symmetrical, but every piece of iconography holds a different image, from the tall stained-glass window panels, to the ornate pillars and arches, to the murals on the right and left side altars, to the stone sculptures, to the mosaic portraits of saints and priests, to the series of numbered carved stone tablets depict the stages of the crucifixion. They all converge on the main altar, crowded by sweet-smelling bouquets of fresh flowers.

Recently, the apse of the church has been adorned with a “90” of flowers strung from the ceiling, marking the parish’s ninetieth anniversary. It’s a remnant of the church’s early September commemoration of Our Lady of Šiluva—the miraculous apparition of the Virgin Mary in a small Lithuanian village in the seventeenth century—in a devotional event that draws Lithuanian Americans from across the Chicago area. If you make your own pilgrimage to this old building, prepare to stay a while. (Hafsa Razi)

Latest from Best of the South Side 2017

Best of the Far Southeast Side 2017