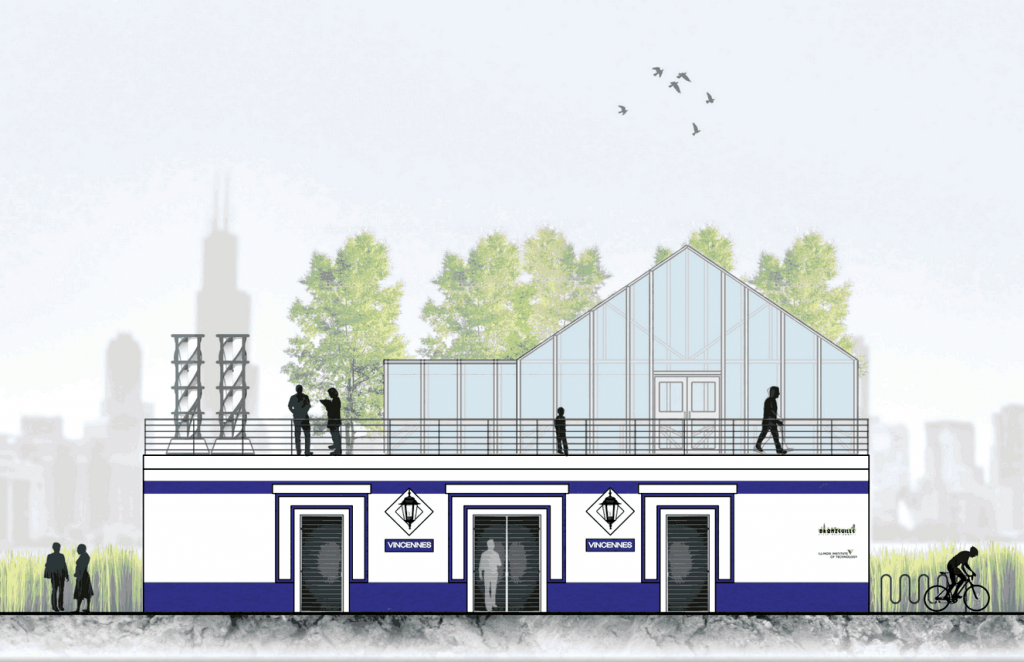 Walking down Oakwood Boulevard in Bronzeville, Danielle Kizaire-Sutton seems to know every house we pass. “That one’s just been renovated,” she says, pausing to cheerfully greet a passerby. “And the family in there helped organize the block party last year.” Finally, she reaches her destination—an abandoned Commonwealth Edison building situated near the corner of 40th Street and Langley Avenue, next to an abandoned railroad embankment that spans nearly seven acres and runs the length of Bronzeville’s 3rd Ward, butting into the 4th Ward at its eastern end.

“Look at that tile work,” Kizaire-Sutton says admiringly, adding that the inside looks even more beautiful. Though she does not yet own the building, Kizaire-Sutton, who, along with husband Charles Sutton, runs the Bronzeville Urban Development nonprofit, has long wanted to use it as a center for environmental education in conjunction with BUD’s bigger plan: to put solar panels, greenhouses, and a mushroom farm on the railroad embankment, creating a hub for locally grown, sustainable, urban agriculture in one of Chicago’s poorest areas.

Like much else about the project, though, acquiring the building has its costs. ComEd refuses to tear down and sell the space until BUD has paid for the cleanup. Not only is BUD opposed to this course of action on principle—their stance, essentially, is that the energy company should clean up its own mess—it also lacks the money to actually clean up the space.

Kizaire-Sutton and her husband first began to contemplate the embankment project about fourteen years ago, though it took them until 2009 to track down the owner of the property. The owner of the embankment lot—whom Kizaire-Sutton wouldn’t name because of potential issues with back taxes—had acquired it in the Conrail bankruptcy proceedings, and sold it to them for one dollar, though the couple still owes around $50,000 in back taxes.

Then, in 2011, at a conference for environmental law and policy, Kizaire-Sutton managed to speak briefly with Susan Hedman, an Environmental Protection Agency administrator for the Great Lakes region, which serves six states in the Midwest, including Illinois. Within days, the EPA had given them a $145,000 grant and sent a team out to assess the area. Though the team used all of the grant to begin an ecological risk assessment, Kizaire-Sutton is hopeful that BUD can get $200,000 to $300,000 more from the EPA next year, to help them fund the removal of brush on top of the embankment.

Once the EPA confirmed that BUD had passed the risk assessment, the organization began to work with Interprofessional Projects Program (IPRO), a program of Illinois Institute of Technology that match es students with real-world projects. As a cheap way to get both man power and design services, the IPRO doesn’t seem like a bad idea: the engineering and architecture students from IIT have not only begun to clear off some of the vegetation from the embankment, but have also designed greenhouses and viaducts, begun to check the soil for contaminants, and created a land-use plan—complete with intricate models of the finished project. According to Blake Davis, an adjunct professor of sustainability and urban agriculture at IIT, who worked on the project, BUD was one of the most dedicated organizations he’s partnered with. “They took a very hands-on approach, and came to almost every class,” he says.

BUD plans to focus on developing aquaponics—the practice of growing plants and animals symbiotically in an aquatic environment—within its greenhouses. It hopes to produce enough fruits and vegetables to eventually create a sustainable workers’ cooperative within the community. Kizaire-Sutton wants to model this workers’ co-op on the Evergreen Cooperative in Cleveland, where workers are encouraged to buy into the cooperative after an initial apprenticeship period, creating an incentive for investment in both the community and the organization.

BUD says it wouldn’t discriminate against non-violent criminals when hiring, creating a space where ex-convicts can return to work. In addition, the entire southern wall of the embankment would be covered with solar panels, and Kizaire-Sutton wants to find a way to harness wind power. There are other, more far-fetched ideas as well: she mentions the possibility of growing filbert trees using geothermal power, from which truffles can be cultivated and harvested. Kizaire-Sutton also wants to have mural competitions along the entire length of the embankment.

The enterprise would also give BUD the opportunity to provide supplementary education to local community members, which Kizaire-Sutton sees as a way of combating neighborhood violence. “We can occupy children who right now are resorting to violence because they have nothing else to do,” she says.

BUD is attempting to wring every possible project it can out of the space it’s been given. Along with the workers’ cooperative, Kizaire-Sutton wants to institute a farmers’ market that would sell the locally grown fruits and vegetables to Bronzeville residents on a sliding scale. In this way, BUD sees itself as fighting the encroachment of larger companies, like Walmart, that have increasingly been moving into the neighborhood in a manner that Kizaire-Sutton, who has lived in Bronzeville for all of her sixty-seven years, calls “raping and pillaging.” Of BUD, on the other hand, Davis says, “This could easily be a project divorced from the community, but they’ve been very sensitive about making sure nothing impinges on the people from the community.”

Other factors have taken a toll on the organization. Both Kizaire-Sutton and her husband lost their jobs and house following the economic downturn, and they now live off Social Security in a Washington Park senior citizens’ home (Kizaire-Sutton maintains it’s still part of Bronzeville). They are struggling to pay $1,800 in attorneys’ fees, and by press time their fundraising effort on the website Crowdrise has raised only $240 of its $35,000 goal—money that would be used to retain their attorneys to help set up the cooperatives.

In general, financing the project is a major issue for BUD; an energy company they brought in gave them an estimate of $60 million for the full scope of their plans, though an independent assessor, in a separate estimate, later said that price would only be around $3 million. Another option Kizaire-Sutton floated during the course of our conversation was the development of just one section of the embankment first; though she was unsure of the exact price, she hopes that the revenue from selling the crops produced on part of the property could be used to develop the rest of the area. While almost any figure might seem too much for the organization, they’re still exploring several avenues of potential funding. One of the more promising right now is the University of Chicago, where they’ve met with Wendy Walker-Williams, executive director of the South East Chicago Commission, who, according to Kizaire-Sutton, seemed very excited about the project. (Their second meeting took place last Friday.)

This would appear to be a mutually beneficial transaction—BUD would receive funding for its project, and the UofC would make some headway in rehabilitating its image on the South Side. Kizaire-Sutton proposes that the UofC could then function as a sort of “anchor institution” for the project, providing financial support in return for fruits, vegetables, and other products that would be grown there. Another potential financial source is TIF money; BUD has an early-June meeting with Alderman Pat Dowell, of the 3rd Ward, about securing funding from the city. Kizaire-Sutton will also be traveling to San Francisco in late August, where she has been invited to give a presentation to the Commonwealth Club, a Silicon Valley nonprofit with over 16,000 members.

Meanwhile, back at the ComEd building, Kizaire-Sutton is still trying to figure out how she can acquire the abandoned structure. She looks at a wall that her husband and a team of students painted last summer, now peeling and punched full of holes, while children run around on the sidewalk in front of a row of identical gray homes. “Imagine all these people, working right across from where they live,” she says, gesturing toward the embankment. Turning, she walks through the tall grass of the lot where she envisions the farmers’ market will be one day, to catch the #3 bus back home.

Up-to-date information on how to keep yourself and others safe, and what lies ahead for Chicago

A Document of the Conflict in Grant Park

When I Say Chicago

What Do You Mean When You Say Chicago?

What Does ‘Defund the Police’ Mean to You?

South Side organizers discuss defunding and abolition, and envision ways to reallocate resources to communities

By Jonathan Dale
Residents and activists discuss what legalizing accessory dwelling units could really mean for the fight over equitable and affordable housing
By David Zegeye
Spurred by love for her community, a young resident takes the plunge into activism amid chaos
By Grace Asiegbu
Centers for New Horizons
By Emeline Posner
Three new books examine the evolution of “labor” in Chicago through the twentieth century
By Sam Joyce
Go to Top