The 1893 World’s Columbian Exposition was a product of giddy enthusiasm. Charles Darwin had recently released “On the Origin of Species,” a groundbreaking book prompting its readers to reexamine the natural world around them. Electricity lit up the dark night like never before, and the telephone was newly facilitating quick and personal communication. Archaeologists, botanists, and sociologists were almost tripping over new findings, many of them in far-flung countries. The passenger pigeon still flitted from building to building in America’s growing metropolises. The Western world was unburdened, intact, and ready to show off, an enthusiasm that manifested itself in the fair erected in Jackson Park and along the Hyde Park Midway.

The Field Museum has opened its vaults for its most recent exhibition, “Wonders of the 1893 World’s Fair.” The museum was originally established in order to be the final home for many of the World’s Fair exhibitions after the fair itself ended. Many of the items currently on view have not been put on display since the fair, which makes walking through the exhibit feel like something akin to time travel. It is apparent that many of the displays are from a bygone era. Objects such as a piece of wood from a Japanese tree, simplistic in our age of global travel, were likely incredibly fascinating to the fair’s attendees, many of whom were just then learning of the particularities of countries and cultures outside of their own. Lions, leopards, and seals were stuffed for exhibition as evidence of the inconceivable fauna that existed beyond American borders. The fair was lit entirely with electrical light bulbs powered by alternating electrical current, pioneering technology and a source of pride for the fair’s organizers. The clunky metal switch that powered that maze of electrical lights is now in a glass case at the Field Museum. 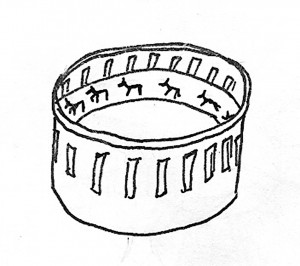 In 1893 the Chicago Tribune wrote, “It is a World’s Fair as far as its…exhibits are concerned. It is a Chicago Fair as far as energy…and determination are concerned…Chicago deserves the credit.” Beating out New York, St. Louis, and Washington D.C. for the opportunity to host the exhibition, Chicago threw everything it had into the production of the fair. Its organizers and department heads became so renowned for their work that they worked as the Field Museum’s first curators in the years after the fair. Twenty-five million people visited the fair between May 1 and October 30, 1893, almost forty percent of the country’s population at the time. Organizers recommended allotting two weeks to go to the fair because of the extent of the exhibitions on view. And literally everything was for sale; fossils that the Field Museum now has in their collections were priced between $2 and $5. Artifacts seemed so abundant at the time that the whole fair was set up as a trade show from which the exhibition items themselves were purchased as souvenirs.

In addition, many exhibition items were judged and awarded prizes accordingly, one of the most famous winners being Pabst Blue Ribbon beer. It was within this framework that fairgoers felt comfortable walking through the “villages” of the Japanese, Javanese, Dahomey, and Inuit that were set up along the Midway and evaluating the level of their civility. Anthropologists today are still working to mend relationships between America and the cultures and peoples that were put on display at the fair.

The 1893 World’s Fair, as reanimated in the Field Museum’s present-day exhibition, was Chicago’s initiation into the national and global scene. The endless white buildings, the rare and fascinating global artifacts, and the cutting edge technology that held it all together made the fair into something extraordinary and worthy of revisiting. As the Field Museum puts it, “the fair brought the world to one place and showed that America—and Chicago—was open for business.”

A Case for Public Schools

Out in the Cold

Though its struggle for donations continues, Clara's Place marches on

Farms in the City

A Case for Public Schools

Out in the Cold

Though its struggle for donations continues, Clara's Place marches on

Farms in the City