Build Coffee—opened this summer by two former South Side Weekly editors—is a coffee shop and bookstore directly next door to the Weekly office in the Experimental Station. They stock a mix of used and new books, including a wall of mostly-local zines, chapbooks, comics, and artist books. The following pages, chosen with great neighborly affection, are excerpts from some of their favorite Chicago presses and artists on those shelves: Bigmouth Comix, Let It Sink, 7Vientos, Half Letter Press, Low Key Label, and Brown & Proud Press.

Let It Sink is a long-running zine by Jim Joyce, a writer from Morgan Park. These pages are excerpted from Let It Sink #6: dreamtigers. 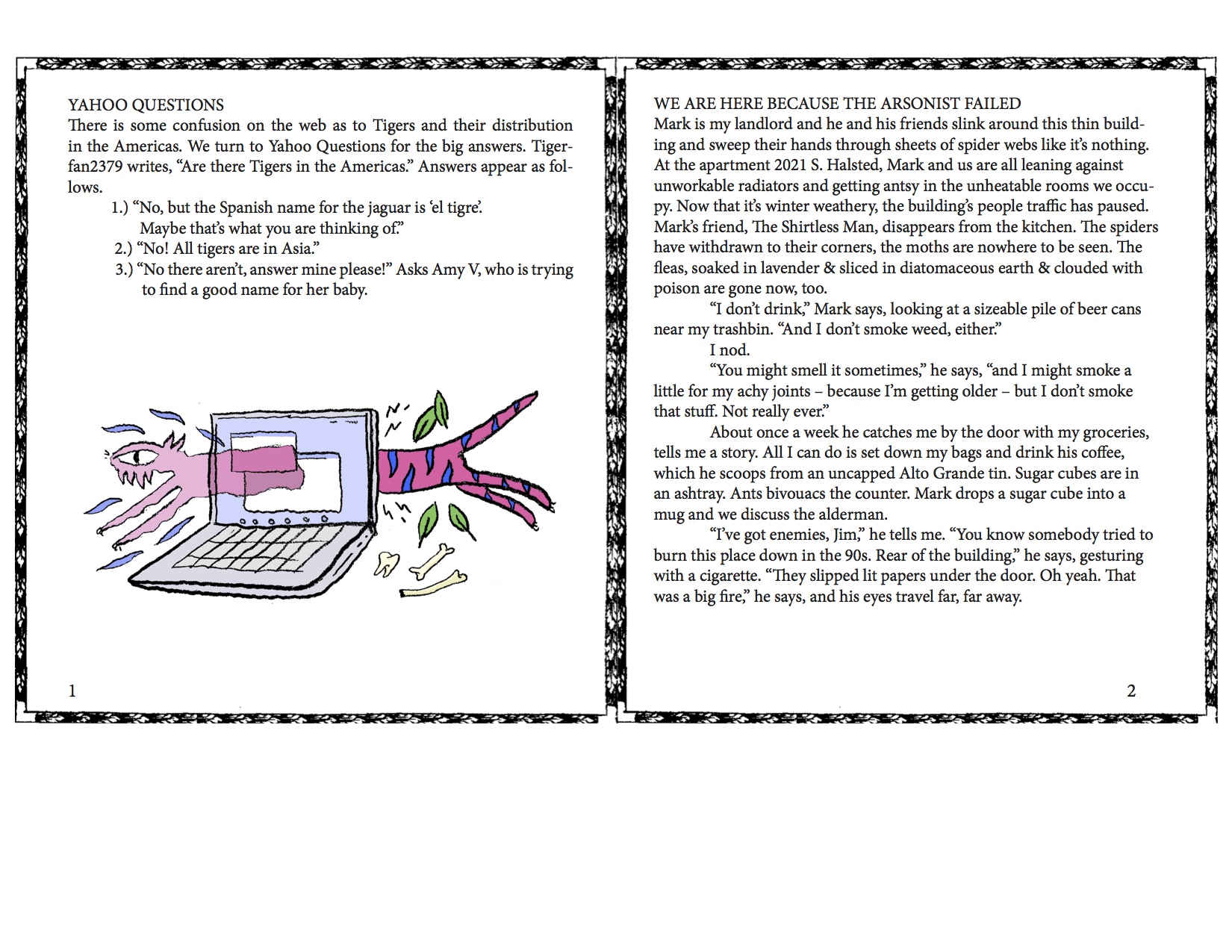 Bigmouth Comix is a distro featuring the work of femme and gender non-conforming artists from African, Middle East, Muslim, South Asian countries and their diaspora(s). These pages are excerpted from Kawtar Azzouzi’s All The White Boys That Broke My Heart. Azzouzi is a first-generation Moroccan artist living in Chicago. 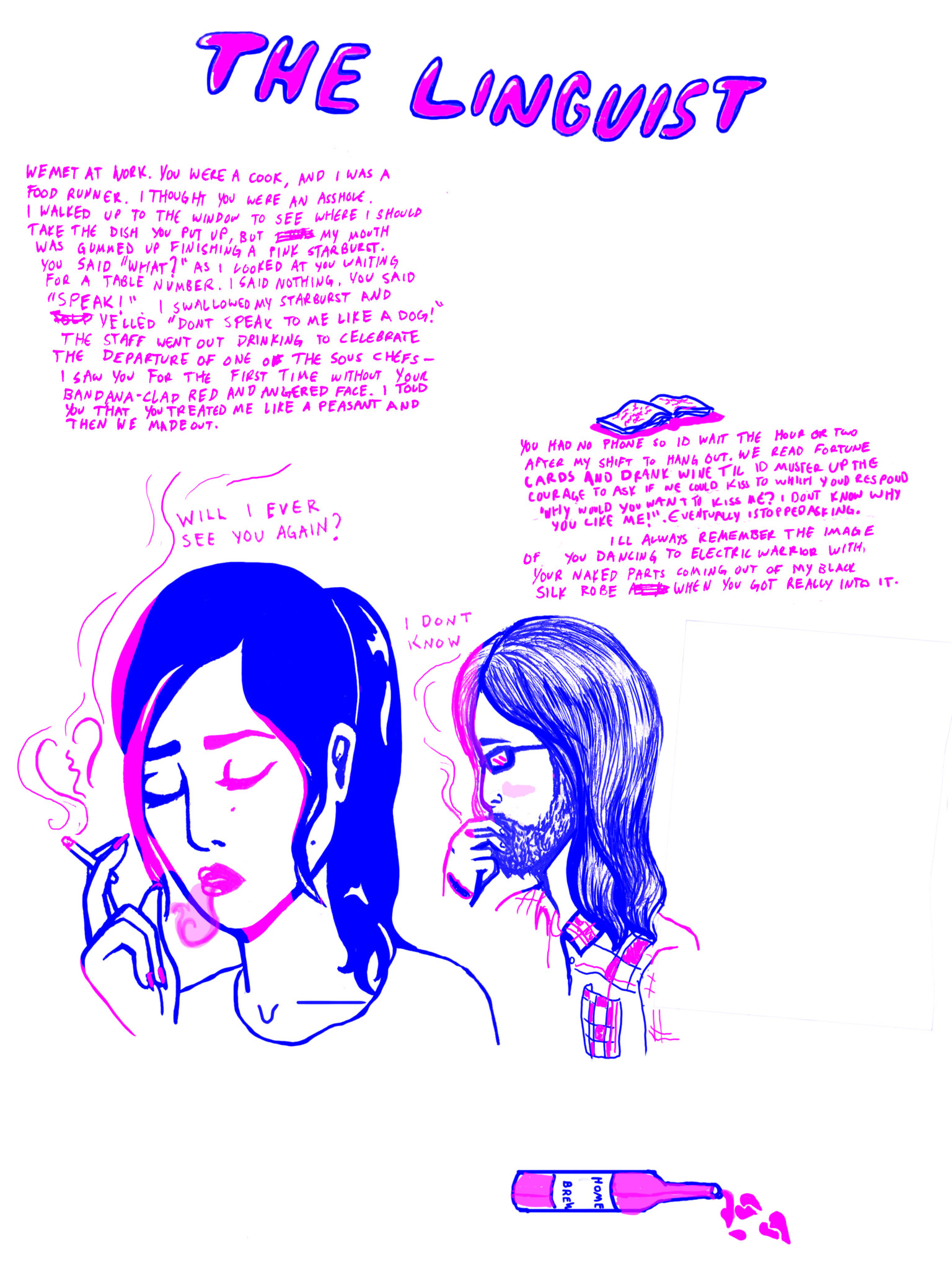 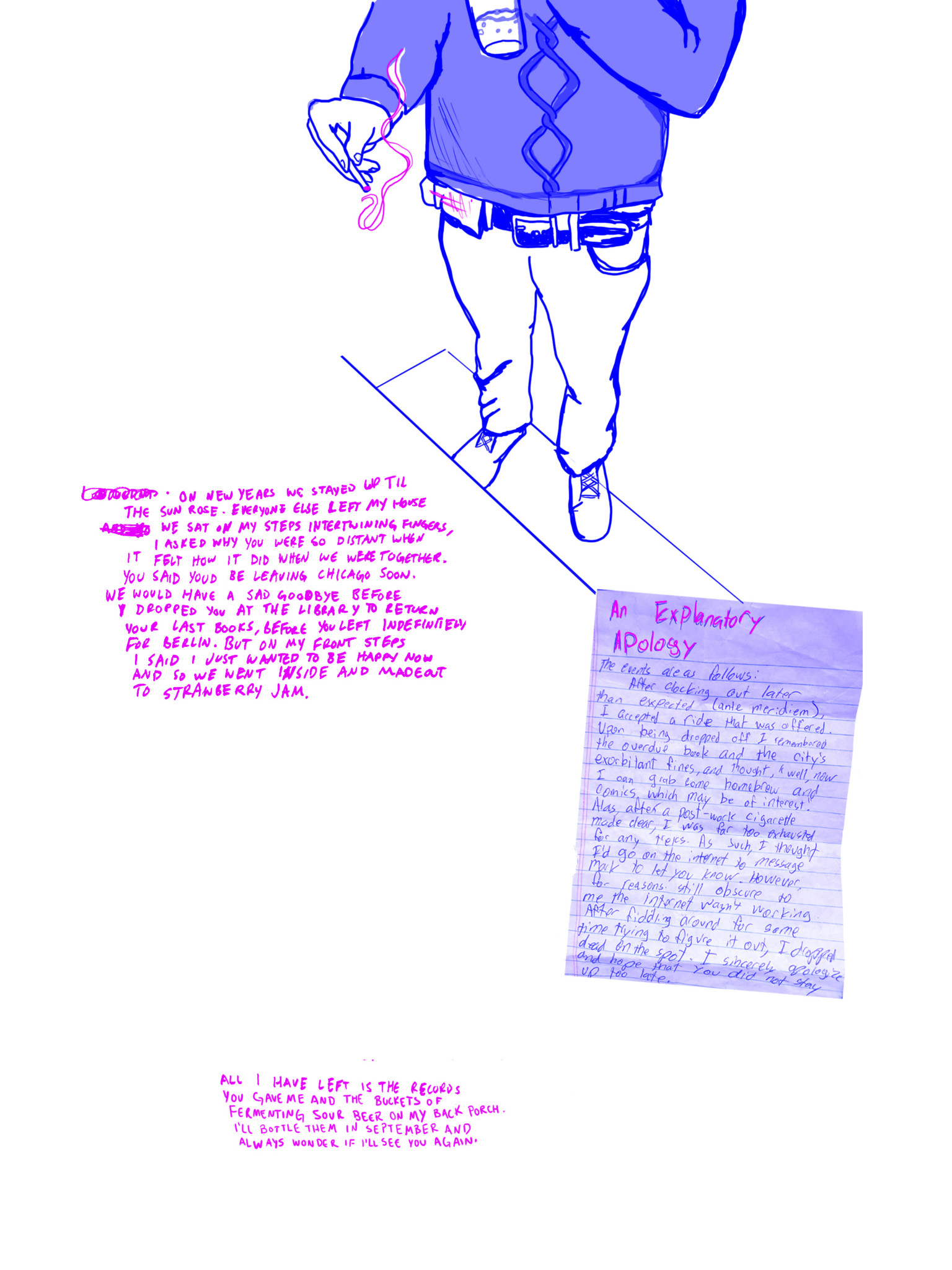 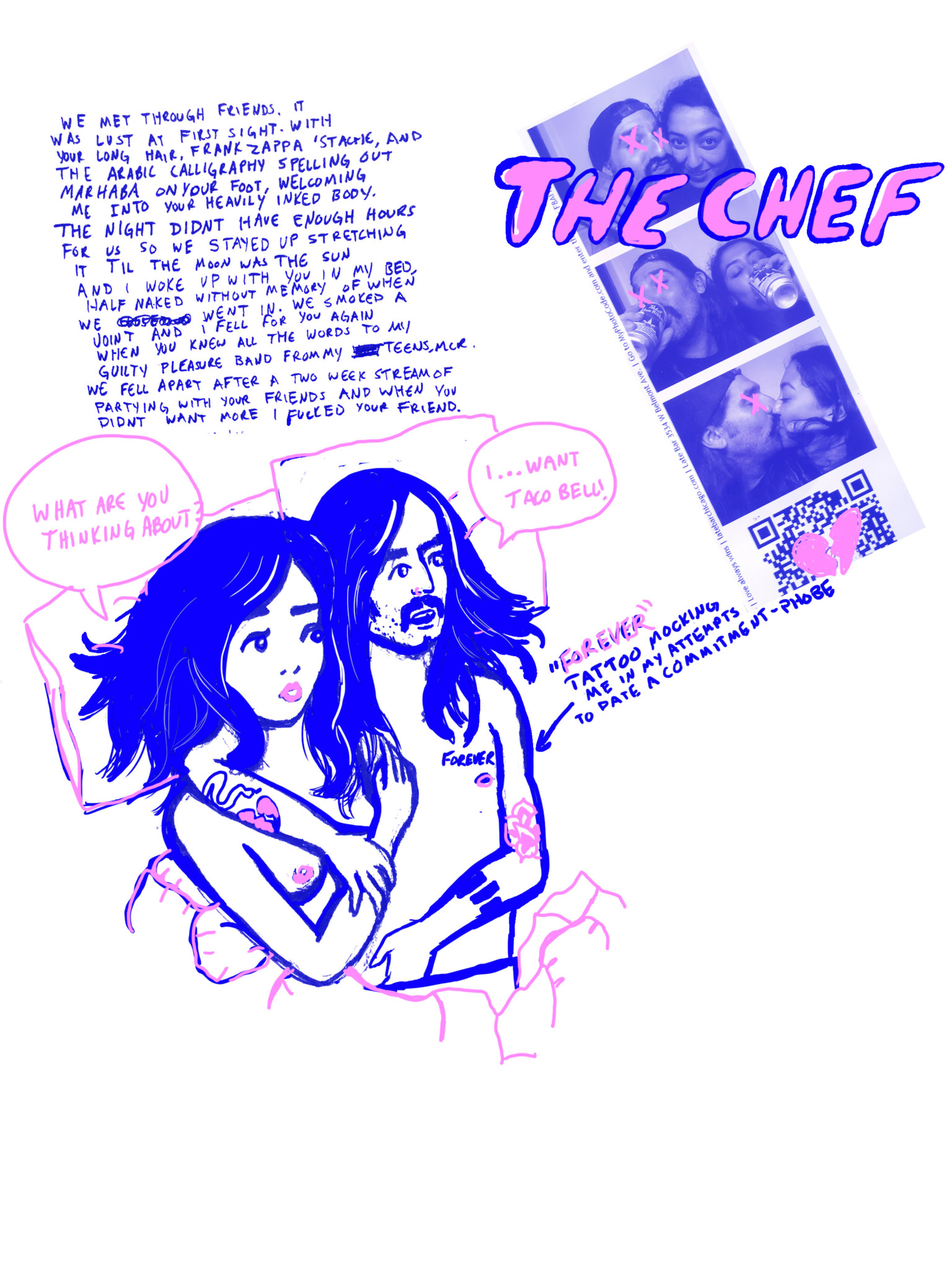 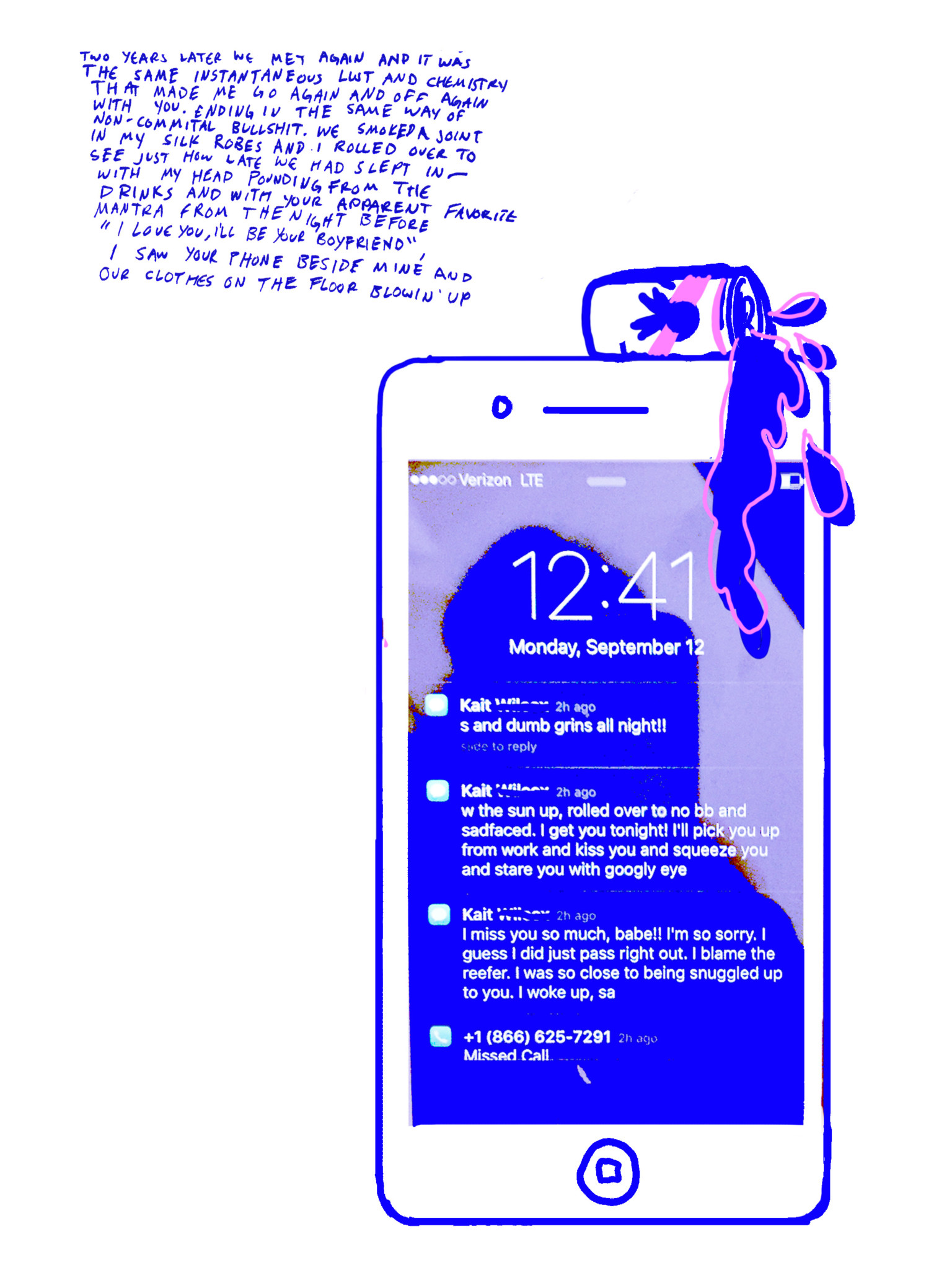 Brown and Proud Press is a collective of people of color with the intent of sharing personal narratives of struggle through the medium of zines as a catalyst for collective healing and social change. These pages are excerpted from their Home Zine—“Casa. Casa. casita” by Daisy Zamora and “Bringing Out the Home in Me” by Luz Magdaleno Flores. 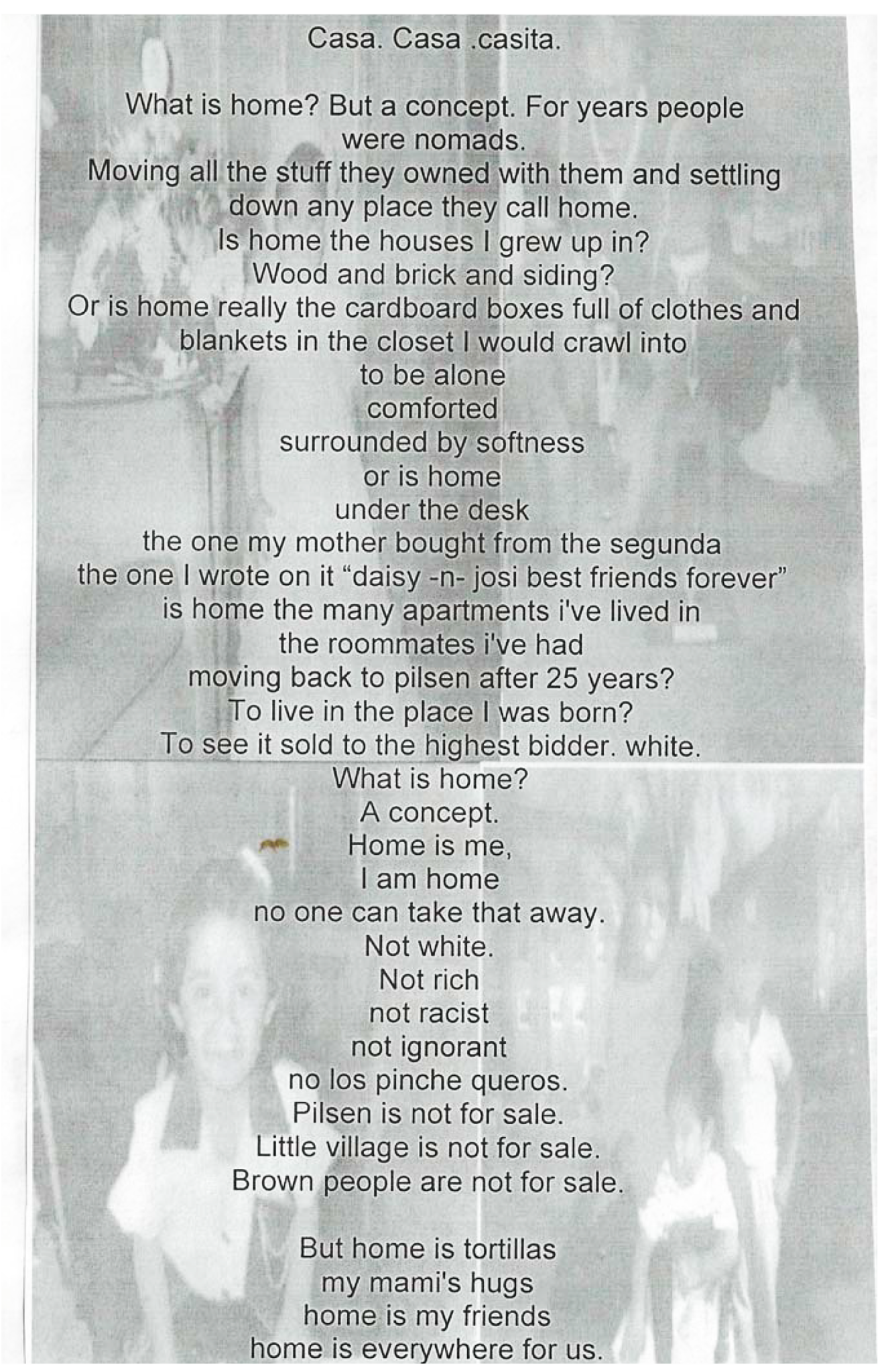 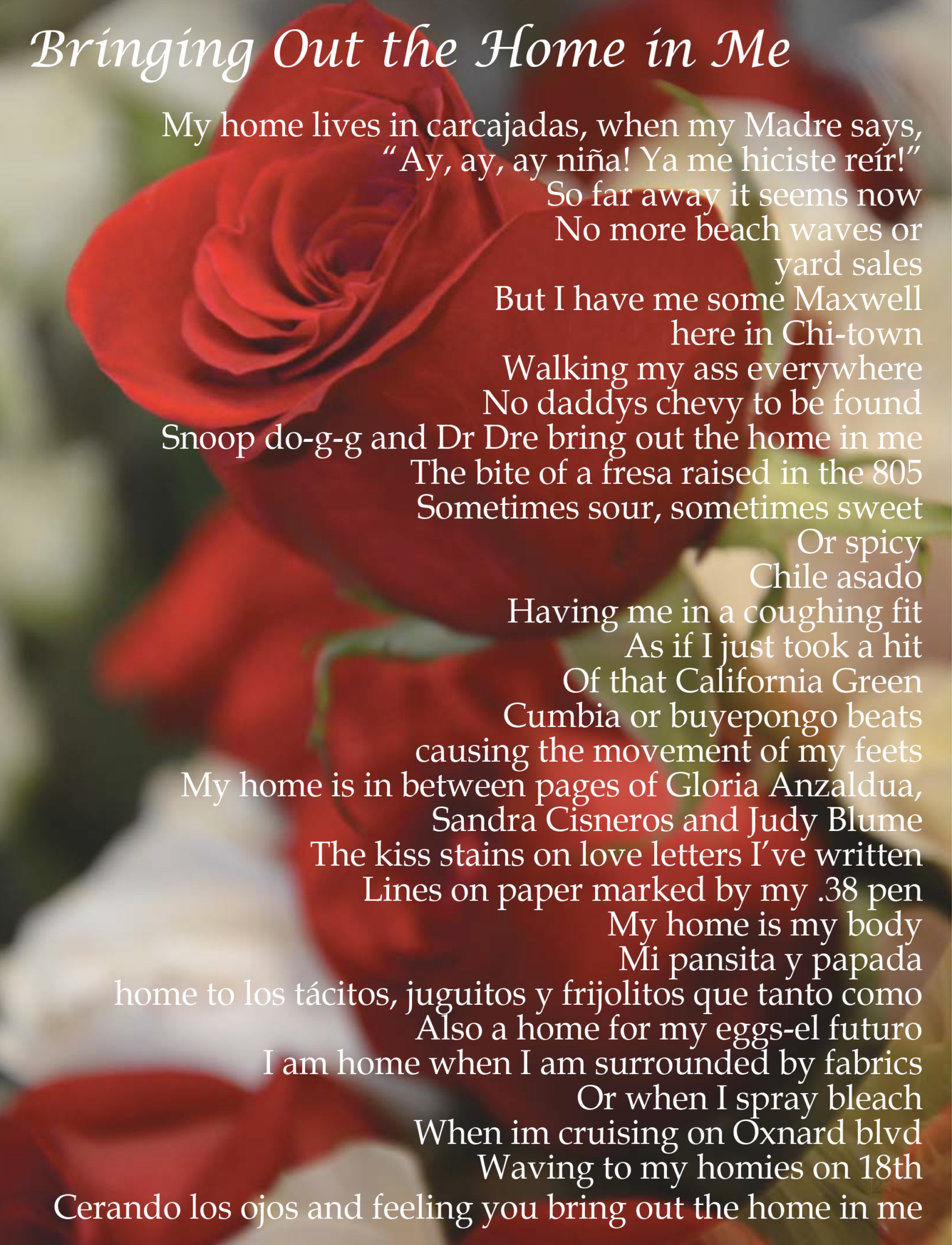 Half Letter Press is a publishing imprint run by Brett Bloom and Marc Fischer, who have been publishing booklets together since 1998. These pages are excerpted from Sonic Meditations by 10 Deep Listeners, a tribute to Pauline Oliveros. 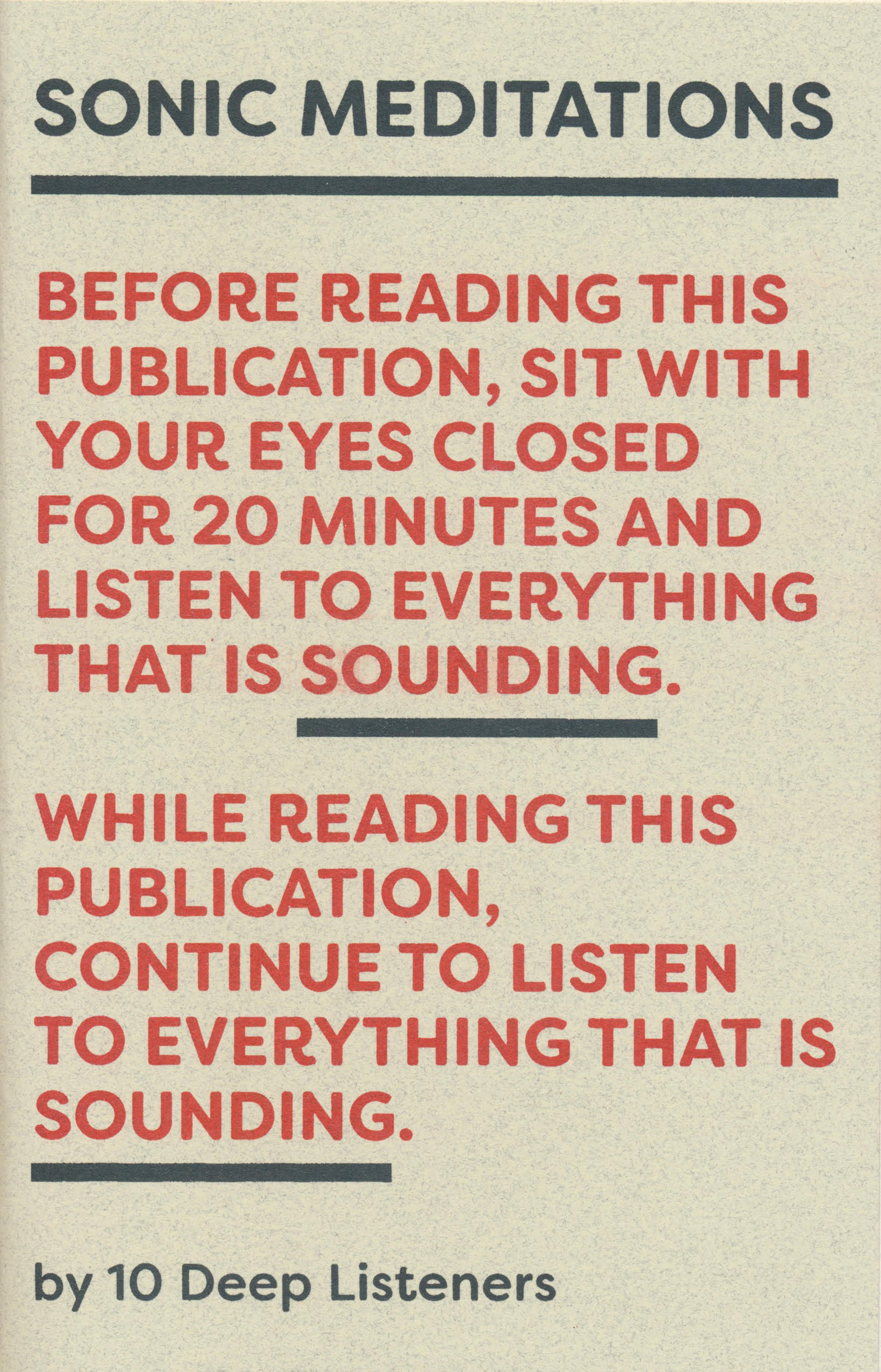 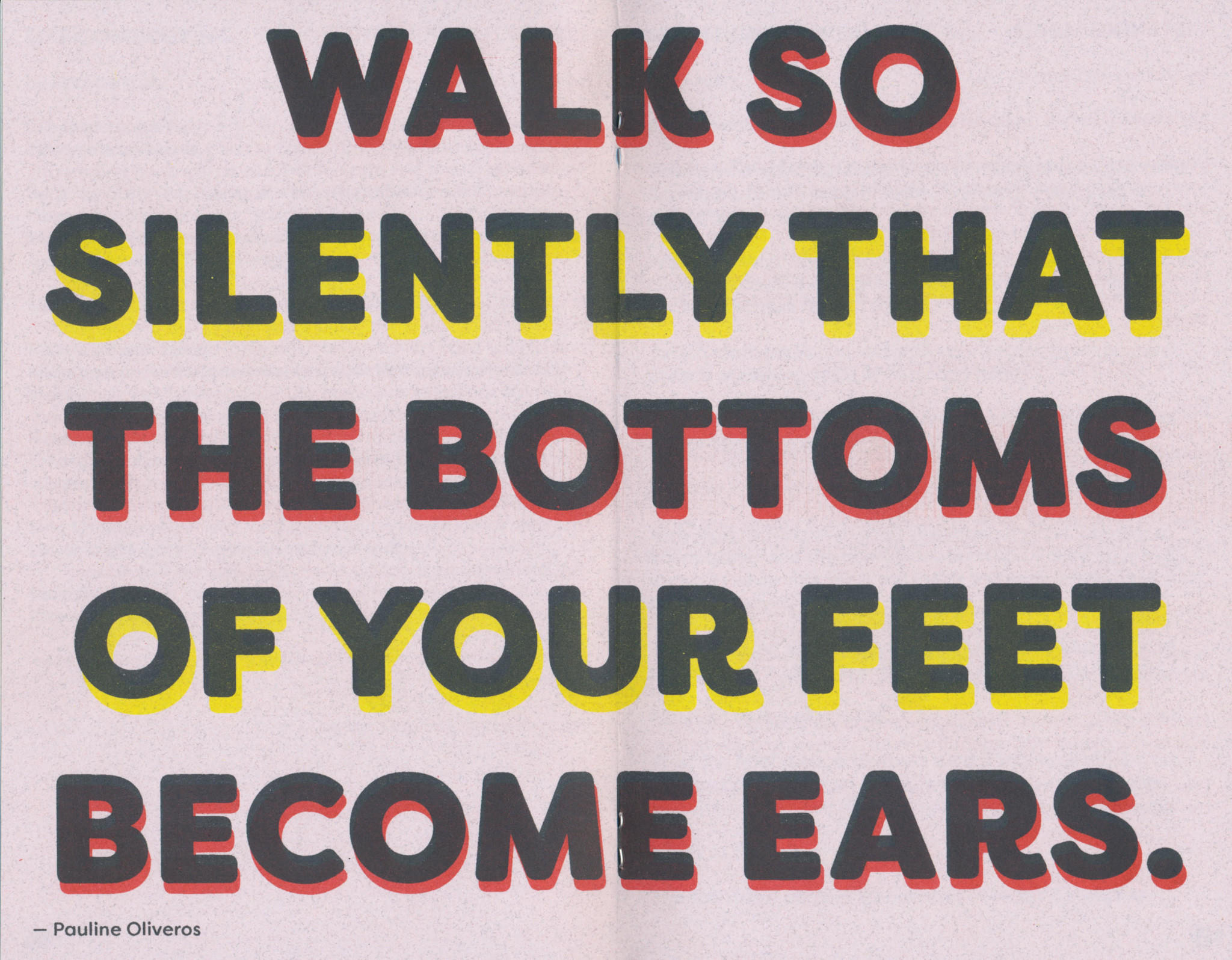 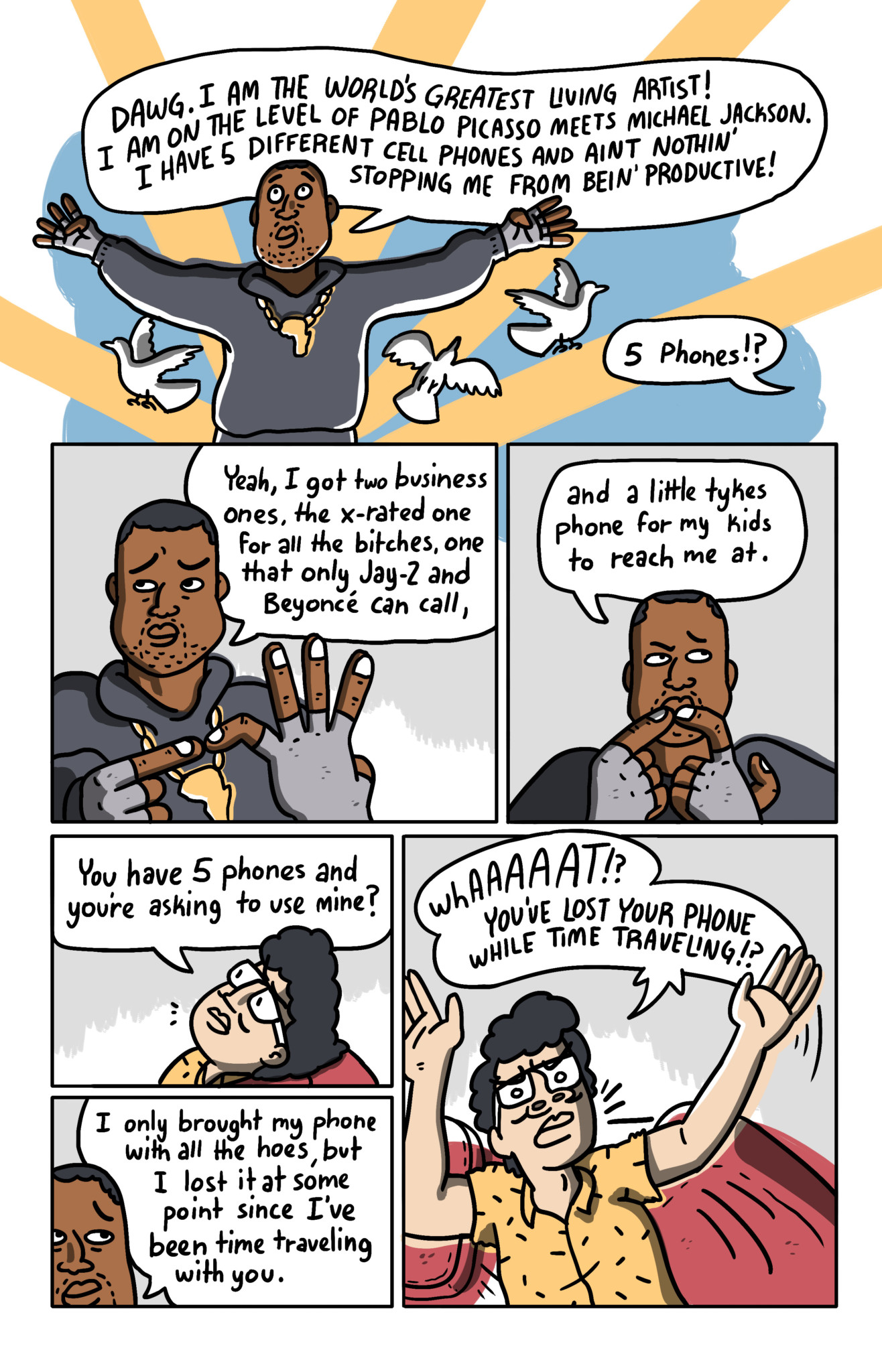 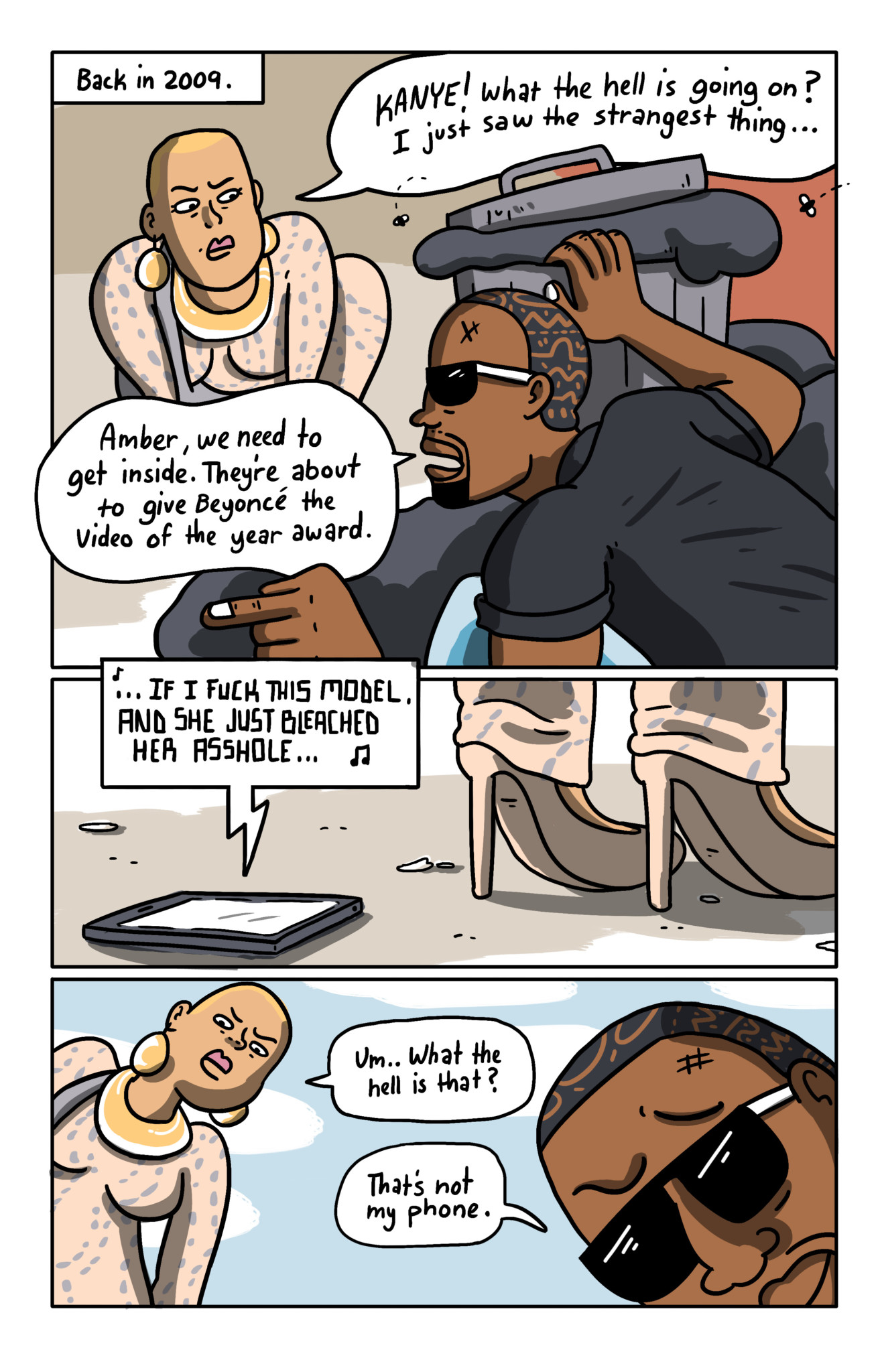 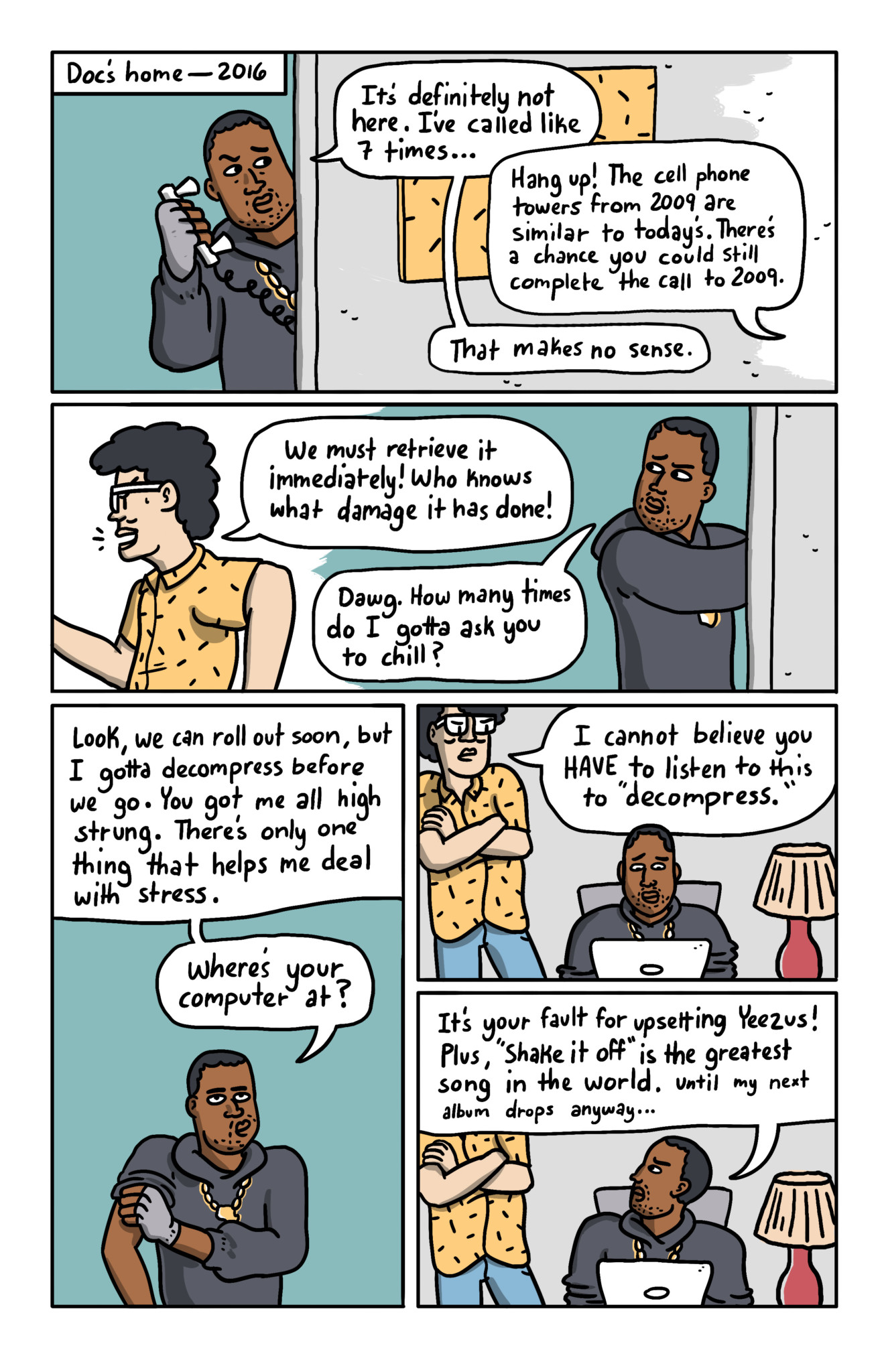 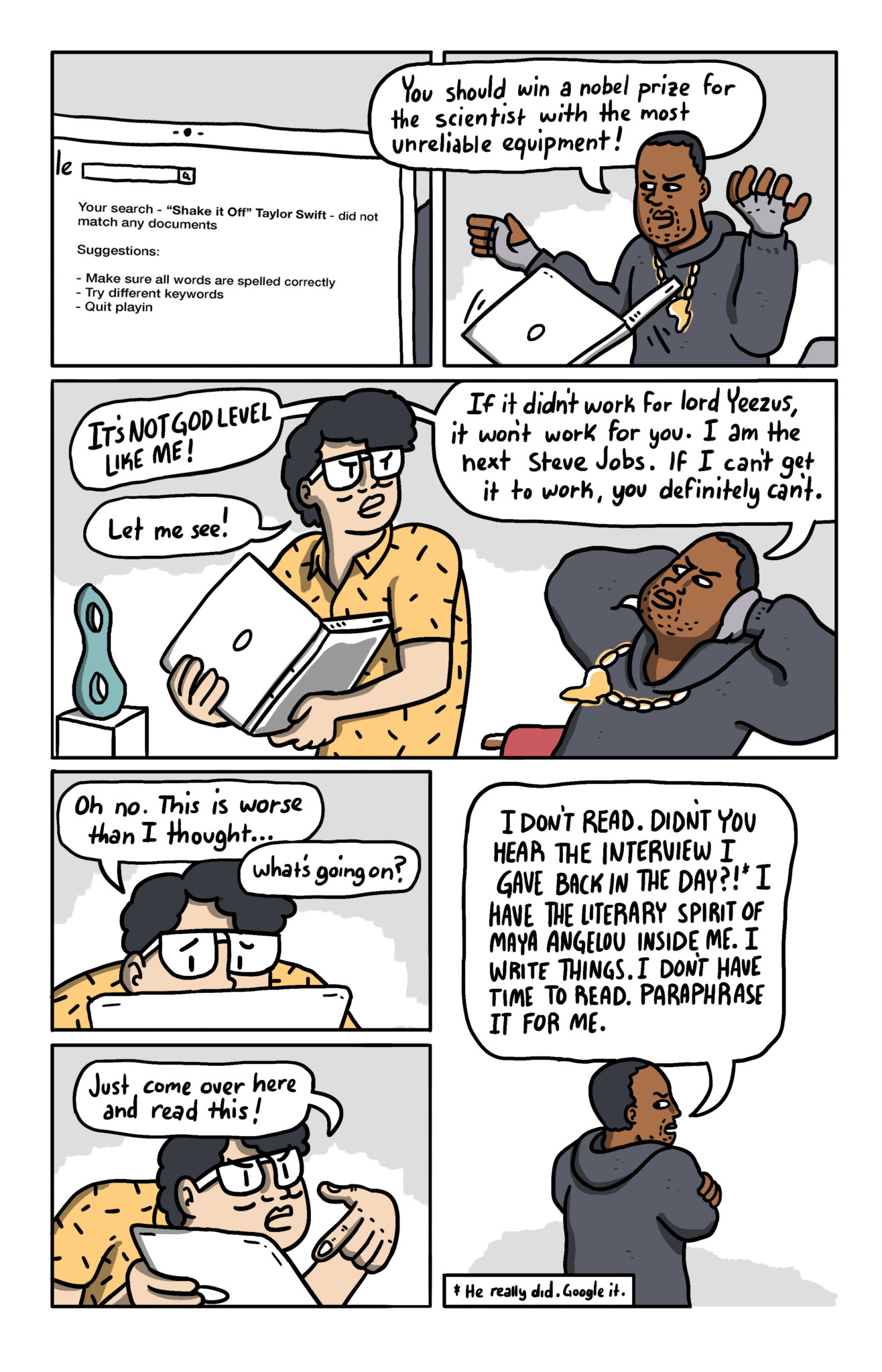 7Vientos is a bilingual publishing house based in Chicago. These pages are excerpted from Mario Bellatin’s novellas Flowers & Mishima’s Illustrated Biography, which have been printed together in both Spanish and English.

They give the impression of being content. Some seem to have reached a certain state of ecstasy, which Mishima suspects may be due to consuming some particular substance. He gathers that in order to reach it, they must have completed a series of spiritual exercises. Shinto rituals, specifically. There are people of different ages. Old women. German children. Two of Mishima’s friends can be found standing on the balcony. From there they take in a wide maritime panorama. Mishima is standing next to a boy. Minutes later, the two leave the terrace. While they walk they come across a man, in front of whom the boy falls to his knees. It bothers Mishima to see him in that position. He returns alone. He sees the shoes that belong to his friends who just seconds before had been contemplating the sea. They have been left abandoned at the edge of the abyss.

Mishima isn’t present at the balcony now. He can be found on a school’s campus where he’s going to give a presentation about Yukio Mishima. At the entrance a series of books are handed out. Translations published in impeccable editions. Suddenly a professor, who looks Japanese, enters the room. Mishima notices that the professor has brought an apparatus that, once it’s set up, will begin to show a film about reality. We are fixated on the screen. The first image shows the quad of a very prestigious institution. It’s the school where we are all gathered. We suddenly discover the shield that serves as its emblem. We think that perhaps the teacher has devised a new teaching method, with the help of the apparatus that he had set up in the middle of the room.

Mishima stays in the room with his air of superiority. He looks like a man in his forties. He dresses in a military uniform and is missing his head. He is a renowned writer and knows that we in the room are merely people with limited cultural knowledge. Among those in attendance, he discovers a woman with whom he had gone to university. Almost without speaking to each other, they engage in a strange exchange of shoes. It’s an ancient custom, but some of the people gathered there seem surprised. Still, a man in the front row applauds the initiative. Mishima then tells us he has imperial status, and that makes almost any of his actions valid. He adds that the lecture will surely begin when the professor asks about Yukio Mishima. He is sure he knows more than anyone else. He tries to remember passages from his own life. All he can think about is the suicide. And the scandal that followed. The memory of his wife hearing the news on her car’s radio. He starts to become delirious, imagining himself as an old man. He sees himself telling a series of classic anecdotes—parables featuring a mouse. All of a sudden his friend from the university—the one with whom he’d performed the odd shoe exchange—presents him with a book that has water and sand trapped in the cover. Inside, embedded in the pages, are splinters and miniscule specks that could be bamboo. Mishima opens the book and is astonished.

In its pages is a photo of an object with a short caption next to it. Just an object. In the middle of a void. And a sentence of three or four words. Something delicate. Mishima plans to create something similar. He wants to put together a book like this one, with some text and an object. First he thinks maybe he’ll use elementary school picture flashcards to put it together. Then he feels it should be something cleaner. He decides that he’ll take pictures of objects with a camera given to him as a child. He’ll find an empty space, just white, and there begin to place, one by one, the chosen elements.

Mishima knows that the images taken with the camera given to him as a child would never be seen by anyone. In a way, those figures never existed. It was so difficult to work that instrument, so hard to find a good darkroom in those days, that for Mishima the act of taking pictures was more like a simulation. The result of the process never seemed important. The rolls of film from that time remained completely forgotten.