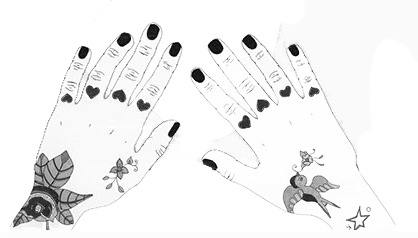 There’s a warm glow in the eighth floor penthouse of the Logan Center for the Arts, despite the falling snow visible through the floor-to-ceiling windows. People pile in, vying for spaces in the front rows. Even more wait outside hoping to gain access to a space that has already hit its fire code room capacity. Audience members have come from Hyde Park and all around Chicago and its suburbs to experience the performative work of a group of artists known as Sister Spit.

Sister Spit could be described as a feminist spoken word collective, but that wouldn’t do justice to everything they have accomplished since the group’s inception in the early nineties. Sister Spit has undergone several transformations since its founding in 1994.

After Sister Spit disbanded in 2006, organizer and backbone Michelle Tea reinvented the collective to reflect the diversity of its expanding audience. The new generation includes emerging artists of different gender expressions, sexualities, and races. Before hitting their final destination at the South Side,they spent the year travelling to the east and wests coasts.

The group’s transformation also included a change in the spaces in which the group has performed over the years—from bars and underground venues to university campuses. This has impacted how receptive different audiences have been to their work as well, especially within the context of academia’s traditionally exclusive framework.

Kristen Schilt, a professor of sociology at the University of Chicago who specializes in transgender and queer studies, collaborated with Toronto-based transgender multimedia artist Chase Joynt to bring Sister Spit to Hyde Park as a part of “Tell Me The Truth,” a year-long collaborative project.

“We want to explore the concept of ‘queer collaboration,’ ” explains Schilt, in the empty pre-show penthouse, “which is the idea of queer people working together to parse identity in a performative way.”

The evening’s emcee, Chinaka Hodge, Bay Area playwright, poet, spoken word artist, and rapper, greets the audience with a galvanizing “Turn down for what?” chant before welcoming Joynt, to the stage as the first artist of the night. He reads a short story relaying his experiences as a transgender man and draws uncontrollable laughter from the crowd.

Up next is Haitian-American poet, playwright, and musician Lennelle Moïse. She artfully mixes vocal sounds and spoken word to create a powerful and moving performance about her experiences as a black American of Haitian heritage.

But we do not only hear spoken word—there are visual projections, short films, excerpts from novels, and zines, all of which exude a distinctly DIY aesthetic often tied to the queer and underground communities Sister Spit firmly nestles itself in.

Virgie Tova, a scholar who specializes in the emerging field of fat studies, commands the respect and attention of the silent penthouse with a reading of her experiences as a fat child and fat adolescent, while technical director Jerry Lee Abram sheds all pleasantries with a story about his experience in a gay strip club and the Sex Workers’ Art Show.

During one of the transitions between artists, Hodge tells us that we are the most diverse audience they have encountered on the tour.

Hodge closes with a poem that she claims to have written seconds before her performance, conveying the sense of camaraderie the collective established over the course of their tour.

“We didn’t know each other before getting into that van, and now I trust each and every one of these people with my life,” says Hodge. It is this sense of togetherness and safety that permeates the evening and extends into the minutes-long standing ovation as the artists make their final bow.